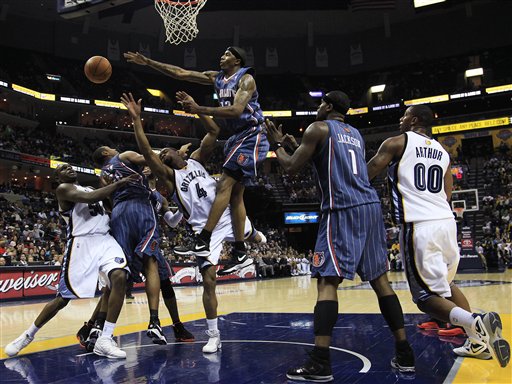 The Charlotte Bobcats have a number of pressing issues/weaknesses to deal with as the regular season looms.  Chief among them is probably the point guard dilemma, but close behind is the five spot.

Despite projected starter Tyson Chandler’s disappointing and injury-riddled campaign last year, the Cats actually got decent play from the spot.  Out of necessity, Larry Brown went with a center-by-committee approach and it worked.

Out of necessity, he’ll do the same this season.  Unfortunately, it’s unlikely that we’ll be as pleasantly surprised by the results.

When Chandler was ineffective at the start of last season, Nazr Mohammed saw increased minutes and impressed.  When Chandler had to completely shut it down for a big hunk of the middle of the season, Nazr assumed the starting role.  Fortunately, he was in great shape and had an exquisite, veteran’s understanding of Larry Brown’s system.

Mohammed turned in a career-best 19.64 PER, largely due to hitting the boards hard and hitting a high percentage of his shots (55.3%).  The league average for PER is 15, and Dwight Howard notched a 24.07 last year, so that gives you an idea of how good Mohammed was last season.

Mohammed enters the season as the projected starter, and will probably be called on to play more minutes than the 17 per game he averaged last year.  Great, right?

Probably not.  As ESPN.com’s PER-father John Hollinger has explained, players who suddenly have a big jump in their productivity/efficiency late in their careers rarely sustain it in subsequent years.  He calls it the “fluke rule” and the 33-year-old Mohammed certainly qualifies for it.

Hollinger’s statistics suggest there is over a 90% chance that Mohammed’s play will regress by about 3 PER points.  This would put Mohammed back around his career PER average, so if it indeed happens, it would serve as a regression to a personal mean as well as an example of Hollinger’s fluke rule.  To conclude, statistics imply that Mohammed will return to being a slightly-above-average player this season.

Don’t buy dorky statistical arguments?  How about the simple age/health argument?  Not evident amongst last year’s sparkling PERs and percentages is that Mohammed did eventually break down.  After a particularly strong 5-game stretch to begin last February in which he averaged over 31 minutes a game, Mohammed began suffering back spasms.  He gutted out a few more games, but ultimately sat out about two months.  He returned late in the season looking nothing like the guy who had started 29 games earlier in the season.

Now as anyone who follows Naz on Twitter knows, the guy is serious about keeping himself in shape in the offseason, so we can hope for the best.  But at 33 years old and with a history of back issues, logic dictates that it is unlikely that Mohammed will be able to offer more than 15-20 minutes per game and/or more than 60-65 games this season — which brings us to our next subject.

Due to a combination of foul trouble, injury concerns, and general ineffectiveness, Tyson Chandler wasn’t able to provide more than 20-25 minutes per game even when he was available.  So when Nazr’s back went out, Larry Brown was faced with the possibility of giving Gana Diop big minutes.  The horror.

Fortunately, Brown’s buddy Gregg Popovich had Theo Ratliff collecting dust on the end of his bench in San Antonio.  Essentially given to the Cats for free at the trade deadline, Ratliff was key to the Bobcats stretch run as they held on to a playoff spot.  The ageless wonder/freak of nature stepped in and competently manned the middle.  Ratliff was thus rewarded with a guaranteed $1.3 million dollar one-year contract with the Lakers for the upcoming season, his 16th in the league.

Gana Diop is unspeakably bad on the offensive end.  I’ll spare you the statistical analysis because I think we can all agree that it’s like playing 4-on-5 when the Cats have the ball.  Diop may be an above average shot-blocker and decent rebounder on the defensive side, but it doesn’t make up for the brutality of his offensive game.

Nonetheless, I expect that in the upcoming season, Diop will easily top the 262 total minutes he played last season, if only because he’s one of only two true centers on the roster.  There has been a little noise during training camp about Diop being in better shape, maybe even showing some improvement on the court.  But if Diop has to regularly average more than 8-10 minutes per game, the Cats are in huge trouble.  I figure he may be able manage about 5 minutes per game, depending on the matchups.

So who do the rest of the minutes at the five go to?

No surprise here.  The Cats frequently ended games last season with a smallball lineup featuring Boris or Tyrus effectively playing center.  Though he is one of the least athletic players on the roster, Boris is one of the better on-ball defenders.  He’s big, smart and patient, and can handle many of the other centers in the league.  Tyrus, on the other hand, is one of the most athletic players on the roster.  He’s not a great on-ball defender at this point; instead his specialty is coming from the weak side to block and disrupt shots in the paint.

My guess is that Larry Brown will usually end games this year with a lineup of DJ (or Livingston?), Jack, Crash, Boris and Tyrus.  And the difference is, this year I would expect to see Boris and Tyrus as the only bigs for stretches in the first half as well.  Maybe Dominic McGuire as well.

Boris was mentioned in a couple different trade rumors this offseason.  There were several reasons those trades didn’t go down, but one that was whispered a few times was that Brown was reticent to give Diaw up.  Boris is one of the top five talents on the roster, but that’s not reason alone to be so particularly averse to trading him; you have to give to get in a trade.  No, the reason is that, due to the Bobcats lack of a true, 30-35-minute-a-game, #1 center, Boris is going to be playing a lot of minutes at the five this season.

So there you go.  The Bobcats are thin at the five.  Larry Brown will again try to cobble decent play at the spot out of the available talent, but there’s even less there than last year.  Our playoff aspirations rely upon Mohammed replicating his 2009-10 season while staying even healthier than he did, and the Cats being able to play smallball for around 15-20 minutes per game.