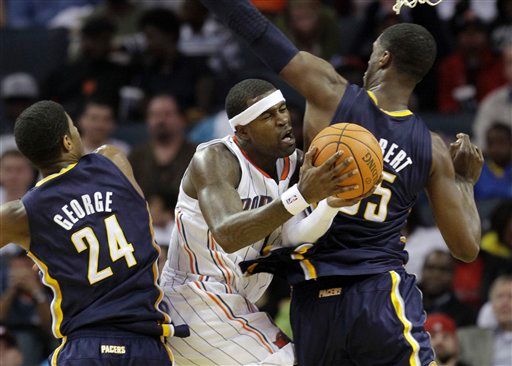 The Charlotte Bobcats dropped their home opener 104-101 to the Indiana Pacers on Friday night.  The Cats led most of the game, and by 5 with 3:18 left, but crumbled after that.  Both DJ Augustin and Stephen Jackson got decent looks at potentially game-tying 3s on the last possession, but neither found the mark.

There were multiple problems down the stretch.  The Cats had several fourth-quarter turnovers.  With 3 minutes left, Gana Diop got stuck on Danny Granger after a screen; Granger nailed a 3 (his sixth of the game) and goaded Diop into a soft foul for a 4 point play.  DJ Augustin couldn’t contain TJ Ford on the pick-and-roll.  Gerald Wallace missed two free throws.  And Tyler Hansbrough, of all people, scored the last four clutch points for the Pacers.

This is the kind of game that the Bobcats won last year.  At home, against a team of the Pacers caliber, they would have put the hammer down in the fourth quarter — instead they gave up 31 points in the last 12 minutes (not to mention 104 overall).  At the very least, last year’s Bobcats would have made a big play or two in cruchtime to eke out the win.

But this year’s edition of the Bobcats is not as tough defensively with DJ on the court, and isn’t getting the decent play from the center platoon that it did last year.  Those issues aren’t surprising; but one thing we hadn’t predicted was Stephen Jackson’s slow start.

Following his lackluster performance Wednesday night against the Mavs, Jack got into early foul trouble against the Pacers, limiting his first half minutes.  In the second half, he still couldn’t really get anything going.  Jack finished with just 10 points on 4-13 FG (0-3 3pt), though he did add 6 rebounds and 6 assists.  It’s not clear what the problem is, if there’s a problem at all.

Maybe it’s the ankle he tweaked earlier this week in practice.  Maybe the threat of quick technicals is mellowing his harsh.  Whatever it is, let’s hope that Jack breaks out of his funk Saturday night in Milwaukee.

9 thoughts on “Bobcats Turn Home Opener Over To Pacers”