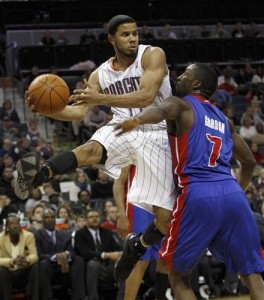 After nearly blowing a 22-point lead, the Bobcats held on to narrowly defeat the Detroit Pistons in Paul Silas’ first game as interim head coach of the Bobcats.

First off, I’m tired. I worked during the game tonight, which included being on my feet for about five hours. I recorded the game on Tivo and watched it when I got home. Due to my exhaustion, I’m forgoing my usual game recap format for just writing tidbits in bullets.

Here’s to Paul Silas and his future with the Bobcats!