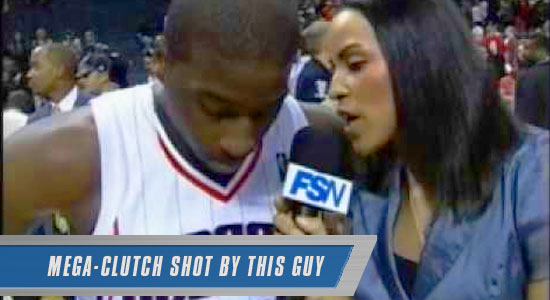 Despite injuring his ankle a day earlier in practice Raymond Felton was determined to play Tuesday night. The Washintgon Wizards probably wish he’d stayed on the sidelines in a suit. With just seconds left on the clock and the teams tied at 92-92, Felton handled the ball, drove left and stepped-back for a  jumper contested by Wizards guard Randy Foye. With the release of his shot, Raymond made sweet love to pressure – in front of the 7,000 or so fans at the arena, Michael Jordan, Alexis Ajinca, Stephen Jackson, and the rest of his teammates. The shot had put the Bobcats up 94-92, giving Felton’s agent a video clip to play on repeated loop while negotiating his deal with Charlotte this coming off-season. Washington was left with 1.9 seconds and a failed scoop shot attempt from Antawn Jamison before the buzzer sounded, their loss was official, and Rufus celebrated on the court for the last home game before the All-Star break.

Considering their recent woes, it was surprising that the Wizards showed some fight in this game. Both teams took turns making runs and neither club looked to control the game for more than a minute at any point in the contest. Washington’s big men are surprisingly good.  Jamison (16pts), Haywood (12pts), and Blatche (15pts) can all hit from the inside and work their way in the paint. Those skills proved to be a bit of a problem for Nazr Mohammed and Boris Diaw early in the game. Over the last couple of weeks, most Cats fans have become exhausted by watching Diaw pass up good shot attempts to find his teammates for lesser opportunities.  This game showed the kind of performance Diaw should aim for on a consistent basis.  Boris was able to knock down outside shots to help spread the floor for Charlotte, and he made smart moves without the ball for easy buckets around the rim. It should be noted that he even threw down a two-handed jam at one point!

Going into the game, the Bobcats made the decision to activate Tyson Chandler after the foot injury that had shelved him since late December.  While Tyson wasn’t the difference maker in this one, he showed that he can contribute to the squad. Some of his mistakes were more mental than physical, improperly switching on the Wizards high pick-and-roll to leave DJ or Flip guarding a big man in the paint. With the addition of Stephen Jackson, this team has found a better flow on offense and Chandler may have an easier time of finding his place in their pecking order as he returns to action at this stage of the season. During the second quarter, it was nice to see DJ work to find looks for Chandler. One one possession, Augustin slid past two defenders into the paint and had an open look at the rim. He chose to lob a pass for a Tyson throw-down rather his own score.  The crowd definitely appreciated those two points a bit more than a DJ layup.

Raymond Felton surely gets the player of the game for his toughness to suit up and hitting a mega-clutch shot to close the game.  Gerald has become so steady that his 17pts / 13 rbs seemed expected. He never took over the game, but he did pose a threat throughout each quarter. The Bobcats had 5 players in double digit scoring, led by Stephen Jackson’s 22pts. Ronald “Flip” Murray put in a strong offensive performance (16pts), and once more proved how much the team needed points from their bench.

Check out the blocky cartoon version of Crash on the Fan Face Off online video game! Also, there’s a new Gerald Wallace video about the Dunk Contest on NBA.com.

About the game – the Washington Wizards seem to hate each other. Maybe the team has rid themselves of the rumored divisiveness caused by Gilbert Arenas, but the guys don’t seem to enjoy each other one bit.  Like a married couple that everyone knows should be divorced, they had some great times a couple of years ago. They had some laughs in the past, but these days everyone can see that they despise each other.  Each party involved would be happier going their separate ways. Caron Butler, who took over the game during the fourth, doesn’t even stand near his teammates during the breaks in the game. Only a few players even got in the huddle to listen to Coach Flip Saunders (no relation to Flip Murray).  The Wizards need to bust this up and build upon the big men they have in place. Trade rumors have swirled around Jamison and Butler. From an outside perspective, it looks like this is the best time for those guys to leave.

Speaking of trade rumors – ESPN and The Charlotte Observer have posted speculation of trade talks with Boston on their web sites. Supposedly, there is some type of DJ Augustin for Glen Davis deal in discussion.  Additionally, the Observer’s Rick Bonnell reports that the Cats might be more inclined to deal with NY (Jordan Hill) or Chicago (Tyrus Thomas).

Let us know what you think about these possible trades.