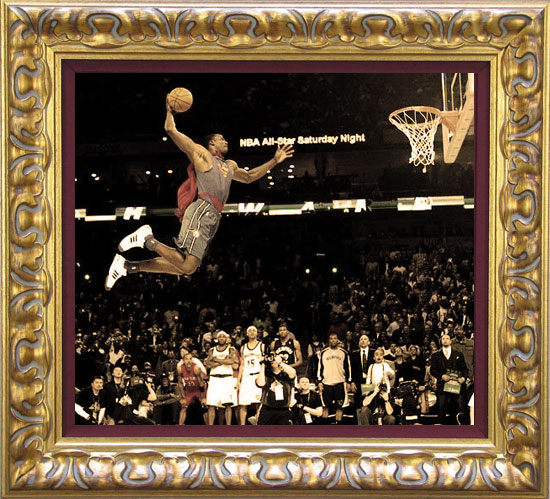 Nothing in this world happens in a vortex.  All is connected and in this connection comes the dynamic results that we refer to as life.  How we perceive stories is no different.  We’ve heard a lot about “framing” in recent years in regards to how political issues are “framed” in the mass media.  Is the issue “Should the US military increase its efforts in the Middle East: Yes or No” or is it “Should the US even be involved such international conflicts at all?”
The world of sports is no different.  In the aftermath of the Orlando sweep three weeks ago, Bobcats fans and pundits collectively framed the argument as “How bad are the Charlotte Bobcats and What Needs to Happen to Make them Better?”  Now, with the added dynamic of time and another reference point by way of the Orlando/Atlanta four game non-series, the frame in which we view the ’09-’10 Bobcats changes once more.

The Magic absolutely decimated the Atlanta Hawks in four games by a combined total of 101 points.  Average that out and the Hawks lose by 25 points a game.  Those are blowouts, folks.  The Magic averaged a blowout for the series.  Contrast that with the now suddenly respectable Bobcats sweep in which the ‘Cats lost four games by a combined 37 points, averaging out to a little over 9 points per game.  If the Magic manhandle the revitalized and dangerous Celtics in a seven game Conference Final series, then we’ll have to re-frame the Bobcats First Round exit yet again.

The point is that without playing another second of basketball, the Bobcats don’t look as bad as they did three weeks ago.  You could argue that if they had they drawn ANY OTHER TEAM in the first round besides the Magic (and maybe the Celtics) they would have either had a real shot at winning the series or at the very least would have avoided a sweep.

Don’t get me wrong, the Bobcats still have many things to take care of over the next five months.  The Eastern Conference isn’t standing still and there’s a good chance that New York and New Jersey will be much improved by early July.  The ‘Cats are going to need to resolve a few major issues in order to stay in the Top Eight:

The Bobcats aren’t far away from becoming a second round (plus) team next season.  Having Jax, Tyson and Tyrus for another year with Wallace will help.  As we’ve seen from the Spurs, Lakers and Celtics during the Playoffs, consistency + familiarity goes a long ways and can give you an added edge in the postseason.