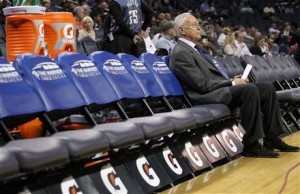 "I wonder if I can get a coach's discount on beer during this game." (AP Photo)

Being able to admit when you’re wrong is a difficult thing to do, especially when your genes conspire to make you stubborn, like mine do. I was a complete proponent of Larry Brown the past couple years – and that’s putting it very lightly. In retrospect, I think I put a twist on many of the Bobcats’ moves to give Larry Brown the benefit of the doubt. And now, I’m reaping what I sowed. The team is floundering with a future that will take franchise-altering moves to improve. Luckily, the Bobcats took a Roald Dahl BFG-sized step in the right direction by coming to a mutual decision with Larry Brown for the high profile coach to step down from his position (read: canned). I had been calling for this for a few weeks and now that it’s here, I’m left with some very mixed feelings that in the end make me feel like a complete fool.

The Bobcats had been stewing in mediocrity for years before Larry Brown but it seemed they were building each year until Sam Vincent pooped the bed. While outclassed in talent on nearly a nightly basis, the team consistently put forth their best effort while a city conceitedly ignored them.

It would take a huge splash to divert attention from Charlotte’s darling NFL franchise, the Panthers.

Then the Bobcats’ Managing Member of Basketball Operations and minority owner, Michael Jordan, would use his Carolina connections to make such a Louie Anderson-sized cannonball by signing the only coach to win an NBA Championship and an NCAA Championship, Larry Brown.

Without a doubt, it was the best hiring in the Bobcats’ short history. And many wondered how he would change this team that was not built for his style of basketball. It didn’t take long as the Bobcats drafted D.J. Augustin (at the behest of Brown) and traded a future first round pick for the draft pick that would become Alexis Ajinca. Then they traded Jason Richardson, Jared Dudley and the Bobcats’ second round pick in 2010 for Boris Diaw, Raja Bell and Sean Singletary. While I maintain that that trade is essentially a push, considering J. Rich’s defensive liabilities, the following trade relinquishing Matt Carroll and Ryan Hollins for DeSagana Diop was an utter mistake, inadequately trying to fill a glaring need at the center with a bloated contract. They also rid themselves of Adam Morrison via a trade with the Lakers that gave up the mustachioed marauder and Shannon Brown for Vladimir Radmanovic.

And yet, Larry Brown pushed that 2008-2009 Bobcats team to a playoff push that would ultimately come up short, playing (and losing) six of their final eight games on the road due to Bob Johnson’s equestrian garbage (no offense equestrian readers!). The team was playing “The Right Way,” which consisted of strong defense and an offensive strategy of forgoing mid to long range jump shots in favor of slashing to rim for higher percentage shots and getting to the line for free throws.

Going into the next season, the Bobcats were looking to build on their near-miss off the playoffs from the previous season. They drafted Gerald Henderson and Derrick Brown and then traded the Bobcats first-ever draft pick, Emeka Okafor to New Orleans for Tyson Chandler.

Entering the 2009-2010 season, the Bobcats stumbled out of the gate like a Dwayne “The Rock” Johnson kids movie on opening weekend. Raja Bell suffered what would ultimately be a season-ending injury and the Bobcats were 3-7 with wins over a terrible Knicks team, the god-awful Nets and (somehow) the Hawks. Seeing a need for change, the Bobcats decided to trade Vladimir Radmanovic and Raja Bell for Stephen Jackson and Acie Law IV. The move would pay off in dividends as Stephen Jackson would help lead the Bobcats to their first playoff appearance. With Larry Brown’s defensive mind, he would also help form a dangerous defensive backcourt with Gerald Wallace and Raymond Felton as the three would all finish in the top fifteen in steals that season. And before the trade deadline, the Bobcats completed two trades: 1) Acie Law IV, Flip Murray and a future first round pick for Tyrus Thomas; and 2) a future conditional second round pick for Theo Ratliff.

During that season especially, I was essentially a Larry Brown sycophant. As a small Jewish kid who loves basketball and particularly is fervent about the defensive side of the game, I was big on Larry Brown. He had helped make my favorite Bobcat an all-star and he had brought the Bobcats to the forefront of Charlotte’s mind after a disappointing Panthers season. He didn’t dance around questions or mince words like Panthers coach John Fox. Some of Charlotte’s skyscraper’s lit up orange at night for the playoffs. It seemed he was making Charlotte basketball-crazy once again, for which I have been waiting for years. I even made the below sign, choosing to ignore that I knew at least one of these players would be gone the following season. I think I'm most proud of the Boris Diaw in this poster. I really captured his essence.

But I was ignorant. And when I wasn’t ignorant, I was shrugging off the obviously horrible decisions.

Drafting D.J. Augustin – Don’t get me wrong, drafting Augustin wasn’t the problem, although drafting Brook Lopez would have been a much better decision. The problem is that Larry Brown made this draft pick and then in the years that followed, eroded the point guard’s confidence by holding Augustin back in his sophomore slump season.

Trading for the Pick and Then Drafting Alexis Ajinca – If you’re trying to win now and get to the playoffs ASAP, why would you trade for a pick to be used on Alexis Ajinca, a project if there ever was one? The guy was unheard of and raw. DeAndre Jordan would have been a much better pick. And we gave up a future first round pick for him. What became of Alexis Ajinca? We traded him for zilch. To sum up this move, the Bobcats traded the #16 overall pick in the 2010 draft for nothing in return. EVERYONE, FACEPALM NOW.

Trading For DeSagana Diop – This was just bad all around. The Bobcats sinned first by re-signing Matt Carroll in 2007 to a mind-boggling 6 year, $27 million deal. Then they remembered they had a huge defensive problem in the frontcourt so they decided to take on more salary by trading Carroll and Ryan Hollins for the Big Diopper. But don’t worry everyone, we got Matt Carroll back later, basically free of charge!

Trading Okafor – This trade could be a push but we got essentially nothing in return for Okafor. He was and still is one of the best defensive centers in the NBA, though a smidge undersized. The Bobcats traded him for Tyson Chandler. This wouldn’t have been bad if Chandler could have stayed healthy. However, he couldn’t and struggled with problems throughout the season, usually coming off the bench and often contributing more fouls than rebounds.

Refusing to Develop Young Talent – I hoped Larry Brown would change. I knew that he had the reputation of not playing his young players, but in his first year, he gave D.J. Augustin a good amount of playing time. Maybe he would abandon that trait while coaching the Bobcats? Alas, it was to no avail. The following year, Brown played Augustin sparingly and didn’t play Henderson much at all, opting for the world-beater, Stephen Graham. But even that was somewhat understandable – Graham had some defensive fire and played the Larry Brown slasher offense, although he was mistake-prone and had a very low ceiling. Mild frustration became mild anger for me the next year when developing rim-rocker Derrick Brown was not given much of any time off the bench, choosing to play little-known forward Dominic McGuire much more minutes. This move was not anticipated by anyone (outside of Larry Brown). A slightly above-average rebounder and defender with an anemic offense, McGuire was scraping his ceiling in the present while Derrick Brown was stuck on the bench. For those who don’t know, Derrick Brown is a high-flying forward that can get to the rim at will with some decent defense and a mediocre jump shot. It is important to note that while Derrick may never be an all-star, he has the potential to be a starter in the NBA within a few years – IF he is given time on the court to develop his game against the rest of the NBA.

So, combined with Larry Brown handicapping the Bobcats future by refusing to give the young players playing time to develop their game and eroding their confidence, Larry Brown’s coaching/GM style put the ball & chain on the organization by making cost-increasing moves that kills cap space and by trading away first round picks.

That said, he brought the Bobcats their first playoffs, which I’ll remember forever. Larry, thanks for the good times and hopefully in the future, I’ll forget the bad times. But I don’t count on that being any time soon.