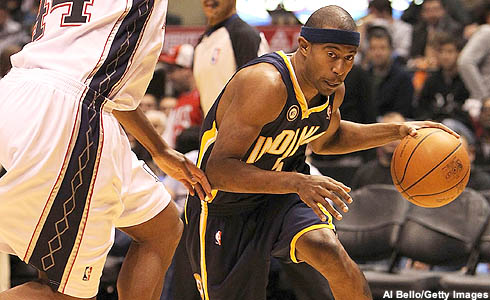 Phew!  On the heels of the Tyrus Thomas trade, rumors started flying via NBA insiders on Twitter a little after 2 PM ET that the Bobcats were in discussions with the Indiana Pacers to obtain guard TJ Ford for DJ Augustin.

Yahoo! Sports’ Adrian Wojnarowski was all over it via his Twitter feed, quickly following up that the proposal had expanded to TJ Ford + Brandon Rush for DJ + Nazr Mohammed + Gerald Henderson.

This seemed to me like grand larceny for a guy who was pretty much deemed untradeable in recent months.  Ford has fallen to third on the Pacers PG depth chart and was benched for all of January before breaking back into the lineup in February, presumably to audition for prospective trade partners.

We’ve watched DJ go through a brutal sophomore slump this year, and we’ve known for several weeks that the Bobcats were dangling him in trade talks.  We’ve also watched Gerald Henderson struggle in limited minutes in this, his rookie season.

But to give up both these young guards PLUS Nazr Mohammed, who has been so solid in this renaissance season, sounded way off to me.

Fortunately, as the trade deadline loomed closer and closer, Wojanarski’s tweets seemed to indicate that the Cats were pretty far away from making this trade a reality.  Finally, ESPN.com’s Chad Ford stopped the madness with a Tweet just a few minutes before the 3 PM ET deadline that the trade wasn’t happening.

The post-mortem from Wojanarski and Ford clearly indicates that the Pacers would have been ecstatic to get this deal done, while the Bobcats, not so much.

It’s unknown exactly what the Bobcats saw in TJ Ford or Brandon Rush, if anything.  But the Pacers (along with several other teams including the Knicks and Celtics, reportedly) certainly see something in DJ Augustin.  Maybe the Bobcats should take their cue, even if it’s just as insurance with Raymond Felton’s free agency coming this summer.

NOTE:  I’ve long included TJ Ford on my “All-Sourpuss Team” of guys who play with a perpetual scowl and just look like they don’t enjoy playing basketball (along with Rashad McCants and Steven Jackson), so I was stunned to find snaps of TJ flashing his pearly whites so easy to come by.