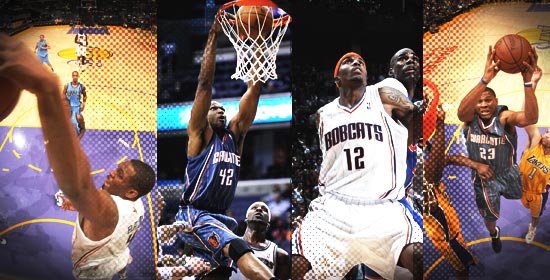 The Reserves Have Made The Difference This Season

The Bobcats are closing in on their most successful season in team history, headed toward a spot in the NBA Playoffs and operating under new majority owner, Michael Jordan. The success is largely due to the leadership of Coach Larry Brown, and a roster upgraded with a collection of talent far above what Bobcats fans were used to seeing during the club’s first 5 seasons. The combination of Larry Brown’s prodding, Michael Jordan’s gambling, and Rod Higgins’ hard work has pulled this squad from unwatchable to a true Playoff team.

Considering all of the new players on the roster this season, Stephen Jackson has clearly made the biggest impact as a newcomer. Dealing Vladimir Radmanovic and (injured) Raja Bell to Golden State for “Jack” was a gamble and a potential public relations risk but the on-court effect was a huge steal for the Bobcats.  Too often, it seems that we hear Charlotte’s success has been due solely to Jackson’s arrival. It could be argued that the depth of talent on the Bobcats’ bench deserves just as much credit for the team’s consistent effort and defensive presence.

Since last summer, Coach Brown, Air Jordan, and Rod Higgins have all been working on tuning the roster. The latest addition of Larry Hughes shows that the team is still tinkering, filling in the gaps in order to secure their first Playoff bid.

Who Has Been The Most Important Reserve For The Bobcats?

While the jury is still out on 2010 lottery pick Gerald Henderson and the recently signed Larry Hughes, we should take a look at the most important “role players” for the Bobcats so far this season.

Why He’s Most Valuable Reserve Material:
Undeniably, Graham’s greatest strength has been his professional approach and consistency while dealing with Coach Brown’s erratic rotation patterns.  Lord Stephen Graham has played very well in spot duty throughout the season ranging from ten minute cameos in relief of Gerald Wallace to 35 minute starts during Crash’s week long absence in March.  Graham played so well in that stretch (notching consecutive 19 point performances) that it’s not difficult to imagine the team bringing the veteran back next season to play a similar role.

Baseline Scouting Report:
Stephen Graham’s physique stands out even among NBA players.  When the season started, I first commented, “While other players spend the offseason working on jump shots and post moves, Stevie Graham worked on his delts.”  The dude is a beast.  Fortunately, this extra weight doesn’t seem to hamper his speed while defending opposing threes.  Graham is a solid if not spectacular defender and shows a surprisingly nice touch on the offensive end when shooting from the outside.  Not a great three point shooter, Graham knows his limits and won’t launch many.  Good for at least a couple of highlight dunks every month, Graham can catch defenders off guard around the baseline for a post & spin move to the hoop.  Graham was billed as a “George Lynch” clone early in the season and that’s exactly what he’s been, a solid NBA frontcourt reserve.

Why He’s Most Valuable Reserve Material:
Although Brown hasn’t been getting much burn during the second half of the season, his early work should (rightfully) raise fans’ expectations going into next season.  The four year forward from Xavier was labeled a 2nd round sleeper on draft day and in spurts Brown has lived up to the billing – his potential was on full display during an 18 point performance against the Suns back in January.

Baseline Scouting Report:
Derrick Brown’s size and athletic ability at his position will keep him in the League for at least a few more seasons.  He’s an excellent open court finisher and a decent mid-range shooter.  At 6’8″, Brown has excellent height for a SF which accounts for a high rebound rate at the position and has also allowed the team to play Brown at PF for stretches before acquiring Tyrus Thomas in February.  With more seasoning, it’s possible that Brown could crack Larry Brown’s rotation for good next year but he’ll need to cut down on the mindless fouls and missed assignments that plagued him during the second half of his rookie campaign.

Why He’s Most Valuable Reserve Material:
Gone but not forgotten, Flip Murray proved to be exactly as billed: a scoring force off the pine, a strong personality with the cajones to take and make shots when others wouldn’t or couldn’t.  Murray’s bench scoring (over 12ppg) provided a major boost during Charlotte’s dominating 12-4 run in January and his presence was immediately missed as the Bobcats went 2-5 following his trade to Chicago.  Eventually, things returned to normal for both Charlotte and Murray as the Cats started winning again while Flip dropped 12.5 in 26 minutes per game with the Bulls in March.

Baseline Scouting Report:
Flip Murray is gonna get his.  Period.  Flip will shoot (and make) half of his team’s shots while he’s in the game and for a team in desperate need of second unit scoring, Murray is a godsend.  What he gives up at the other end of the court on defense he more than makes up for on offense.  During a loss against Orlando back in November, Murray dropped 31 points in 36 minutes – that’s probably more Flip Murray than you really need though.  He’s at his best in a 20-24 minute scoring role while the team’s starters have a rest.

Why He’s Most Valuable Reserve Material:
Bobcats fans were a little disappointed that the team didn’t pursue a veteran backup PF during the offseason.  One by one, quality backups like Drew Gooden and Hakim Warrick were picked up by other clubs and the ‘Cats entered the ’09-’10 season without a legitimate PF to play behind starter Boris Diaw.  While acquiring another big man was inevitable, no one believed that the team would be able to bring in a player like Tyrus Thomas, a 6’10” super-athlete with as much untapped potential as any young power forward in the League.  Still only 23, Thomas stepped in and stepped up his game instantly and is averaging over 10 points, 6.5 boards and over a block in just over 20 minutes a game for the Bobcats since the trade from Chicago.  His presence has allowed the Bobcats to offer different looks, as Coach Brown has played a small frontcourt Thomas, Wallace, and Diaw for stretches against smaller, run & gun squads.
Although the price was steep (giving up a future 1st round pick along with Murray’s bench scoring), Thomas’ potential is worth the gamble.

Baseline Scouting Report:
At 6’10”, it’s a little surprising that Tyrus Thomas has almost no post moves whatsoever.  His offense comes mostly on thunderous putbacks, open court dunks or on unexpectedly sweet 15 footers.  While his rebound and blocked shot rates are off the chart, Thomas isn’t exactly the world’s best defender.  He’ll often be forced to foul or make a spectacular block from behind once his man has beaten him in the post.  Still, Thomas has both age and situation on his side.  Larry Brown mentored a similarly raw specimen in Gerald Wallace to an All-Star selection in just two seasons, it’s not hard to believe that Thomas could walk the same path if he’s willing to work on his game.
BONUS: Having Thomas on the roster will give the Bobcats some flexibility heading into next season.  As long as Tyrus’ contract demands aren’t outrageous, the team will definitely extend him or at least sign him to the qualifying offer for a year, making Thomas an expiring contract or a moveable asset should the team choose to go another direction.

Why He’s Most Valuable Reserve Material:
I don’t want to skew the voting here folks but c’mon, has there been anyone more valuable to the Bobcats late season success than Theo Ratliff?  When Ratliff arrived mid-February from San Antonio (in exchange for very distant 2nd rounder) three of the four Bobcats centers were injured and the fourth was playing hurt (Nazr Mohammed).  The 36 year old veteran showed up as an afterthought, a worst-case scenario insurance policy, and then proceeded to average 6 points, 4 boards and a block and a half in just over 20 minutes of action a night.  The numbers don’t do Ratliff’s impact justice.  Opposing players are aware of his presence on every possession that he’s out there and when the Bobcats trot out Ratliff, Thomas and Crash together on the frontline, there’s a one in three chance that a shot will be blocked.  Simply amazing.  The spry, second coming of Mutumbo has another unexpected trick up his sleeve: he shot 87% from the FT line in March (32-37), making him a little more valuable on offense.  With Tyson Chandler finally healthy and playing well and Nazr Mohammed coming back soon, Coach Brown will have to reconfigure his rotation at center and that might mean reduced minutes for Theo.  Doesn’t matter, Ratliff’s play in March propelled the Bobcats to an 11-6 record for the month, all but sealing the team’s first Playoff berth.

Baseline Scouting Report:
Theo Ratliff is never going to win any battles down low with brute strength.  He’s more of shot blocker, shot alterer and does this with ease.  Technically, he’s a solid defender who can hold his own against the League’s top centers (see the March victory against the Magic in Orlando).  On offense, Theo should be barred from ever touching the ball more than six feet outside of the basket.  In fact, the semi-dashed circle underneath the basket that the officials use to determine blocking fouls versus charges should also be used by Theo Ratliff in determining whether or not he should take the shot.  Look down, if he’s outside the circle, pass.  In, dunk or get fouled and go to the line.  Simple as that.

Vote For The Role Player You Think Has Most Helped The Bobcats This Season.

4 thoughts on “Which Bobcats Reserve Has Been Most Crucial?”