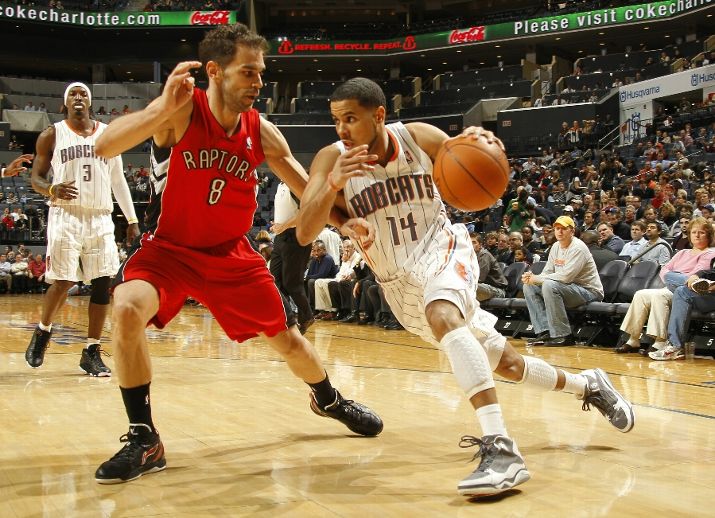 The Bobcats handily defeated the Toronto Raptors, 114-101, on Tuesday night at the Cable Box.  DJ Augustin led the way with 23 points and 8 assists/o turnovers, while Gerald Wallace relentlessly drove at Toronto’s weak interior defenders en route to 14-15 FTs and 20 points.

The Bobcats took the lead late in the first quarter and never looked back.  They stretched the lead out to double digits in the second and nearly out to 20 briefly in the third.  A meaningless Raptors rally cut the Cats lead to 11 midway through the fourth before Gerald Wallace closed the door for good by getting to the line for 5-6 free throws on three consecutive possessions.

The Raptors are pretty much a mess, and it starts with their best player.  7’0″ center Andrea Bargnani is about as soft as they come, and his nonexistent defensive ability and effort set the tone for the rest of the young team.

Thoughts at the Trade Deadline

Bonus trade deadline thoughts!  Now that the Carmelo deal is done, some other smaller deals are starting to go down.  The deadline is at 3 PM ET on Thursday.  Several sources have indicated that the Bobcats have been active on the phones.

But Paul Silas has been quoted both Monday and Tuesday as saying that he doesn’t think the Bobcats will be making a trade; his quote from Tuesday made it sound as if the Bobcats had only received ludicrous proposals from other teams: “We’re not just going to give people away and that’s what most teams want you to do.”

That’s basically code for: “You know who we’ve got on the block.  We’re ready to deal, but you’re going to have to step your offer up.”

And while I agree that the Bobcats should only trade Gerald Wallace if they get a Godfather offer, and should be pretty picky about giving Boris Diaw up, I wouldn’t be as choosy about a Stephen Jackson trade.  I’d jump on a mix of an expiring contract and a draft pick in a heartbeat, but that’s probably not happening.

Whatever the case, despite Silas’s proclamation that “nothing’s happening”, expect to hear the Bobcats continue to come up in deadline buzz over the next day and half.

POLL : What should the Bobcats do at the trade deadline?