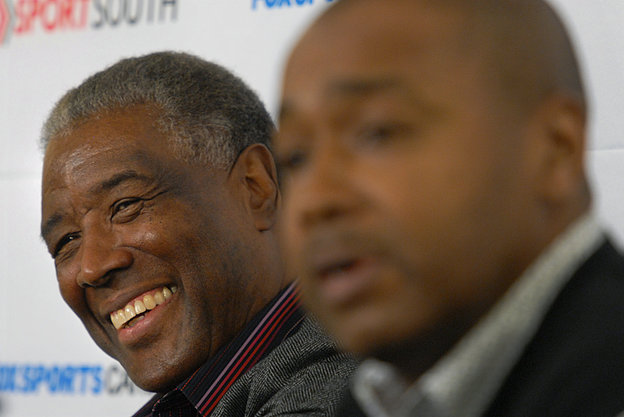 The Bobcats announced Wednesday that they’ve removed the “interim” tag from coach Paul Silas and extended his contract through the 2011-12 season.  Terms of the deal have not been disclosed. From Mike Cranston:

The 67-year-old Silas brought a calming influence and a more uptempo, free-flowing style. He’s led the Bobcats to a 15-13 mark to get within 1 1/2 games of the Indiana Pacers for the final playoff spot in the Eastern Conference.

Silas believes the Bobcats have a “very good shot” at making the postseason for the second straight season.

“My main goal when I took this job was to change the atmosphere, change the attitude and make the team more confident,” Silas said. “I think we’ve begun to accomplish those goals.”

In a story posted by Cranston on Tuesday as news broke that the Bobcats and Silas were talking extension, Silas reveals that he had dealt with some scary medical issues in recent years:

The 6-foot-7 Silas, a bruising and elite rebounder who played 16 seasons in the NBA, first fell ill after a colonoscopy in 2008. He said doctors performed exploratory surgery to determine why he was feeling poorly, which led to blood clots in his lungs.

The clots then moved to the quadriceps muscle in his left leg.

“I would walk down steps and I would just fall down,” Silas said. “It was touch and go.”

Things got worse and Silas was hospitalized on Christmas Eve 2008 and sedated as doctors tried to solve his medical problems.

“I was in intensive care for about six weeks,” Silas said. “I was out. It was scary for my family. I don’t remember anything during that six-week period.”

Eventually blood thinners eliminated the blood clots and Silas slowly got back to his feet after later problems with his liver. After gaining a lot of weight in part due to the medication, he’s lost 50 pounds and feeling better daily. Doctors later determined the cause of his initial illness was being allergic to anesthesia.

Silas said it wasn’t until about a year ago that he felt good enough to coach.

Kind of a bizarre story, and explains why Silas was out of coaching those years.  Also helps to explain why the Bobcats were careful with initially putting the “interim” tag on Silas.  Clearly, the newly svelte Silas has been able to hold up amidst the travel and daily grind of coaching in the NBA.

Overall, it’s hard to question this move.  The Cats have clearly responded to Silas; he is well-regarded amongst the fanbase; his health appears in order; and (speculation alert) he likely comes at a very reasonable price — not an unimportant concern for the Bobcats.

Not extending him might have undermined the team’s tenuous recent improvement and confidence.  So does this mean the Bobcats are committed to this squad making a playoff run instead of blowing it up at the trade deadline?

It’s a reasonable inference, especially with the absence of trade chatter around the league and the seeming lack of buyers for contracts like Stephen Jackson’s, but not necessarily.  Silas has had a more dramatic effect on the younger players like DJ Augustin, Shaun Livingston and Gerald Henderson who would be part of a new core anyways.  I still wouldn’t rule out a Stephen Jackson, Gerald Wallace, Boris Diaw or Nazr Mohammed trade next week if a great deal comes along.

“He’s at a point now where he could take over,” Silas said. “He’s helped me immensely. He’s been in this thing for 10 years now. His time is coming. He’ll just have to wait it out… I told him I’d be his assistant behind the bench.”

I’m wary of nepotism, but in certain businesses where the pool of candidates who can get their foot in the door is so limited, it’s unavoidable.  The younger Silas seems to be a good new-school foil for his father at this point.  He’s more of an Xs and Os guy, and is generally the one diagramming plays and schemes during timeouts.  If he’s also got his father’s gift for people skills, he could be an excellent candidate for a head-coaching job in the near future.