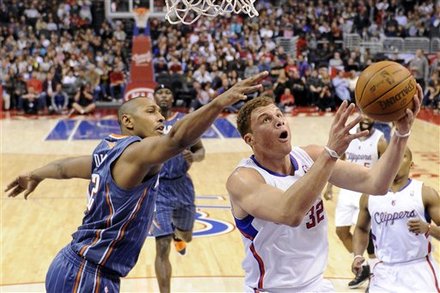 Believe it or not, this defense did not stop Blake Griffin. (AP Photo)

It was a rough game tonight, from the beginning to the final buzzer.

And though that didn’t have any impact on the game, it should have warned me that I was in for a bumpy Bobcats game that would end with them losing 103-88, ending the Bobcats’ three-game road win streak.

The real damage was done by Blake Griffin tonight, as everyone should have known. Coming into the game, I was a little worried that the Bobcats didn’t have a power forward as strong or athletic to defend Griffin.

And that’s exactly what happened.

Blake Griffin led the Clippers in the first half with an array of highlights, including an eye-popping 360 degree, reverse layup en route to 19 first-half points. The tired Bobcats simply couldn’t keep up and fell behind to a huge deficit in the third quarter. Then, like the young team they are, the Clippers let the Bobcats make a comeback effort, led by the bench. However, after the lead reached 11 points, L.A. regained their focus and beat the weary road opponents (JUST AS I PREDICTED).

Boris Diaw and whoever else tried to defend Griffin just could not control him. Whether it was Griffin’s strong post moves, his quickness, or his amazing leaping ability and fervor for getting rebounds, no Bobcats player could defend him at all. In fact, most of his mistakes were unforced, including a huge missed dunk. He would end the night with 24 points and 10 rebounds on 11-23 shooting. Admittedly, it’s not the most efficient stat line, but his presence was felt on every play. The Bobcats began to double-team him – in the second quarter. He was that good. And the only player who had a good shot at defending him was injured (Tyrus Thomas).

But I can’t just put all of the loss on Griffin’s night. The Bobcats were on the tail end of a back-to-back with this being their fourth game in a six-game road trip. The Clippers, on the other hand, last played on Wednesday. The effect was enormous. Charlotte came out at a decent clip, but faded fast, unable to keep up with the Clippers’ pace and energy. It wasn’t until the fourth quarter, when Silas let loose the bench players, that the Bobcats regained any type of offensive scoring.

The Bobcats starters were simply atrocious, except for Stephen Jackson, who seems to have emerged from his January slump. Jackson went for 15 points on 5-11 shooting from the field, but the rest of the starters combined for 9-30 FG and 29 points. The fatigue was obviously overwhelming, considering the Bobcats had just finished an overtime thriller the previous night. Many shots were short and the Bobcats were lazy with their passing. D.J. Augustin, who has been outstanding as of recently, finished with four assists and three turnovers. As a team, the Bobcats had 17 turnovers.

The bench played admirably, reeling in a 25-point deficit to 11 with 7:37 to go in the fourth, but L.A. regained their focus and squished the Bobcats like an annoying mosquito. Gerald Henderson continued to show his talent, pouring in 14 points on only six field goal attempts. Shaun Livingston just had an awful night, hitting no shots from the field and turning the ball over three times. However, he did get to the line for six free throws, all of which he made. Derrick Brown had five points and five rebounds and Matt Carroll scored eight points all in garbage time. Nazr Mohammed was also effective off the bench with five points and 5 rebounds.

The Bobcats continue on their six-game road trip on Monday against the Utah Jazz.

By the way, get your tickets for the Clippers when they come to Charlotte now. 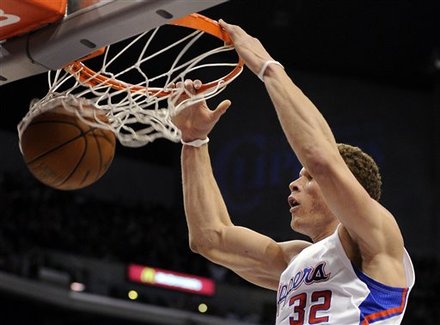 DO NOT MISS OUT ON THIS, TRUST ME. (AP Photo)