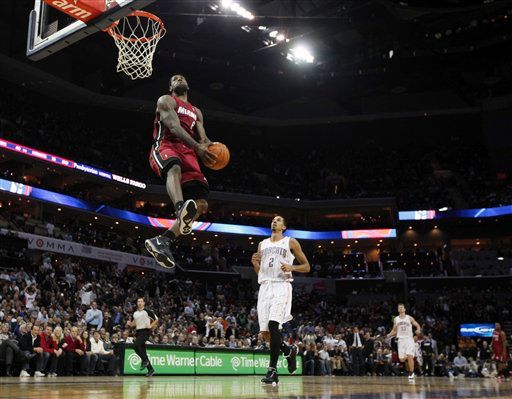 The Miami Heat’s duo of LeBron James and Dwyane Wade were way more than the shorthanded Charlotte Bobcats could handle on Monday night at the Cable Box; the Heat posted a 96-82 victory behind 38 from LeBron and 31 from Wade.

To recap the Bobcats injury report, Gerald Wallace re-aggravated his left ankle injury at practice at Sunday and will miss a couple games.  Gana Diop is done for the season after tearing his Achilles tendon against Golden State on Friday.  And Nazr Mohammed had to sit out tonight’s game after developing soreness in his right knee after a collision in the Golden State game.

So despite having to start Kwame Brown and Gerald Henderson, the Bobcats came out aggressive and played a superb first quarter.  Henderson and Stephen Jackson were hitting early while Heat looked to be going through the motions.  Problem is, a superb first quarter for the Bobcats is 28 points; going through the motions for a quarter for the Heat is still worth 23 points.

Towards the end of the second quarter the Heat grabbed control and took a 47-43 lead into halftime.  The Bobcats looked flat coming out in the third quarter — and then LeBron went off.  Wade had done much of the damage for the Heat in the first half, but LeBron just owned the third quarter.

With Stephen Jackson trying to guard him, and the crowd electric with a mix of spite and growing awe, LeBron handed out 2 assists, grabbed 5 rebounds, and tallied 17 points (on 6-8 FG, 1-3 3PT, and 4-4 FT).  Lebron personally outscored the Bobcats for the quarter (17-16) and pushed the Heat lead out to 78-59 heading into the fourth.

The Bobcats made a small run to start the fourth, cutting the Heat lead briefly to 80-69, but LeBron ended that with his next two plays.  First, he hit a crazy 37-foot three with the shot clock winding down — pretty much with his normal shooting form.  Next trip down the court he intercepted a Bobcat pass and went in for his patented breakaway reverse jam (see above photo).  That pretty much did it.

Despite the 14 point loss, this was easily the most fun Bobcats game I’ve been to this year.  Without Gerald Wallace, and down to Kwame Brown as their only true big, the Cats didn’t have much of a chance.  But they came out and threw some big punches early in the game, landing enough to force LeBron and Wade to take them seriously.  The close-to-sellout crowd was vociferously anti-Lebron/Wade.

And as little as I think of LeBron’s decision to join forces with Wade, I have to hand it to them for accepting their villain status.  Now other LeBron’s pregame chalk toss, neither he nor Wade will ever do anything overtly dastardly on the court — anything too gratuitous and you can’t sell sneakers, see — but they might as well.  Everything about their body language and play, even down to their running trash talk with courtside fans tonight, reminds me of professional wrestling’s “cool heels” — like The Rock or Ric Flair (who was conveniently courtside tonight, by the way).

The more lathered up the crowd gets, the better they perform.  And they perform so damn well that the boos eventually have to give way to “did you see that” gasps and begrudging respect for their talent.  It’s the perfect angle for them; I’m glad they’re playing the part.  They put on a good show tonight and I’m already looking forward to the rematch next month.

As for the Bobcats, I know I’m beating a horse I already killed here, but with Gerald Wallace having re-aggravated his bad ankle and the frontcourt so thin, this would be a perfect time to dismantle and start to rebuild.  Announce that Gerald Wallace needs 4-6 weeks to let that bone bruise heal — that takes him through the All-Star break.  Meanwhile, find a taker for Stephen Jackson (getting back cap relief and draft picks) and let Silas do his thing with the rest of the roster.  If only…