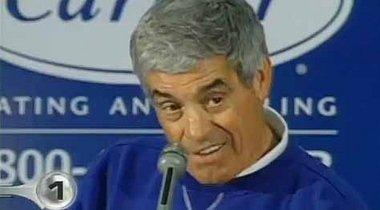 Today I received an email from the Bobcats.  You see, even though I’m a season ticket holder who’s already re-upped for next season, I haven’t committed to playoff tickets this year — today is the deadline.  It’s easy enough: since I have re-upped for next season, I have the option to “Pay as We Play”, meaning that I’d only be charged after each round (ha! more than one round?) the Cats played in the playoffs.  It would just take a quick phone call to opt in on that plan — why not, right?  But I’ll pass.

I’m hardly risking anything.  But it’s also my quiet (and yes, petty and pointless) protest against the very idea of the Bobcats being in the playoffs this year.  It’s the principle of the matter.

First, the facts.  As of Monday night the Bobcats are tied with the Bucks in ninth place, a full two games behind the 8th place Indiana Pacers, with 13 games left.  Though the Cats have head-to-head matchups remaining with both the Pacers and Bucks, they’ve already blown the season series/tiebreakers with both of those teams.  Other remaining games include Boston and Miami on the road, the Knicks at home, and two matchups with the Magic.

As I post this, ESPN’s John Hollinger’s playoff odds system gives the Bobcats a 16% chance of finishing the season in the 8th spot.  Basketball-Reference.com isn’t even as kind, putting the Cats chances at a meager 9.2%.

Furthermore, the notion that the Bobcats should even be gunning for the 8th playoff spot is ridiculous.  Another sweep, this time by Boston or Chicago? No thanks.

Making the playoffs would also lock the Bobcats into the #15 pick in this year’s draft, while missing out will probably put us at the 9th spot with its small associated chance of moving up to one of the top three picks.  While there doesn’t appear to be any savior in this year’s draft pool, the difference between picking at #9 and #15 is nonetheless important.

So don’t fret about Stephen Jackson’s hamstring and don’t pay much mind to anyone saying how “big” Wednesday’s matchup with the Pacers is.  The Bobcats have no business making the playoffs this year, and won’t.  They probably wouldn’t even if Jack was totally healthy.  With him hurting, it makes more sense to me to shut him down for the season and embark on a full-on tankfest — the 8th pick isn’t out of reach.

13 thoughts on “The Bobcats and the Playoffs”