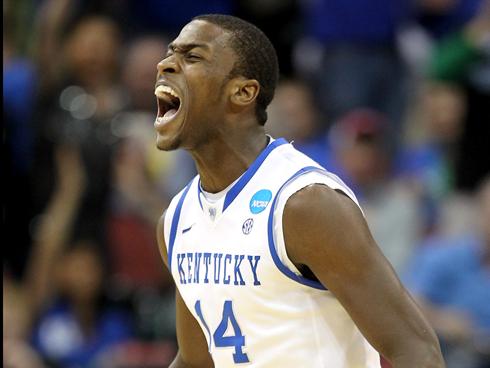 “You don’t understand, Michael Kidd-Gilchrist is a winner!” – People on the Internet

Great! But why stop with MKG? Maybe the Bobcats should draft Michael Phelps or Tom Brady. What’s Ivan Lendl up to these days? Meryl Streep? She’s as decorated as they come. If I’ve learned one thing in my twenty-plus years of ring-less fandom, it is that THERE IS NO CORRELATION BETWEEN preprofessional and post-professional success. Period.

Strange that the Bobcats have had all of these winners in their brief existence yet have lost so many games. Quick look at the stars currently playing for a title: Lebron, DWade, Pierce, Garnett, Rondo, Harden, Durant, Westbrook, Duncan, Ginobli, Parker. ZERO NCAA Championships total. Conclusion: IT DOESN’T EFFING MATTER.

“MKG has a motor that doesn’t stop!!!” – People on the Internet

So does a Honda Civic but you won’t see it on the track at Le Mans. Reggie Evans, Kenneth Faried, Cory Brewer, Matt Barnes and Tony Allen all give 110% every minute but if I was coming off the worst season in NBA history, I’m not sure I’d spend the Number Two Overall Pick on a non-game changing Energy Guy.

Oh yeah, and then there’s that thing about how Kidd-Gilchrist CAN’T SHOOT. Or create offense for himself. That’s gonna go over real well on a team already LOADED with offensive threats, right?

If Bobcats GM Rich Cho is 15% as smart as the internet gives him credit for, he ain’t gonna take MKG anyway so I don’t even know why we’re talking about him. If the team KEEPS the pick, they’ll almost certainly choose between the following three players (in no particular order):

PROS: The Safe Pick. He’ll probably never beat Chris Bosh or Al Horford out of a starting All-Star gig but he’ll slide in nicely next to Biyombo to eventually form one of the East’s better, if undersized, frontcourts. His rebounding will be an instant godsend as will his ability to successfully execute any sort of offense within four feet of the basket.

CONS: Power Forward is hands down the easiest position in the NBA to fill right now. Aside from the top 5-6 guys, there’s not much separating the Carlos Boozers from the Drew Goodens. Not to mention the fact that Tyrus Thomas’s off year on the runway model diet may prove to be a fluke. Add to that the availability either via Free Agency or Trade of some solid starters (Paul Milsap, Ersan Illyasova, Brandon Wright, Josh Smith, Carl Landry) and it might not make sense to spend Number Two on a Glorified Replacement Player.

POTENTIAL TOP FIVE AT POSITION? No.

PROS: The Vegas Pick. There just aren’t many dudes with Drummond’s combination of size and athleticism. He’s almost as HUGE as Bynum and Howard today at nineteen. His offense needs work and he’ll surely be a foul magnet and therefore a non-factor early in his career but if both parties invest heavily in his development, he may one day challenge Anthony Davis as the best big man in the 2012 Draft class. Pair him with Biyombo and they could form the most fearsome defensive frontcourt in the league for a decade.

CONS: Kwame 2, Electric Boogaloo. If he’s not serious about the game or his career he could single-handily set the franchise back at least another year. But for a team already playing from so far behind, that might not matter.

PROS: The Cam Newton Pick. Lost in the now universal worship of Cam is the fact that most draft analysts initially had him pegged somewhere between a mid-first rounder to an early second round pick. Panthers GM Marty Hurney rightfully shut out the experts and picked the guy who was right for the team and situation, regardless of draft position. It paid off big.

Beal is this draft’s Newton. He does precisely the things the Bobcats desperately need: SHOOTING + DYNAMIC SCORING. Put him in a three guard rotation with Gerald Henderson and Kemba Walker and the Bobcats backcourt is a big point guard away from being good for a long while.

CONS: “But Gerald Henderson is our best player!!!” -People on the Internet – Do I even have to acknowledge this? I like Henderson. He’s fine but he’s probably the 19th best shooting guard in the league. Plus Beal can play some point. Like a rich man’s Sefolosha in OKC, there will be plenty of minutes available for Gerald, Jr.
“You can’t draft an undersized SG at number two!” – Traditional Draft Experts – It’s a small-ball league now and has been for some time. Beal’s shooting and ability to get to the line will help the team in their dire most area of need. Instantly. If Rich Cho is 4% as smart as I think he is, look for Beal to be swishing threes next season in orange and blue.

COMING SOON: OFFSEASON PLANS BASED ON THE POTENTIAL PICKS