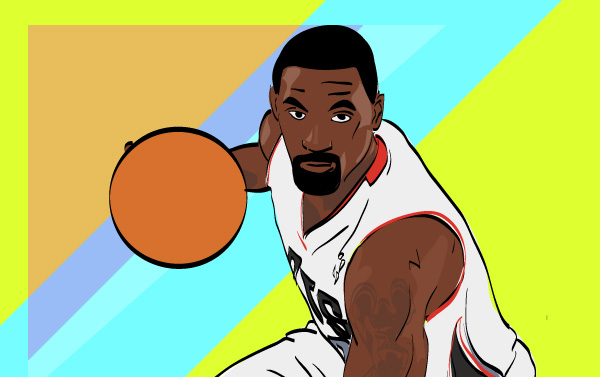 Believe it or not, there was a time not so long ago in which Ben Gordon was viewed as a legit NBA asset. In fact, we can pin-point the time exactly: July of 2009. That was when Joe Dumars and the Pistons signed “Air” Gordon to his now infamous five year, $58 million contract. Ben had just turned 26 that summer and was on the heels of an amazing five year run with the Bulls in which he:

So what the heck happened to that guy?

Ben’s three years in Detroit were the franchise’s worst stretch in decades, largely due to Dumars’ crazy post-Championship roster rebuild. There were no leaders on those Pistons teams, just a bunch of moderately skilled guys who were sick of losing and unable to do anything anything about it. As a high profile free agent signing, Gordon was miscast as a go-to guy on a go-nowhere team. His minutes dropped, he got hurt (28 missed games in just three seasons) and the one thing he was special at, ridiculous scoring, went away. Detroit was paying Ben over $10 million a year to average twelve points per game. Dumars finally folded on the experiment last summer, bribing Charlotte with a potential Lottery pick just to take Gordon off their hands.

So that brings us to the ’13-’14 season, the final year of Dumars’ Folly. Ben’s $13.2m salary will disappear from the books regardless of how things play out, so the question is: How Will It Play Out?

SCENARIO ONE: Goodbye and Good luck.

This, unfortunately, is the most likely scenario. Gordon makes trouble for yet another first year coach (Steve Clifford), gets relegated to the doghouse for most of the season – only to occasionally show up with a big (yet meaningless) game. The paperwork renouncing Ben’s rights arrives at the league office on a balmy early July morning and Rich Cho & Rod Higgins use the space to make a run at another big-name free agent.

Ben latches on with a random team for the veteran’s minimum and is out of the league a year or two later.

There are precisely two types of trades Gordon could be involved in this season and they are:

I went through every team in the league and could only think of three legitimate trade scenarios that could happen this year – two Type 1s and a single Type 2.

Charlotte sends Gordon and Brendan Haywood to Chicago for Carlos Boozer and the return of their own first round pick.

We’ve kicked this one around at the Baseline before and if it’s ever going to happen, it’ll happen at this year’s deadline. Chicago is a big-time contender and will certainly improve offensively with MVP Derrick Rose back in the fold. But the Bulls’ second unit is relying dangerously upon the scoring prowess of Mike Dunleavy and Kirk Hinrich to keep them in games and Gordon once dominated in this very role. Meanwhile, Boozer gives the Bobcats a one and a half year rental of a solid, two-way starting PF – allowing the team to bring Cody Zeller along at a measured pace.

It’s a tough trade for both teams as Boozer’s $16.8m salary next season essentially removes Charlotte from the free agency game. But if they truly value draft picks above all else, the deal assures the front office of never having to part ways with a first rounder. Also the trade has a nice karmic rebalancing quality: Gordon reminds Chi-city of the Nate Robinson before there was “Nate Robinson”, Boozer returns to his Carolina collegiate roots and the first round pick coming back officially nulls & voids the Tyrus Thomas trade.

Speaking of karmic rebalancing, this trades ships Haywood and Okafor back to their old stomping grounds and involves two UCONN Huskies that went back to back in the ’04 Draft (Emeka went 2nd, Ben went 3rd). From a hoops perspective, Gordon allows Washington to spread the floor with shooters when Bradley Beal is on the bench (or in street clothes) while Okafor gives Charlotte a reliable backup center for a few months – but most importantly serves as a neat bookend for the “Bobcats” era – from Okafor in ’04 to No-kafor in ’14.

Let’s say the Thunder continue their trend of long term cap-flexibility over short-term gain. Let’s say that Jeremy Lamb doesn’t blossom into a bench scorer this season. Let’s say that the team looks at their roster and realizes that they need more offense from their bigs in order to take the next step.

Taylor gives OKC Thabo level production at a fraction of the cost over the next few seasons. Zeller/Stephen Adams becomes the Thunder’s frontcourt of the future, with Nick Collison/Kendrick Perkins stewarding the present. Next July, OKC could finally amnesty Perkins’ salary and, combined with Gordon’s expiring, would free up double digit millions in cap space for the Thunder for the first time in a long while.

The Bobcats in turn get perhaps the PERFECT frontcourt partner for Al Jefferson. A rim-protecting, floor stretching PF who can make up for all of Big Al’s shortcomings on defense and punish Jefferson double teams at the other end on the perimeter. The new Charlotte Hornets suddenly morph into “MEMPHIS EAST” with Al as Zach Randolph, Kemba as Mike Conley, MKG as Tony Allen with upside, Ibaka as Gasol and Henderson as a better Tayshaun. How far does a core like this take you? A hell of a lot farther than the Bobcats have ever been before.

In this scenario, Ben uses the motivation of the contract year and the respect of his new coach to regain the old mojo. Gordon flashes back to the 19ppg bench scorer of old, keeping the Bobcats in the Playoff hunt all season and staying in the conversation for Sixth Man of the Year. Charlotte even thinks about bringing him back on a more reasonable deal. Impossible you say? Before you scoff, remember that Ben Gordon has a made a career of humbling people…

One thought on “Ben Gordon: Trade Scenarios and Expectations”