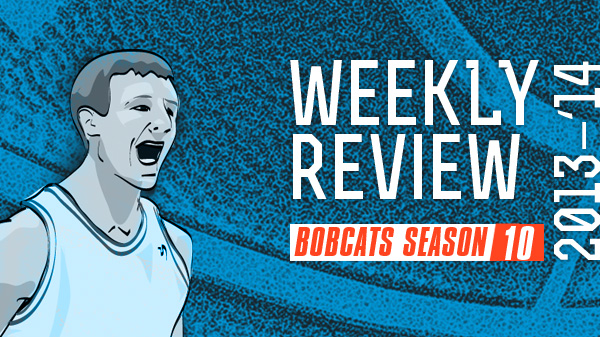 NOTE: The week in review posts will now be published on Sundays.

Charlotte goes 2-3 over the past ten days, a frustrating stretch that saw the team:

Fork in the Road

We’ve hit mid-December and the Bobcats stand at 10-14, having just dropped two winnable home games against sub-500 competition. They’re on pace for 33 wins, which, given the current state of the Conference, should have them out of the Playoffs and picking somewhere in the 12-14 range. The Bulls would then get the pick and Charlotte’s worst case scenario would be complete. No Playoffs, no picks. Clearly, the status quo is not an option. The Bobcats front office needs to make a decision soon: Make a Run or Tank a Ton.

If they decide to go for it, the remaining schedule won’t do them any favors. The team has already played four more home games than road dates and have two long west coast trips yet to go. According to ESPN’s relative percent index, the Cats have had the tenth easiest schedule in the league thus far.

Losing Al Jefferson and Michael Kidd-Gilchrist for stretches has certainly been a challenge but a good team should have been able to ride the favorable schedule closer to five hundred. The makeup of the roster is much improved from last season but is still unbalanced. No one on the team can make a consistent jump shot and the dropoff in overall wing play goes downhill fast after Jeff Taylor. The Bobcats rely on Josh McRoberts to be more than the third big man he is and outside of Kemba Walker, there is nobody on the roster who should touch the ball in crunch time.

If the Cats can just correct one or two of these flaws during the season, they could still make the Playoffs and I’m guessing that Rich Cho and Rod Higgins are mining for offers that makes the team better now without hurting them later. But that kind of deal may never arrive – the braintrust will be forced to decide between punting yet another season or sacrificing some future potential for today.

Being patient in an elite Draft year is a sound strategy. If Jabari Parker, Andrew Wiggins, Julius Randle or Dante Exum suit up in a Hornets jersey next season, fans will surely be quick to forgive this season’s lost opportunity. Still, there’s something sad and ironic about a franchise that’s failed to draft a single All-Star in a decade pinning it’s hopes on yet another Lottery.

Speaking of mid-season trades, according Grantland’s Zach Lowe, Houston recently offered disgruntled center Omer Asik to the Bobcats in exchange for two first round picks and the rights to swap a third. Charlotte wisely turned them down. While Asik’s defensive presence is underappreciated by the casual fan, the Rockets are asking for more than they gave up to OKC in the James Harden trade for a non-All Star who is entering the last year of his contract. Is Morey is under the impression that Rod Higgins and Larry Brown are still calling the shots in Charlotte?

Should the price return to earth, the Bobcats could be an interesting suitor. Asik played extremely well as a backup center under fellow Van Gundy-alum Tom Thibadeau in Chicago. Omer’s offense improved as a starter with Houston last season and his salary ($15m due with only $8m counting against cap) is reasonable enough for a starting, above-average center.

Of course, the Cats already invested heavily at Asik’s position just a few months ago when they signed Al Jefferson to a three year $45m deal. And before you ask, no, they cannot play those two together for any reasonable stretch of time. The thought of Jefferson having to cover stretch fours would likely send Steve Clifford right back to the hospital. Charlotte would have to find another home for Jefferson, who can only be traded after December 15, and I have absolutely no idea what the market is for Jefferson at $15m per.

Also, we can’t dismiss Asik’s actual, non-cap salary next season of $15m. Remember that Michael Jordan is still on the hook for Tyrus Thomas’ $9m for both this season and next. The Bobcats are hardly a cash cow business for MJ and swallowing the additional $16m in off the cap player salaries (not to mention the re-brand costs) may be outside the financial scope of what this ownership group can feasibly do.

You sir, are no Bust

Allow me to use a portion of this week’s column to diffuse an early season myth in the making. As someone who’s followed the Bobcats closely for all ten seasons (yeah, I’ll never get that time back), I’ve been subjected to all sorts of Draft “busts”: The questionable work ethic type (Sean May), the athletically challenged type (Adam Morrison), the skill deprived type (Alexis Ajinca), the physically over-matched type (D.J. Augustin), etc, etc. As a self-certified expert in modern NBA draft blunders, I am here to tell you that Cody Zeller – regardless of his early struggles – is not one of them.

Zeller, armed with a sound hoops IQ, elite athletic ability, legit seven foot size and a Tom Crean-infused work ethic, dodges all of the major pitfalls associated with past Bobcat busts. His uncorrectable shortcoming (wingspan) can be overcome as Cody improves his perimeter game (his twenty footer already looks better). Zeller’s lack of lower body strength will arrive over the next few seasons as he begins his “mans-formation”, using the next couple of summers to bulk up. And don’t forget that Zeller is learning a new position during his rookie year – which is sort of like studying for the MCAT in a foreign language. Cody has the chops to be a very good pro, just be patient with him.