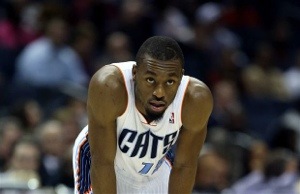 January 19th, 2013. It was Saturday evening in Austin, Texas. Though there were plenty of interesting things to do in and around the nation’s live music capitol, my brother and I decided to dedicate our night to watching a crappy Bobcats team take on a slightly less crappy Sacramento Kings team via League Pass. Questionable lifestyle decisions aside, we were at least prepared: half a pint of Stoly in the freezer for me, a couple of hipster approved craft brews for my bro. At somepoint in the 3rd quarter, fueled by booze and Mike Dunlap’s putrid offense, the following question was asked:

“What roles would these Bobcats play on a good team?”

Ultimately, the answer to this question both illustrates the true state of the roster and explains why the team has struggled to a 10-30 record. Let’s begin with the positives.

Players in their Proper Roles

Kemba Walker. Playoff Role: STARTER.
The only guy on the Bobcats roster worth watching for 82 games, Kemba has improved tremendously since last season, notably in the passing game and with his shooting percentage (from 36% to 43%, 46% TSP to 54% TSP). Because he’s not in the Chris Paul-mold some feel that Kemba’s ceiling is limited as an NBA point. I would point out that CP3 built a career tossing alley-oops to Tyson Chandler, David West, DeAndre Jordan and Blake Griffin. Meanwhile Walker’s been saddled with Bismack Biyombo and hodgepodge of sub-standard offensive bigs. Let’s reserve judgement on Kemba’s playmaking abilities for now. In the meantime, as a tough, scoring lead guard, Kemba is simply awesome to watch.

Brendan Haywood. Playoff Role: BACKUP CENTER.
This is cheating a little since Haywood’s previous gig was as the Backup Center on a Playoff team in Dallas (though Ian Mahimni stole his minutes when it mattered), nonetheless, Brendan’s decent-at-everything approach and low price tag more than qualify him for the role of Playoff team backup center.

Ramon Sessions. Playoff Role: BACKUP POINT GUARD.
The Bobcats may not be a Playoff team but they do have postseason depth at the game’s most important position. Session’s size and play style has proved a nice complement to Walker. Although he’ll never make an All-Defensive team (opposing points have posted a scorching 19.5 PER against him), it’s not for a lack of effort. Surround Sessions with some quality teammates and he’s a solid Playoff third guard.

Gerald Henderson. Playoff Role: ???
Henderson’s had a strange season since returning from November’s ankle injury. His career high near fifty percent mark from beyond the arc has been a pleasant surprise (granted he’s only averaging a single attempt per contest) and his mid-range game looks as solid as ever. The problem is that defensively, GH2 has taken a major step back. In his previous two seasons, Gerald’s opponents were managing a paltry 14.0 PER against, establishing Hendo’s reputation as a near lockdown defender in the making. Unfortunately, this season opposing SGs are toasting him: a 20.6 PER against more than negates the positive strides GH2’s made offensively. This is likely an abberation due to Gerald’s foot and back injuries and to the complexities (I’m being nice) of Dunlap’s zone-based defense. Regardless, Henderson is currently not a starter on a Playoff team and given his preference for that gig, I’m not certain what role he would play.

Ben Gordon. Playoff Role: SIXTH MAN.
There are times in which Ben Gordon is the best player on either bench. His gorgeous, high-arching jumper seems to have been gifted to us from the basketball gods. Rising, falling, fading away, every shot born at his fingertips, dying on twine. We knew there would be moments like these (the November near-win in New Orleans is still my favorite) but we also knew there was a reason Detroit gave up a potential lottery pick just to take him off their hands. As an aggregate, Gordon has been consistently solid on offense (24 points/40 on 45% shooting) – a positive but not exactly the type of production you’d want out of a $12 million per year, one-way guy. The advanced stats have him as a net neutral (-0.3) at SG but the eye-test proves that Gordon’s still a major liability on defense (Tyreke Evans abused him for the go-ahead basket last night in one of Dunlap’s most eggregious substition brain-farts of the year). Ideally, Gordon would be the Sixth Man on a strong defensive team with big PGs to pair him with. Returning to Chicago seems the most obvious fit but Ben’s contract may prohibit such a move for the next couple of seasons.

Michael Kidd-Gilchrist. Playoff Role: ROTATION WING.
I’ll keep this short. Remember how slowly Utah developed its 19 year old physical specimen? Well, MKG is the wing-version of Derrick Favors. He should be playing 20 minutes or less a night behind an established, quality veteran and starting in another two or three seasons. At which time, he’ll own the position for a decade. His current mis-assignment as a starter isn’t helping anyone, especially his rep with the fans.

Bismack Biyombo. Playoff Role: RESERVE.
Speaking of having your reputation damaged, perhaps no other Bobcat has taken more internet heat this year than the lovable, mistake-magnet from the Congo. In Biz’s defense, he shouldn’t be starting for any team, Playoff or otherwise. Given the fact that he’s only been playing the game for four years, I’d say he’s made an excellent amount of progress. The problem of course is that he’s simply not NBA ready. He’s a moderately decent defensive center (16.2 PER against) and an atrocious offensive liability. It’s getting to the point where his development is taking a hit due to all that his bad team asks from him. Cho and Dunlap need to huddle and figure out a way to reconcile this before burning him out like a not-ready-for-primetime young quarterback.

Tyrus Thomas. Playoff Role: OPPOSING TEAM’S ROSTER.
A Playoff team would love nothing more than to face off against a lineup that featured Tyrus Thomas, the league’s first player to make a successful comeback following a lobotomy.

Byron Mullens. Playoff Role: BIG MAN ROTATION.
As much as it pains me to admit this, there is a very real chance that Byron Mullens could one day play meaningful minutes on a Playoff team. Certainly not as a starter but as a third or fourth change-of-pace big, sure. Before going down with a gruesome ankle injury last month, Mullens proved that he could rebound at a decent clip (7.8 rpg, 14 r/40) and could occasionally hit an open three. He’ll need to improve his shooting percentages tremendously (37% FG, 30% 3PT) and maintain the growth on defense but given his size and potential offensive abilities, it’s not out of the question Mullens could eventually play the role of a below-the-poverty-line man’s Dirk on a Playoff roster.