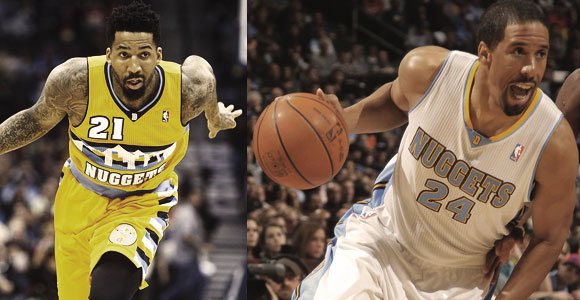 I just couldn’t help myself. After last night’s statement win in Detroit, the 2014 NBA PLAYOFF-bound Charlotte Bobcats got the fake trade juices flowing! So here’s a little last minute scenario as we approach the Deadline’s final 24 hours.

The Allow Us to Help You Tank and ReGroup Scenario

Denver is squarely out of the Western Conference Playoff picture and owes the least favorable of its own or the Knicks’ first rounder to the Magic in June’s Draft. As of today, they’d be conveying their own pick (13th) to Orlando and they’d wind up taking New York’s 1st in the Bottom ten.

With the widespread consensus being that this is a ten player Draft, problems arise for Denver if the Knicks push their way into the Eastern Playoffs (always a possiblity). The Nuggs would then send a mid-round pick to the Magic and keep their own late Lotto selection. Enter the Charlotte Bobcats.

Denver not only makes their team worse this year (insuring a higher pick in case of a Knicks Playoff run), they double down on the bet by empowering a New York eight seed rival AND shave nearly $15 million off next season’s books for a mini-free agent run in the summer. Ditching that much salary would be a godsend for the Nuggs as they are nearly up against next season’s tax threshold and that’s before signing any draft picks, etc. Also Andre Miller is a miserable distraction and wants out of Colorado as soon as possible. Boom-boom-boom.

That’s all great for the Nuggets but what does Charlotte get out of the deal?

For one, it really only costs them a year of cap space – but this time, instead of renting it out for pick-bait like Ben Gordon, they’d be gaining useful rotation players. Second, and most importantly,  this trade is really about youth. Stick with me for a moment…

Having Chandler on the roster gives Charlotte a one or two year rental (via team option) on a tough defending, three point shooting small forward who has proven over his career that he doesn’t mind coming off the bench. I mean, could there be a better platoon mate for Michael Kidd-Gilchrist? MKG stays in the starting lineup while Chandler closes out games. The Cats have been doing this very thing recently, playing Anthony Tolliver in crunch time to space the floor. Wilson could do much the same with a much more varied offensive game and with little drop off at the defensive end. Better yet, Chandler’s team-option would expire the summer of MKG’s extension – if Kidd-Gilchrist develops like Charlotte hopes, he’ll be handed the full-time gig then without straining the team’s books.

Arthur’s presence does much the same for Cody Zeller, giving the Cats a low cost/low risk pick ‘n pop alternative while Cody adds strength and works on his mid-range shot. Darrell’s struggled this season in a new system but has shown in the past to be a decent pick ‘n pop shooter slash pick and roll defender in Memphis. Either way, he’s only owed $3.5 million for one more season – so the risk is minimal.

Finally, there’s Professor Andre Miller. Exiled after his public controntation with Brian Shaw in December, the 37 year old veteran is still on the Nuggets books for next season at a little over $4.5 million. What on earth could Dr. Dre have to do with the Bobcats youth movement?

Barring some late season miracle, the Detroit Pistons won’t be making the Playoffs this season and they probably have too much talent to drop inside the Bottom Eight – which means that Charlotte will likely get their first rounder and be picking somewhere between nine and thirteen come late June. I’m sure Rich Cho’s database has precise odds on this scenario but I can only go with my gut and my gut tells me that it’s better than 50-50. Say 65-35.

One of these three prospects are going to be on the board when the Detroit pick comes up: Marcus Smart (stock falling), Tyler Ennis (stock rising) or Zach LaVine (stock all over the place). Charlotte could absolutely use a long-term backup slash co-ball handler to team with Kemba. Playing one season with The Professor can only speed up a young point guard’s development, am I right? Not to mention what Kemba could learn from the old man.

In summary, adding a few short term rental vets could take some of the immediate (and unwanted) pressure off the young Hornets by giving them a little breathing room to grow into their full-time roles.

As far as this season goes, it’s hard to imagine Arthur being any more of a liability at either end as Cody is today. Chandler provides distance shooting off the pine without sacrificing perimeter defense – Wilson can also slide over to SG for stretches, allowing Clifford to stay big on the wings. Sessions’ and Miller’s games couldn’t be any different – Chandler’s bench scoring and Miller’s post-game and passing wizardry should be able to offset Sesh’s second unit offense for the most part.

And before anyone screams “this kills our chance at a marquee free agent this summer!” – have a look at the list of guys coming up. The most intriguing names will be restricted and near impossible to get. The one intriguing unrestricted, Lance Stephenson, won’t be coming to the QC without a massive overpay (which could be dangerous).

By the time the next meaningful free agency summer comes along in July of ’15 (Hibbert, MGasol, KLove, Aldridge all unrestricted), Charlotte’s books would be clean enough that they could throw max money at a guy if either Henderson or Big Al opts out of their player options (wink-wink) and re-signs long-term. Charlotte could also sign and trade those players. They’d have options then without sacrificing winning today or major Draft chips tomorrow.