Coming into the 2012 draft, Jeff Taylor was billed as an athletic defender and a quality shooter. That reputation was built on a senior campaign at Vanderbilt where he shot an impressive 42% on 4.3 attempts per game. His previous three years he shot 22%, 9%(!), and 34%. What did scouts think about such improvement in shooting? Essentially, meh. From ESPN prior to the draft: “How did scouts respond to Taylor’s steady improvement as a shooter? By calling his senior season a fluke.” Optimistic projections placed him in the mid to late first round, mostly based on his improvement as a shooter. He ended up going in the 2nd round (albeit the first pick in the 2nd round). Clearly teams listened to their scouts more than the national media. Sites that cover the draft love to exaggerate strengths and weaknesses and Taylor’s shooting was no different. This led to fans buying into the hype, mostly to the detriment of Jeff Taylor and, tangentially, Michael Kidd-Gilchrist, whose abomination of a jump shot has caused fans to suggest Taylor should be the start over MKG because of his pure shooting stroke. So the question is, has Jeff Taylor’s shot actually translated to NBA success? The short answer is, not really. The caveat to all this is the sample size. His rookie year, he only played 20 minutes per game in 77 games and in his sophomore year he tore his Achilles tendon after 26 games at 24 minutes per game. But who cares, let’s roll with it.

Looking at the raw numbers Taylor shot 43.1% overall, 34.4% from deep, and 72.8% from the free throw line in 2012-2013. Respectable numbers, but nothing special. To put the 3-point percentage in perspective, the average percentage of all players with over 100 attempts in 2013-2014 was 36.8%. That places him 115 out of 172 players under the same parameters. In 26 games in the 2013-2014 season his numbers were 37.6% overall, 26.9% from 3, and an awful 55.3% from the free throw line. A common story coming into the ’13-’14 season was the confidence Taylor exhibited as compared to the previous season. That confidence manifested itself in an increased usage rate, from 15% to 18.7%. As is often the case, an increased offensive burden hurt his overall efficiency going from a healthy offensive rating of 1.07 points per 100 possessions to an abysmal .86, per basketball-reference.com.

Drilling down a little deeper we can look at how he performed in different areas of the court. 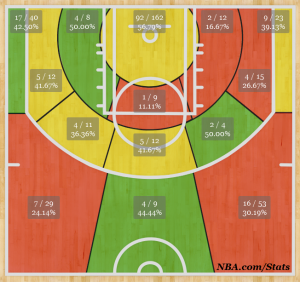 In the 2012-20131 season, he shot decently from the corners and the top and was an average finisher with a relatively poor mid-range game. That’s all good and well until you take a look at his shot distribution. 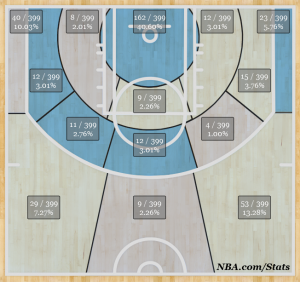 Taylor attacks the rim a fair amount, mostly on cuts, and shoots above the league average on such shots. That’s good, but his value is supposed to be in his ability to space the floor. More than 20% of his shots come from the wings where he shot 28%. From the top he shot 44.4% but that only made up 2.26% of his shots, a tiny sample size. Almost 16% of his shots came from the corners, the majority on the left side of the floor where he shot a solid 42.5%. Overall he was 41% in the corners, above league average. If the Hornets can get good ball movement off double-teams on Al Jefferson in the post, Taylor should be able to get open looks as the ball swings from the left side of the floor to the right while also allowing other players (MKG, Zeller, Henderson) to make cuts off the wing as defenders hug Taylor in the corner. This is the most encouraging piece of data. Less encouraging is the 20.82% of his shots that came in the mid-range while shooting 32.5% from that area. To be a floor spacer and not a weaker version of Henderson, he’ll need to take some steps back and ensure he’s stretching the defense. Attack close-outs and get to the basket or continue moving the ball.

Situational shooting is another valuable thing to take into account. Both Synergy Sports and SportVU only have data available for the 2013-2014 season and most of the time Taylor had on the court before his injury was while Jefferson was still recovering from his ankle sprain. They only shared the court for 167 minutes. A quick rundown on Synergy shows the majority of his attempts came as spot-up shots, accounting for 35.3% of his offense. He attempted 142 shots in these situations, shooting 30.7% overall and 33.3% from deep, pretty poor numbers. 54 of his attempts were 3 point shots and 38 were 2 point shots. On spot-ups, that’s a poor distribution for a floor spacer. He rarely handled the ball in isolation or off the pick and roll. As an offensive player the majority of his game is centered on these spot up opportunities, cuts, and in transition. As an average ball handler this is what should be expected of him.

Looking at SportVU data, Taylor shot 24.1% on catch and shoots2 on 3.3 attempts per game including 27% on 1.4 catch and shoot 3’s per game. On pull-ups he hit 17.6% on 1.3 attempts per game. His true bread and butter is cutting off the ball. He shot 59.4% on close shots but only 40% on drives, meaning he’s most effective being set up close to the rim. This is all small sample size stuff, but it doesn’t seem to be out of line with his rookie performance.

The question is, where does he go from here? A player with a reputation for shooting that really can’t shoot is not encouraging for a franchise desperate for that skill. There is a glimmer of hope looking beyond the numbers. He has solid mechanics on his shot. His off-hand can get a little over-involved at times but he sets his feet, squares up to the basket, has a nice, high release point, his elbow doesn’t flare out, and he follows through. His feet come out from under him a little too much when he jumps, giving him some negative motion even as he’s jumping forward. He has solid foot work in motion, using a jump stop to get his feet set, though I doubt Steve Clifford will have him doing much more than spotting up in the corners. One concern is his slow release. He takes a long time to gather the ball, including a slight dip before getting the ball into his shooting pocket. He might consider reducing the height of his jump on shots. Doing so would keep his feet under him while getting the shot up quicker3. He would also benefit from taking a step back. Research has shown there is value in attempting 3’s, even if they don’t go in.

There is a precedent for improvement. I would argue Jeff Taylor’s ceiling, if he maximizes his talents, is similar to Thabo Sefalosha. Both guys are 6’8″ and between 223 and 225 pounds. Sefalosha has a longer wingspan, but overall they are comparable players with similar roles on their respective teams. Sefalosha was drafted at age 20, Taylor at age 21. In Sefalosha’s first year, he shot 35.7% from 3. His second year, 33%. It wasn’t until his 6th year that he got over 33% with more than 1 attempt per game. From that point he shot 43.7%, 41.9%, then dipped last year to 31.6%. It’s possible last year was a down year shooting for him. It’s also possible those 2 good shooting years were a fluke. The same holds true for Taylor. His improvement shooting the ball in college can be seen one of 2 ways. Either he shot better as he got more comfortable or it was a fluke. Optimistically, if it took him 3 years to get comfortable shooting the college 3-pointer, he may just be struggling to extend his range to the NBA distance while also getting used to longer, faster athletes closing out. If that’s the case, you would hope to see improvement over the next 2 years. If not, he will struggle to get playing time. The truth is he has had pretty limited opportunities to get real in-game experience as a shooter. He shot 132 3’s in 2012-2013. That’s less than Luke Babbit.

Let’s move past the idea that Jeff Taylor is a good NBA shooter. He hasn’t been to this point. That doesn’t mean that he can’t improve. It doesn’t mean that the Hornets should give up on him. It does mean that people calling him to start over Henderson or MKG are paying too much attention to pre-draft hype and not enough to actual production. While the Achilles injury was a setback from an experience standpoint, it shouldn’t affect his ability to develop into a shooter. If he can do that, he’ll be an effective bench player for the Hornets. If not, he could have a relatively short NBA career.

All stats come from stats.nba.com except when otherwise noted.