Two years ago, just before the 2012 NBA Draft, Charlotte Bobcats GM Rich Cho struck a deal with his Detroit counterpart Joe Dumars that sent the aging, soon-to-be retired & expired Corey Maggette to the Pistons for free agent bust Ben Gordon. Maggette’s contract had one year left, Gordon had two. Dumars – perhaps sensing his imminent demise — wanted to make a splash in free agency the following summer so bribed Cho with a lightly protected first round pick in order to take on Gordon’s extra money.

When teams make trades like this, the logic is that they’ll be good enough, soon enough that the chance of the pick coming back to haunt them will be next to nil. But this was Joe Dumars (again) over-estimating himself and instead of using the early cap space to bring in an All-Star that could push the team into the postseason promised-land, he ended up splurging (yet again) on a disgruntled, ill-fitting veteran (Josh Smith) who sunk the franchise further and further down into Lake Rebuild. Presto-change-o. The Hornets received a 2014 Lottery pick from Detroit.

Conversely, for the seemingly low price of two seasons and $25 million worth of Gordon’s bullshit, Cho netted the Hornets a bona-fide, super-intriguing Draft surprise in Noah Vonleh. A surprise in that I can’t recall a single mock that had the Indiana freshman falling so far. He’s skilled, has ridiculous length and size for his age (he won’t turn 19 until August) along with a non-stop motor. There were no character concerns or fatal flaws to his game. No nagging injury problems. No lack of scouting coverage. I have absolutely zero idea how any organization could come to the conclusion that Aaron Gordon (he of the 40% free throws and lack of position) was somehow a safer prospect than Vonleh but that’s exactly what Orlando – a team many had pegged as the Vonleh landing spot – did at pick number four.
Here’s another surprise: good teams usually don’t get a hold of prospects like Vonleh. Unless you’re one of the psychics who run the Spurs or Thunder, it’s rare for a franchise in win-now mode to ever get this sort of opportunity. Massive props to Cho by the way for not getting cold feet and wasting the gifted Detroit pick on a plug & play rotation player – basically what Washington did last year with Otto Porter. He took a homerun swing to find a star.

Vonleh’s an interesting player. He has Emeka Okafor’s lower-body girth, strength and defensive aggression (along with some of his “mechanical” moves in the post). He also has Chris Bosh’s length, shooting range, and offensive versatility. Noah was projected as an NBA wing coming out of high school – one look at his handle will tell you that – but we still have no idea what his position will ultimately be. Like I said, Vonleh turns 19 in August – he’s currently 6’9″, 247 and could very well still be growing. Let’s say he tops out at a legit 6’10”, 265. That’s somewhere between Tiago Splitter and Nikola Pekovic – neither of whom have a 7’4″ wingspans. To me, that’s a future NBA center – one who can hit from the perimeter, bang with bigs inside for boards and protect the rim at an above average level.

BUT…it will take him a while to get there, it always does for big men and Hornets fans should be patient with Vonleh as he apprentices for a few seasons behind the most gifted post-scorer in the game, Al Jefferson. In the meantime, if you hear anyone talking about Noah starting for the Playoff-ready Hornets this upcoming season, do yourself a favor and MUTE, UNFOLLOW or turn off the radio. He’s gonna be good, just give him time.
GRADE: A+

For better or for worse, the Charlotte Bobcats franchise never gambled on any Draft prospect with off-the-court character concerns during their entire ten year history. The team was conceived at the end of the polarizing Iverson-Era and the league’s first black majority owner (and founder of the hip-hop-centric BET network) was wise not to further cool lukewarm regional support for his eponymous expansion team by way of knuckleheads. Bobcats Draft picks might not make any headlines on the court, but at least they wouldn’t make any off of it.

That streak was broken last night when Jordan, Cho and the re-christened Hornets selected former UNC shooting guard P.J. Hairston with the 26th pick. Hairston was deemed so unprincipled as a collegiate player that he was kicked out of a school that makes up fake classes for its players to attend. Note to PJ: Drive the speed limit when you have green and guns in the car.

So why would the Hornets risk their lockerroom sanctity and the swell of re-brand fueled regional goodwill on a question mark like P.J.?
ANSWER: He has unlimited range on his shot and the Bobcats were a tremendously poor jump-shooting team last season. The Cats ranked 19th in 3PT shooting percentage and 24th in attempts. In other words, nobody could hit from deep and they knew as much not to even try.

Any team with Al Jefferson as its offensive centerpiece needs to spread the floor in order to punish double-teams and guys cheating off their assignments. Josh McRoberts and Kemba Walker did solid work keeping their defenders honest, shooting around 35-ish% from deep. We all know Michael Kidd-Gilchrist can’t shoot (yet, fingers-crossed) but you need him out there guarding on the perimeter to make up for Al’s lack of rim-protection. That brings us to Hairston’s position, Shooting Guard:

Have a look at the following two shot charts. 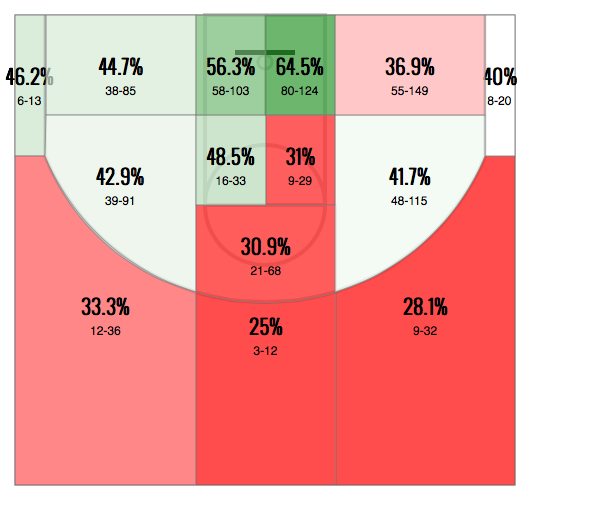 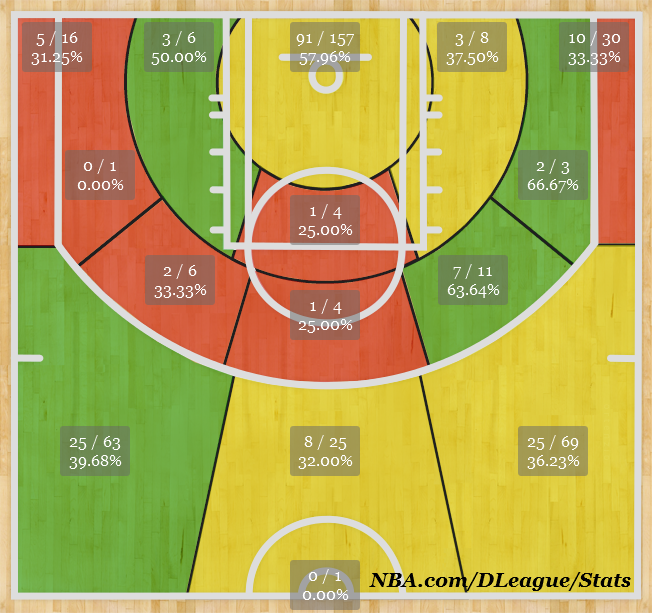 Hint: The top chart is of a guy whose name rhymes with “Gerald Henderson”. To be fair, Hairston accomplished his in the D-League – the level of competition isn’t remotely the same but you get the idea: P.J. loves to launch it from way out and he’s likely better at it than anyone currently on Charlotte’s roster. Hairston also has the size and skill level to play right away. He shouldn’t be anywhere near the Opening Night starting lineup but as a change-of-pace bench weapon, P.J. could be a key cog of the Hornets Playoff rotation next Spring. And who knows, if Charlotte strikes out in its pursuit of an All-Star caliber starting wing in free agency or via trade (Lance Stephenson, Gordon Hayward, Chandler Parsons, Luol Deng), Hairston could be playing big minutes by the All-Star break.
GRADE: A-

The Hornets used Miami’s 26th overall pick to take Hairston, a selection they received as part of the Shabazz Napier trade minutes earlier. Once the dust was settled, Cho ended up turning the 24th and 45th picks into PJ, a future 2nd Rounder from Miami, cash and cap relief. I haven’t seen the specifics of the money but believe the league limits “cash considerations” at around $3.2m per transaction. Judging from Pat Riley’s “extortion” claims, Miami may have paid that amount (along with two second rounders) in order jump up two spots and get Napier.

Cho then traded the Hornets own 2nd Rounder (Dwight Powell) to Cleveland for the rights to dump the final year of Brendan Haywood’s $2.2 million salary**. Getting rid of both the pick and Haywood trims an additional $3 million from the Hornets cap number – more on this in a bit. Finally, Cho sent this year’s 2nd Round pick from Miami (Semaj Christon) to OKC for yet more cash considerations.

Twitter was going a little berserk over such minor moves – but like most of the decisions Cho has made since arriving in Charlotte, they were savvy and could lead to bigger and better things down the road. Such as…

The Hornets now enter July with over $14 million to spend on a free agent, more than enough to add, say, Luol Deng or Lance Stephenson, and that’s BEFORE renouncing Josh McRoberts’ rights or shipping Gerald Henderson or Bismack Biyombo off in a salary dump. Make any combination of those moves and that number jumps to $20 million plus – otherwise known as Lebron/Carmelo territory. Will either of those guys sign with Charlotte? Doubtful. But Cho’s ability to improve both the team’s present and future on the same night speaks volumes of this franchise’s growth from the top down. Retire the jokes along with the Bobcats name. This organization is legit.
OVERALL GRADE: A++

*Whoever came up with that nickname is a genius by the way
**Cleveland also sent forward Alonzo Gee to Charlotte but his 2014-2015 unguaranteed salary is guaranteed to be declined.