How Rich Cho Rescued the Bobcats from Salary Cap Hell

The Carolina Panthers’ offseason of pain – fueled by a half decade’s worth of cap mis-management – reminded me of just how great a job Bobcats general manager Rich Cho has done in cleaning up the Bobcats’ books. Though Cho has struggled somewhat in the Draft, the guy is an undeniable Salary Cap Genius. And when I say undeniable, I mean UNDENIABLE. Have a look at the Bobcats salary chart as of July of 2010, the summer before Cho arrived (click for a larger image):

The miserable story behind these numbers is another post for another day. For now let’s just fast forward to July 2014:

Look at those gorgeous books! It took the team four long and mostly gruesome seasons but they finally did it. Gone are the days of the Gana Diop mid-level monstrosities and the Eduardo Najera “14th Men for $5 million” deals. Gone are the five year, $40 million contracts for perpetually enigmatic weirdos (T-Time). Outside of maybe the relatively minuscule miscues of Brendan Haywood and Bismack Biyombo (slightly overpaid $3.8 million), there isn’t a bad contract on the roster.

Whereas Larry Brown and Rod Higgins would’ve traded for over-priced role players in years past, Cho instead scoops up under-valued guys on the NBA’s fringe. Chris Douglas-Roberts and Anthony Tolliver were barely in the league last season and Charlotte’s paying them a combined $1.4 million to be key rotation players on a Playoff team. I’ll take that over $18 million of Gana Diop any day.

Check out these cap beauties:

The team’s strategy has been simple: 1.) invest in cheap rookie contracts, 2.) dump attractive assets on long-term deals for picks and expirings, 3.) don’t sign free agents above market value (especially your own) and, finally, 4.) let father time take care of the rest.

Breaking the third rule is what got the Panthers into their current mess and what ultimately led to the Bobcats cap problems back in 2010. Charlotte bid against itself when the Cats re-signed Emeka Okafor in ’08 and the enormous contract ultimately led to them dumping Tyson Chandler for nothing two seasons later. By contrast, Cho strong-armed Henderson’s agent last summer – fully aware that as a restricted free agent, Gerald had little leverage in the negotiations. Presto! Hendo signed to a very reasonable three year deal.

Cho’s management of the cap has given Charlotte a tremendous amount of flexibility going forward. If Josh McRoberts opts out of his player option this summer (basically a given) and the Cats renounce his rights, they’ll be able to throw up to $12 million at a key free agent or absorb one via trade. If, for instance, the Wolves make Kevin Love available, Charlotte has the juice to trade Minnesota a prospect (Cody), a lottery pick (Detroit’s) AND cap space. That’s a Godfather offer difficult to trump. 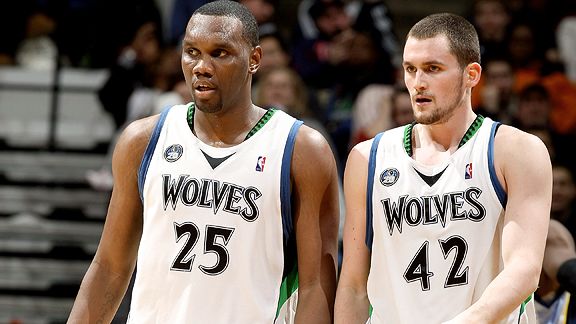 Of course, there’s probably a better chance that neither K-Love, Luol Deng, Gordon Hayward or any other marquee free agent or disgrunteld vet make their way to the QC. In that case, Charlotte’s still fine. They can #BringBackMcBob on a front-loaded deal and save a little cash once Kemba’s extension kicks in the following summer. They could use the rest of their cap space to sign a decent backup PG to a short-term contract (the return of Ramon Sessions?) and bring back at least one of the Tolliver/CDR duo for wing/frontcourt depth.

Should that scenario play out, the Hornets could enter into next season as a Playoff team with upside AND tidy books: 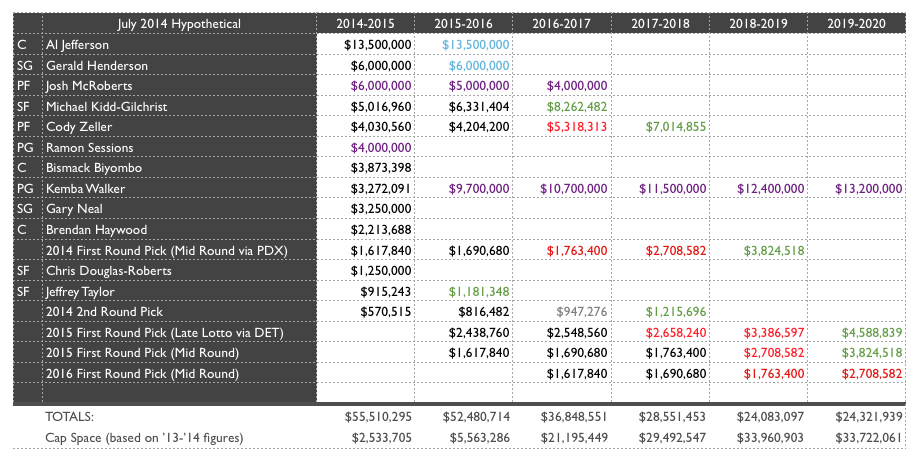 A few notes on the chart:

In summary: We may question the selection of Biz in the Lottery. We may ponder what Bradley Beal, Damian Lillard or Andre Drummond would’ve looked like in teal & purple. But when it comes to mastering the salary cap and wrangling the teams’ once wild books, Rich Cho has proven infallible.

2 thoughts on “The Mastermind”