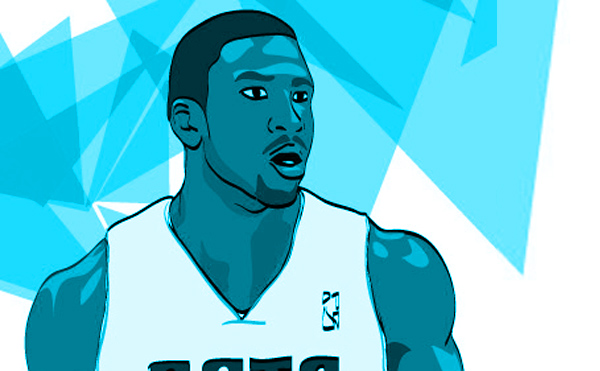 Michael Kidd-Gilchrist has the skills and potential of an elite defender in the NBA.

That line, or several similar variations of it, has been steadily delivered from the Bobcats organization since claiming the prospect with their top draft pick in 2012. They’ve beaten that drum so consistently, that it resonates down to each generic Bobcats write-up on sports media websites.

Inconveniently, that talking point just isn’t holding up. Perhaps, the organization can be excused for trying to deflect the attention away from MKG’s offensive woes. Or, you can commend them on their focused efforts to prop up the perceived value of the club’s young asset. By labeling him as an “elite” defensive talent and staying the course with that singular message despite his performance, we get to enjoy a bit of political theater with the franchise this season. By now it’s common knowledge that the Charlotte Bobcats have no clue as to how to select a player in the NBA Draft, especially the Lottery. As it’s becoming fairly clear that they honored that reputation by selecting Kidd-Gilchrist in 2012, GM Rod Higgins, Rich Cho, and Coach Steve Clifford have shown great synergy, working in concert to teach us the chorus of the MKG is Actually Really Good song.

Kidd-Gilchrist has shown some incredible athletic ability and his strengths appear to lie on rebounding and defensive areas of the game. So, he could really expand his game and become a sound pro player over the next few years. But the myth of MKG as an elite, top-tier, or lockdown defender is starting to fade in his second season. Back in late January, we saw Carmelo Anthony get hot and abuse the Bobcats in New York. Melo’s career-high 62 points came easy on a night where he started with a matchup against the overwhelmed MKG. Surely, the Bobcats locker room did what they could to keep Kidd-Gilchrist from sinking after being stripped of the only weapon he’s got – the label of a lockdown, defensive stopper.

Now, in early March as the Bobcats struggle through a treacherous series of games against the Association’s absolute best, it looks like the team will need to gather around young MKG to help him recover from another horrific beating. On Monday night, Lebron James stepped on the court and immediately got to work, dismantling Kidd-Gilchrist and the Bobcats as a whole. If the Bobcats truly had an “elite” level defensive player on their roster, you would hope they’d put him on the floor with orders to minimize some of the damage. Well, they sent MKG in the game instead. Lebron finished the game with his career high 61 points, and further elevated his own status as a sports legend. This must have been crushing for a young guy like Michael Kidd Gilchrist. Lebron has had some incredible games over his career, but he hadn’t scored this many points until catching fire against such a favorable matchup.

If the evidence is showing us a player that’s not a once-in-a-generation defender, then what are we seeing? It’s starting to look like a young athlete that’s being mislabeled, and in danger of crumbling under the pressure of wrongly assigned expectations. Let’s hope Steve Clifford realizes what he’s got with MKG, rather that what he wishes he had. It might be best if Clifford gave Kidd-Gilchrist the Cody Zeller treatment and eased him into a proper role with the team and limited him to productive minutes.

Let’s be straight here – this isn’t at all about MKG’s lacking set of skills on offense (an entirely separate story),  this is about the packaging that the team is aiming to sell. They’re trying to convince the fans, the league, and probably their own players on the belief that Michael Kidd-Gilchrist is great at doing something on the basketball court. Unfortunately, we’ve heard this tune before when it was called “Bismack Biyombo” and we’ve seen the raw, live performance from a better act named “Gerald Wallace” a few years back.

The Charlotte Bobcats franchise made the calculated and coordinated choice to lose all but seven games in 2011-2012 for the chance rebuild through the NBA Draft. Just about everyone would call that tanking. Critics of tanking usually base their view on the fundamental idea that losing to win has no place in sports. To those folks, the 7-win Bobcats coming away with MKG with their second overall pick in 2012 probably sounds like justice.

2 thoughts on “The MKG Myth”