Against the Grizzlies last week, the Hornets struggled to get anything going offensively. The fans’ natural response was to beg for one of the best shooters on the team, PJ Hairston, to get on the floor. Those same fans were also booing Gerald Henderson every time he came in the game, so there might have been some other agenda in play, but the unknown is always exciting and rookies are the ultimate unknown in the NBA.

With Michael Kidd-Gilchrist suffering a rib injury and Gary Neal getting poked in the eye, there were suddenly minutes available on the wing against the Heat. Enter PJ. While he struggled with his shot, nobody is worried about that. He’s too good of a shooter to not find his stroke. The question has always been about his attitude and whether or not he has the defensive chops to stay on the court. 5 games in an NBA season is a tiny sample size. 2 games totaling 30 minutes is a crap shoot. I seriously doubt he shoots 22% from 3 all season. So with statistics out the door, it’s, “To the tape Batman!”

Shooting aside, the offense is worth a brief look. PJ’s offensive game clearly shows the benefits of the D-League. He understands NBA offense. He moved with confidence, found open spots on the perimeter, made himself available for kick-outs, and attacked the defense when a lane was available without ever forcing it. Surprisingly, he didn’t play the part of a gunner, more of a key offensive cog. All really good stuff.

That’s all good and well, but the defense is what Coach Clifford is watching. Unsurprisingly, it was a bit of a mixed bag. His performance can be broken down into 3 components: scheme, technique, and effort.

Just as with his offense, PJ’s ability to execute an NBA style defensive scheme reflects his experience in the D-League (seriously, if they can get salaries up, this is a much better option than college as far as development is concerned). In general, he stuck to the defensive blueprint. He helped and recovered on drives, bumped the roll man and got back out to his man, downed the side pick and roll (as seen below)… For his second NBA game he did everything expected of him. 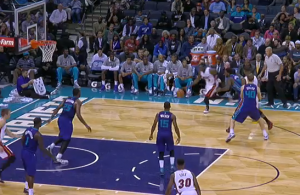 That’s not to say all was good schematically. At times he over-helped on the weak side, getting stuck in no man’s land, and failed to close hard with his hands up on the kick-out pass. 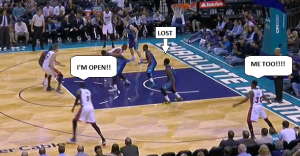 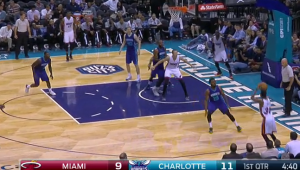 Most of PJ’s struggles can be tied to his defensive technique.

In the below picture, you can see the aftermath of good schematic execution coupled with poor technique. PJ helps down off is man to bump Bosh as he rolls to the rim after setting a pick. Once that action has been turned away, he goes to recover to his man, Luol Deng, who has cut up from the corner to the left wing. What you see is a bad angle on the recovery coupled with poor balance (it’s like watching the Panthers’ secondary), all resulting in an easy 2 for Deng. 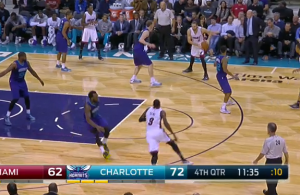 PJ’s up-and-down nature on defense comes together in one play. He fights hard over a screen in the first picture, forcing the ball handler towards the baseline and preventing him from splitting the defense. In the second picture he sprints back, never giving up the pull-up jumper and continuing to push the ball towards the baseline. All really good stuff so far. Then things fall apart. Rather than squaring up to suspend the penetration or continuing to push the ball through, Hairston loses his balance and gets turned around with his back to the defender. Lucky for him, no foul gets called and the play results in a poor shot attempt and a stop. 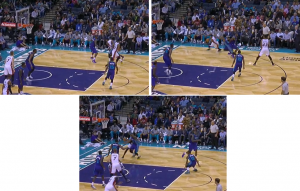 It’s not all bad with PJ. One thing that stood out was his balance when closing out on shooters. He’s able to contest without fouling even on going hard. He did a decent job staying in front of ball handlers, though he was mostly guarding Luol Deng and Mario Chalmers, not really known for their isolation skills. He also uses his body and hands well off the ball, impeding the progress of offensive players without fouling.

The scouting report on PJ before the draft questioned his focus, particularly on defense. Surprisingly, there didn’t seem to be much of that against the Heat. He was attentive, communicating both verbally and with hand signals. He didn’t get beat on cuts. He didn’t pout or hang his head. He was engaged in the huddles and responded well to Clifford’s criticisms and instructions. This manifested itself in a much better effort in the second half.

Quick sidetrack to the negative so we can end on a happy note. One thing PJ can work on is staying in a stance. He also needs to play bigger. At one point he just lets Deng back him down and shoot right over the top.

With his size, I imagine the hope is that he can swing between SG and SF. To do that, he’s going to need to have the strength and put forth the effort to prevent easy plays like this.

Stays with the fake, fights through a screen down low, and erases the easy bucket. That’s the whole package. Discipline, technique, and maximum effort. He wasn’t perfect, and having MKG back reduces the available minutes, but Clifford has to be happy with what he saw from Hairston. Personally, I was pleasantly surprised with what I saw. If he can work hard to fine tune some things, Hairston could end up being a steal from the 2014 draft and a perfect fit on this roster.