The Hornets will pay MKG that rate over four seasons starting next July – approximately three months before the former number two overall pick turns 23. The deal is one year shorter and $1 million less per season than the one Khris Middleton just signed with the Bucks and around two thirds more than Al Farouq Aminu received from the Blazers.

In  2013  the NBA’s cap was set at $58 million. Thanks to the new TV deal, the 2017 cap is projected at $108 million – a 90% increase that nearly doubles the amount teams have to spend. And since the league hasn’t added any new franchises or vastly expanded roster limits, that money is going directly into the pockets of the same pool of players.

You are certain to hear a local sports talk rant (or ten) in the next week about how MKG isn’t worth close to this much cash and that’s due to many not understanding the basic dynamics of the new cap. It’s a simple conversion really: just take MKG’s $13 million salary and divide it by 90%.

This reveals a 4 year, $27.5 million deal with an average salary of $6.875 million. Keep in mind than in 2013, when the cap was 90% lower, Gerald Henderson signed a 3 year, $18 million extension with Charlotte at $6 million per. So in relative terms, MKG signed for a little north of Hendo money. Bad for sports talk radio and internet trolls, good for the Hornets.

MKG didn’t have to sign an extension this summer. He could’ve waited it out and tested the very tempting waters of Free Agency 2016. As former Nets exec Bobby Marks noted in his excellent piece for Hoopshype last month, 24 of the league’s 30 teams will have cap space next summer with an estimated $825 million to spend. Peruse the list of next July’s free agents and you will find a dearth of quality unrestricted players worthy of that type of cash.

In years past, teams could use the restricted status of their own free agents to ward off offer sheets from hungry franchises with big space. That will change next July. Andre Drummond, Bradley Beal and Harrison Barnes are virtual locks to get max offers and if MKG has the breakout season Charlotte is hoping for, you could’ve easily added him to that list.

But Kidd-Gilchrist has missed over 50 games in his first three seasons with a variety of injuries. Like Gerald Wallace before him, MKG plays at only one speed – FULL ON – and that reckless energy has a tendency to lead straight to street clothes.

Kidd-Gilchrist will only be 26 years old at the end of extension and at the beginning of his prime. If his jumper keeps making progress and he can stay on the court, MKG will have another legit shot at a max-type deal. If not, he’s set himself up very nicely with over $70 million in guaranteed career earnings.

WHAT COMES NEXT – HORNETS FREE AGENCY 2016

Extending MKG this summer greatly reduces the burden on Charlotte’s front office next offseason. The team’s highest paid players (Nic Batum and Al Jefferson) will become unrestricted free agents. Jeremy Lin is a near guarantee to opt out of his deal and test the market. Jeremy Lamb will be a 24 year old restricted free agent who can shoot and (maybe) defend.

Depending on how the season plays out, Charlotte will aim to bring back each of these key players. Removing MKG from the list of moving parts is huge. And getting him at such a reasonable number leaves the team with around $45 million to spend on bringing all of those guys back.

In fact, I wouldn’t be surprised if the Hornets started negotiating with Lamb on a rookie extension today. Throw an offer of, say, 3 years, $18 million and see if he bites. Sure, the jury’s still out on Lamb as a high-end rotation player but $6 million in 2017 dollars is just a touch over $3 million per in relative terms. It’s worth a shot.

The Hornets could then throw big 3 year deals at both Batum and Jefferson and bring back Lin at a reasonable number if he thrives in the Queen City. All while maintaining flexibility for the following summer when Steph Curry becomes a free agent. See the Projected Salary Chart below: 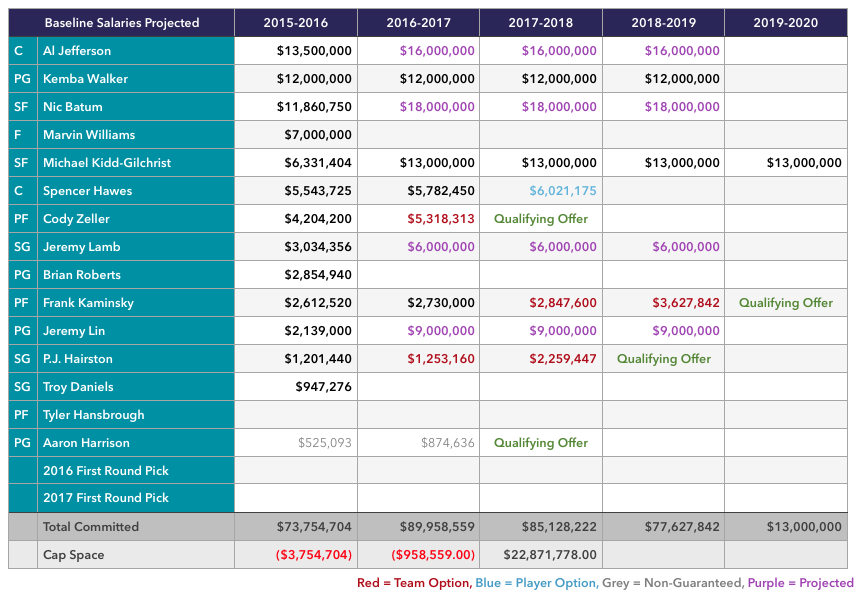 It was reported on Wednesday that the final year of MKG’s contract will be a player option, giving Kidd-Glichrist the ability to hit the market as an unrestricted free agent again at the ripe young age of 25.

The player option also times MKG’s free agency perfectly with Kemba Walker’s. One of the most interesting pieces of information to come out of the extension coverage is just how close the two players are off the court. While each player has their share of work to do to make the All-Star leap, both are extraordinarily high character, team-first individuals who will set the tone for the roster and organization as they mature into veterans.

By inking both players until 2019, the Hornets are essentially giving themselves a four year window to win with this roster. Expect the team to pursue similar three year extensions with Nic Batum and Al Jefferson in the offseason to complete the core.