No, not the Bobcats third straight loss to open the preseason, the speculation that our first Larry Brown-induced trade may be coming soon, or the possibility that this is the beginning of the end for Adam Morrison. Those are all plenty disappointing; but what I’m really referring to is this: 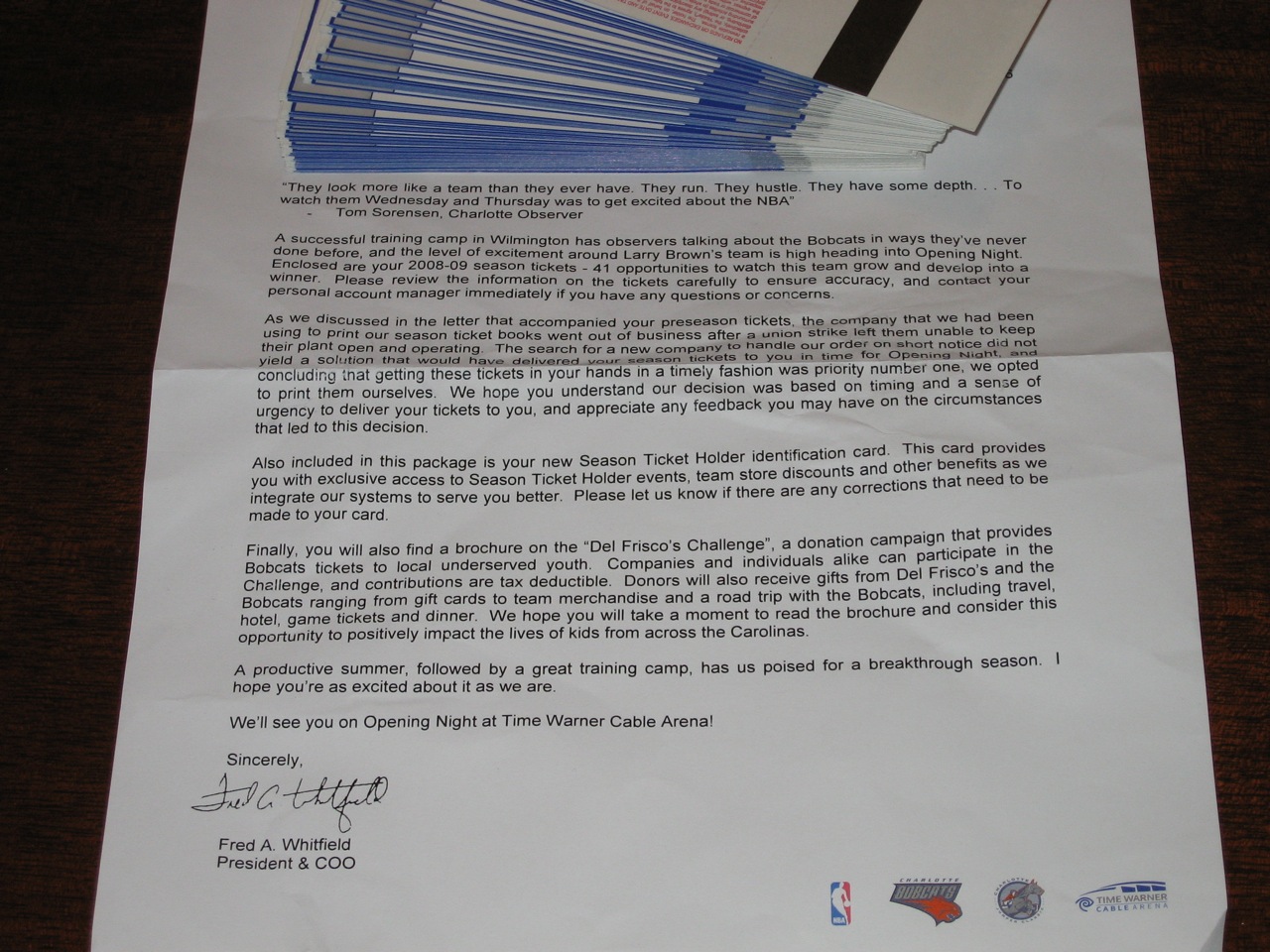 That’s how my season tickets came today. Left resting on my doorstep was a crinkly medium-sized white envelope containing the above crumpled letter, the brochure for a ticket donation program, my Season Ticket Holder ID card, and a stack of plainly printed, ticketmaster-style loose tickets with a couple of rubber bands around them. Hella lame…

You see, I was hoping to be able to post something more like this, a great post from Warriors blog Golden State of Mind detailing the arrival of the blogger’s 2007-08 tickets last year around this time. Looks cool, huh? The tickets are nicely printed up in little books with decent graphics, the letter is on fancy paper (and not wrinkled up) and they even included a chintzy promotional bag. I suppose that’s how a proper franchise does things.

But not the Bobcats. I suppose I shouldn’t really be surprised — this is the franchise that just recently let about 35 employees go and considered dropping radio broadcasts as a way to save money. And don’t get me started on owner Bob Johnson’s trip to Charlotte earlier this year to whine to the papers and local businesses that they weren’t doing enough to support his investment. We know now that Wachovia and Bank of America had bigger things to worry about than bailing out the Bobcats.

In fairness, here’s a portion of the text of the letter, which you may or may not be able to make out above:

“…the company that we had been using to print our season ticket books went out of business after a union strike left them unable to keep their plant open and operating. The search for a new company to handle our order on short notice did not yield a solution that would have delivered your season tickets to you in time for Opening Night, and concluding that getting these tickets in your hands in a timely fashion was priority number one, we opted to print them ourselves. We hope you understand our decision was based on timing and a sense of urgency to deliver your tickets to you, and appreciate any feedback you may have on the circumstances that led to this decision.”

Well, consider this my feedback. These tickets are bush-league. As for the sob story about the printer? As if there’s only one, or even just a few companies that can do this kind of print job. There must be plenty, and when the ability of the preferred one to do the job came into question, it shouldn’t have been too hard to take the business elsewhere. Maybe there would have been a slight premium to do a rush job, but even that isn’t a great excuse — this should have been dealt with well in advance of “Opening Night”.

What I really wonder about is whether the muckety-mucks just saw a great opportunity to shave a chunk of change off the bottom line by printing the tickets in-house. That seems pretty consistent with the ways of the Bobcats front office, dontcha think?