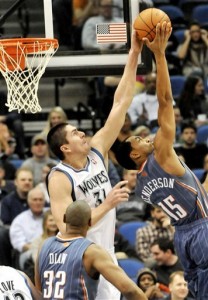 Blech. On the plus side, he didn't try that shot again. (AP Photo)

So, last night I decided to grab some comfort food, sit down with my Tivo and make my way through the third quarter often watching in slow-motion. Let’s go through the defensive problems first:

Oh God. Now to the problems on offense.

But can these problems be corrected?

To a degree, yes. Most of these problems are fairly easy to fix. Force the players to concentrate on boxing out and rebounding. Solve the easy, energy-related problems. As for the inability to make shots, this isn’t as easily fixed. The Bobcats are mainly comprised of slashers and not shooters. And the shooters we do have aren’t extremely talented so when a couple of our best snipers are either injured or are just missing their shots, there is no backup plan. You just have to hope that the Basketball Gods are smiling upon you and that they will bless you with Eduardo Najera treys and Dominic McGuire baseline jumpers. That’s what should really worry us about these recent troubles. It’s a problem that goes far deeper than just gameplan; it’s a problem of roster talent.