The Charlotte Hornets made a major splash during July’s free agency sweepstakes, inking rising star Lance Stephenson to a three year, $27 million contract. Although there was a bit of drama leading up to the particulars (“who” and “how much“), the decision itself wasn’t a surprise. An upgrade at one of the wing positions had been anticipated since mid-season, when it became apparent that Charlotte’s potent inside-out attack led by Al Jefferson and Kemba Walker was hamstrung by perimeter guys who either couldn’t shoot (Michael Kidd-Gilchrist) or who were hesitant to do so (Gerald Henderson).

Flash forward to the 2014 Playoffs: Charlotte’s post-season cameo versus the Miami Heat was brief but featured a few bright spots to build upon, notably:

MKG’s performance in Game Two was his best as a pro. At just twenty years of age, he pestered the league’s best player on defense and aggressively attacked the rim on offense. With Big Al hurting and the spotlight on, MKG stepped up and showed cynical fans and nervous Charlotte execs that the former number two overall pick might not be a bust after all. Kidd-Gilchrist’s all-world defensive abilities and untapped offense potential make him the odds on favorite to remain in teal in purple now that Lance is in the QC.

Some have assumed the Stephenson signing simply pushes Gerald down the depth chart a notch as the team’s third guard and sixth man. That’s an assumption I’m just not buying, mainly because:

A.) Third guards are rarely mid-range, grinder types. Outside of his excellent off the ball abilities, Hendo often takes forever manufacturing his offense and rarely do those posessions end in threes. Ideally, you want your bench guy to be a gunner – a Jamaal Crawford, Isaiah Thomas, J.R. Smith type who can generate points both in bunches and in a hurry.

B.) Charlotte has exactly two of those types of bench scorers already on the roster (Gary Neal, P.J. Hairston) whose games’ are much better suited for the role.

C.) Hendo can play some small forward in a pinch but at 6’4″, he’s a small-small forward. Coach Clifford prefers size and the team has MKG, Jeff Taylor and Marvin Williams logging minutes there already. Which brings me to…

D.) There simply aren’t enough minutes to go around. Hendo has averaged north of 32 minutes per game over the past three seasons. A team captain, I find it difficult to believe that Gerald will be ok with taking a DRASTICALLY reduced role in the prime of his career with a potential new contract (he has a player option for next season) on the horizon.
Have a look at this simple minutes chart: 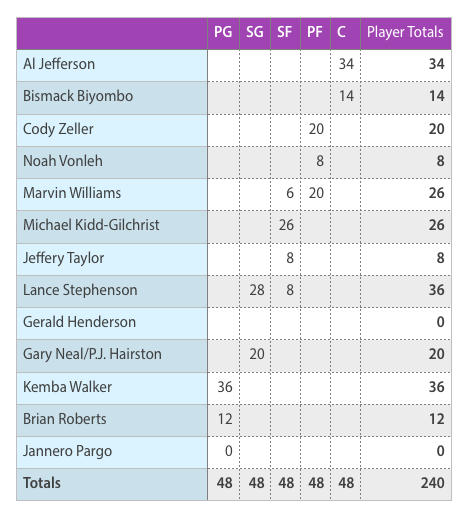 Even if we assume that Hendo takes all of the Neal/Hairston minutes, that still leaves Gerald twelve minutes shy of his recent average. Sounds like a recipe for three unhappy guys to me. Besides…

E.) Hendo was actively shopped to at least two teams leading up to July’s Draft: Charlotte offered Henderson and the 24th overall pick to Orlando for Arron Afflalo. There was also an unreported, but since confirmed trade (by the Baseline’s own @benweinrib) proposal that would have sent Gerald to the Clippers for the 28th overall pick. Think of it this way, if Hendo was on the verge of being dealt BEFORE the Hornets secured a new starter at SG, then what’s stopping them from doing the same now that they have Lance?

This post may as well have been titled “Biyombo and Hendo Trade Scenarios”. I’ve written about What To Do with Biz extensively so go read that first if you feel that his inclusion is misplaced. Either way, Biz and Hendo represent a combination of redundency and value while their salaries combine to fit nicely into several two-for-one swaps.

WHY CLEVELAND DOES IT: Once the Kevin Love trade goes down, Cleveland will be desperate for both a starting SG and a center who can play more than fifty games a season. Dion Waiters’ ideal role is as a meaty Jamaal Crawford bench scorer and Hendo slots in nicely as the starter and fourth option. Gerald pads Lebron & K-Love’s assist numbers with cuts to the rim on offense and gives the Cavs at least one guard who gives half a crap on defense. Meanwhile, Biz supplies the flammable Love/Kyrie combo with rim protection and won’t, I repeat, WILL NOT be required to touch the ball…EVER.

WHY CHARLOTTE DOES IT: Let’s face it, Varejao is going to get hurt at some point during the year. It’s inevitable. But during those 50-60 games he does play, Anderson will allow Charlotte to do some amazing things with their second string center…like catch the ball, run basic pick and rolls, etc. Beyond that, he’s an expiring contract, thus the Memphis late first rounder as a sweetener. It’s a little help now, a little help in the future for the Hornets – all for two guys who likely aren’t in the team’s long term plans anyway.

WHY BROOKLYN DOES IT: The Nets need a legit SG in the worst way. Now that Paul Pierce is gone, Joe Johnson will likely move to small forward full-time and Sergei Karasev isn’t going to cut it as the starter. Bismack gives Brooklyn a third rotation big to backup oft-injured Brook Lopez and even allows the Nets to trade either Lopez or Mason Plumlee for a legit piece at another position down the road.

WHY CHARLOTTE DOES IT: This is crazy, right? KG is old, on an expiring contract and has lost about ten steps. There’s also this caveat: Garnett has a no-trade clause and can shoot down any deal. So why would either side agree to this?
If you’ve made a major investment in VERY young players, why not give them a role model, a leader and a mentor? Say Lance or P.J. get out of line in practice, with Garnett around, they may think twice. If Kemba, Lance, MKG, Cody Zeller or Noah Vonleh become stars one day, they may look back at their season with KG as a lesson in leadership. This stuff matters. It’s one of the reason San Antonio has been able to build and maintain their culture for so long and one of the reasons Washington went after Pierce.
As for Garnett himself: D-Will and Joe Johnson are older, Pierce and Livingston are gone and Blatche is still unsigned. Do you bet the last season of an illustrious career on Brook Lopez’s feet or do you join the best young team in the Eastern Conference?

WHY OKC DOES IT: The Thunder have some very young wing talent on the roster in Jeremy Lamb and they just signed Anthony Morrow as a floor spacing rotation guy. But do you really want either of those guys playing meaningful Playoff minutes? Defensively, Gerald is better than both of those guys and while he might lack the raw offensive upside as Lamb, his pro game is much further along. A Hendo/Reggie Jackson/Russell Westbrook three guard rotation with a little Morrow mixed in is solid. Also: we get to hear an exasperated Biyombo and Ibaka duo explain that there are “two Congos” for an entire season.

WHY CHARLOTTE DOES IT: Perk catches a ton of flack and he’s nearly the turnover machine that Biz has been over the past couple of seasons. But he’s a tough as nails veteran big who can neutralize opposing bigs. Kendrick may not be flashy but he knows NBA defense. Clifford will love having him back there. Roberson’s an intriguing combo forward who played well in the D-League last season. He’s on a cheap rookie deal and is some nice insurance should Jeff Taylor’s recovery stagnate or if Taylor bolts via free agency next summer. The pick would be a highly protected first.

NOTE: Free agents signed during the summer can’t be traded until December 15th, so this one would have to happen mid-season.
WHY MIAMI DOES IT: Unless they want to go VERY small with two PGs when Dwyane Wade misses time, the Heat will need to add some quality wing depth and who better than Wade-lite? An iso, post-up, volume-scoring mid-range doppelganger who could slide right into the starting five during Wade’s sabbaticals, Hendo is just what the doctor ordered for a Miami team that’s in no position to tank (they owe their first round pick to the Cavs).
Meanwhile, McRoberts and Chris Bosh are similar players who likely won’t play all that much together, especially with Udonis Haslem and Chris Andersen back in the fold. And with Lebron’s July surprise, both Josh and the Heat may decide that this wasn’t a great idea for a variety of reasons.

WHY CHARLOTTE DOES IT: Uhh…like, duh…