In part one of my Capped-Out Cats column, I soberly laid out the current Bobcats salary cap situation in order to highlight the tight financial quarters which the team currently operates under. We as fans cannot realistically prognosticate the team’s ability to improve itself without first having a realistic understanding of what it is up against. Or, as Sir Arthur Conan Doyle put it, “Prescription without diagnosis is malpractice.”

Thus far we’ve identified the team’s salary situation (nearly capped out with two key free agents yet to re-sign) and we’ve established the team’s needs moving forward into next season (starting PG, traditional low-post presence, bench scoring). The challenge is to find a way to accomplish them both:

Can’t think of a more eloquent trade for both teams. The Bulls currently employ only six players, three of which are starters (Deng, Noah and Rose) and will be making a run at one of the top free agents in the League this summer (potentially Lebron James or Joe Johnson). Diaw starts for the Bulls immediately (or is the team’s sixth man in case of a Bosh or Boozer signing) and allows Derrick Rose to play off the ball in certain situations. Also, Diaw and Hinrich have nearly identical contracts (Boris is due an extra million in ’11-’12) and nearly matching PERs (Hinrich: 11.61, Diaw: 12.80).

For Charlotte, the deal nets them a tough defending starting point guard without having to go over the cap to sign one on the open market. While Hinrich isn’t going to any All-Star games, he’s at least Raymond Felton’s equivalent (especially in the five seasons proceeding Derrick Rose’s arrival) and is big enough at 6’3” to move over to shooting guard for a few minutes a game when needed. Hinrich isn’t a pure point in the mold of a Steve Nash or Chauncey Billups but won’t need to be on a team that runs its offense through shooting guard Stephen Jackson.
Again, the overwhelming positive of this trade is that it allows the Bobcats to maintain a player of comparable quality at the point without having to add a dime to the payroll.

At current market value, I can’t see Tyrus commanding anything north of 3 years $18 million. The Hinrich trade makes re-signing Tyrus much easier by a.) allowing the team to match a poison pill offer should another team extend one and b.) freeing up a starting spot for Thomas – thus making the idea of returning to Charlotte that much more enticing. A best case scenario would have Tyrus sign an incrementally escalating deal (see chart below) that would start at $5.5 million.

Step 3. Sign or trade for a backup power forward.

After making the moves for Hinrich and Thomas, the ‘Cats will have a little less than $4 million to sign a free agent backup PF. The team is in desperate need of a low post scorer who can battle for rebounds down low. At this price point, there’s not a lot of options. One could be Drew Gooden, who signed a one year partially guaranteed $4.5 million deal with the Mavericks last summer and was traded to the Clippers midseason for his efforts. A two year deal (either fully or partially guaranteed) at $7 million might get his attention. A more under-the-radar prospect would be New Jersey’s Kris Humphries who impressed often on a bad team. Humphries is a beast of rebounder down low (averaging almost six and a half boards in twenty minutes of action) and is a bit of a black hole when he gets the ball in the low post. Basically, he’s the anti-Boris Diaw and that sort of style could mesh well with Larry Brown’s Bobcats.
Another option for the Bobcats is to add power forward depth via trade. While I don’t like the idea of the team trading away expiring contracts in this Prescription, one such deal could have the team ship off Nazr Mohammed and the last remaining year of his contract ($6.8 million) to the Sacramento Kings for bruiser Andres Nocioni ($6.8 million in ’10-’11, $6.6 in ’11-’12).
The negative in this scenario would be adding another mid-level salary contract year for a mediocre player in 2011-2012 but Nocioni’s toughness and ability to play both forward spots combined with the cost savings of making a cap neutral trade might swing the Bobcats into making the deal. Add in the fact that the ‘Cats could then use the remaining $3.5 million on re-signing veterans Flip Murray and Theo Ratliff to minimum deals and the trade could provide much more than it costs. 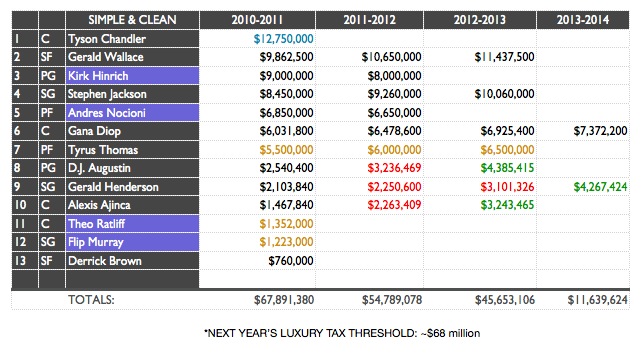 In this Prescription, the Bobcats manage to re-sign Tyrus Thomas, add a comparably talented starting Point Guard in Kirk Hinrich, find a low post bruising backup forward in Andres Nocioni and make good on last year’s mistake of trading away Flip Murray. Amazingly, they could do all of this while CUTTING SALARY (nearly $2 million) from last year’s payroll while keeping all of their young players (Augustin, Ajinca, Henderson and Brown) and key veterans.

NEXT UP: PRESCRIPTIONS B + C (Not for the Faint of Heart).