Prior to the 2004 NBA Draft, former Bobcats GM/Coach Bernie Bickerstaff managed to hoodwink the lowly Clippers into trading down from #2 to #4 in order for Charlotte to select Emeka Okafor.  That was the first and last great draft move made by the organization and ever since then Bobcats fans have been subjected to picks ranging from mediocre to mind-numbingly stupid.

A quick recap for the masochistic:

So it might amaze the few people out there who are actually paying attention to all of this that the Bobcats just completed their first intelligent, completely rational, well-scouted and well-executed draft in five years.  WOO-HOO!!!

They didn’t royally screw it up as they did with May, Morrison or Ajinca.  They didn’t desperately reach for decent players like Felton or Augustin earlier in the lottery.  Nope, in Duke’s Gerald Henderson they picked a solid player from a great collegiate program who fits a position of need at exactly the spot they should have.  And to top it off, they added another great value pick (Xavier’s Derrick Brown) mid-way through the second round.  Props to MJ, Higgins and Coach Brown for killing it last night.  Your efforts are much appreciated.

STATE OF THE ROSTER

Now that we know who the picks are, it’s easier to see what the Bobcats will be focusing on once we hit free-agency in the next two weeks. 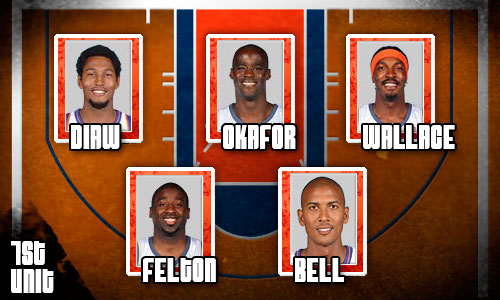 As of today, the starting lineup remains the same.  Henderson only starts if Raja goes down for any stretch.
Keep an eye out for anymore Dalembert rumors between now and next week.  If a Dalembert deal goes down, look forward to a summer of madness because this likely means that Emeka will be shipped off at some point to bring in a big-time scorer. 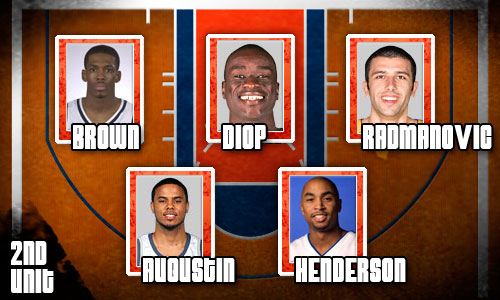 Last night’s draft fills the backup SG position and potentially the backup PF position as well depending on how quickly Derrick Brown develops.  As of this writing, the Bobcats have a total of ten players under contract and two draft selections, leaving two roster spots available.  I think it’s pretty safe to assume that both Alexis Ajinca and Derrick Brown will spend the first couple of months of the season in the D-League so that would leave room for another veteran PF and veteran 3rd PG to be added sometime during Free Agency or Training Camp.

Even if the ‘Cats don’t make any major moves between now and the start of the season, the team is probably looking like a 38-42 win squad in a tougher Eastern Conference.  If they can find a way to add an offensive Alpha Dog either through a trade (Monta Ellis) or through free agency (Iverson), add another 4-6 wins to that total.

We’ll have more offseason coverage starting next week during our “Free Agency Preview.”