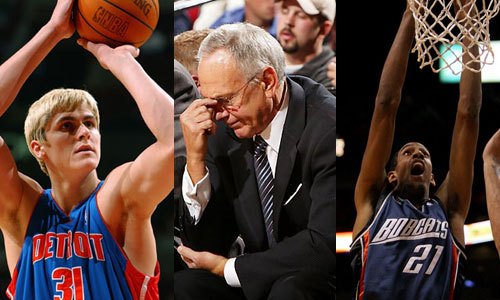 Training camp wraps up this week as the Bobcats prepare for their preseason opener against Cleveland on Tuesday and after a solid week of sound bites, blurbs and opinions here’s what we know so far:

1. Raymond Felton is a great teammate.

Everybody is saying it out loud now that Ray has officially resigned with the team but we knew this already.  The way in which Raymond handled his contract negotiation with the team this summer was the same way he handles himself on the court: the guy’s a class act.
Of course the hope is that he finds a way to impress as much with his game.  Hollinger said it in his ESPN.com team preview and for the time being at least it’s still true: Felton wouldn’t start for most of the teams in the League.
The Raymond | D.J. Augustin dynamic is the most intriguing storyline going into the season.

2. Alexis Ajinca is gonna shape up or ship out.

Larry Brown isn’t going to let Alexis off easy.  Unlike Darko Milicic, who was an inherited problem-child forced upon Brown by Joe Dumars, Ajinca was hand-picked by Larry as he sacrificed a future first-rounder to select Ajinca a year ago.  If it’s one thing that you DON’T do to Larry Brown, it’s tarnish his reputation.  Expect Larry to stay in ‘Lex’s face all preseason as Boris Diaw, Vlad Radmanovic and Tyson Chandler all miss time to injury.  We’re looking forward to seeing how Ajinca responds.  In the meantime, Alexis Ajinca is on Facebook.

You’ve heard about it for the past week, the Bobcats want to run the floor this year.  At least they’re conceding that it’s a cheap way to score points.  As Chandler said, getting the ball past half-court with twenty seconds on the shot clock gives you at least two or three looks from the set offense.  Unless they find a big-time scorer via trade soon, they’re gonna need every single one of those opportunities.

Not only is Gerald “well-spoken” but he’s also intelligent and has been well-coached.  Best of all, Henderson gives the team a super-athletic SG with a penchant for defense that the Bobcats haven’t seen since… Bernard Robinson?  Seriously, a case can be made that if the ‘Cats had Henderson late last season, they could’ve finished a lot stronger after Raja went down.  If Coach Brown and Assistant Coach Capel can work with Gerald on his jumper and free-throw shooting, we may be looking at an All-Rookie candidate.

This is the time of year when everybody looks good.  The guys have come into camp looking fit and relaxed.  Seeing the new faces mixed in with the old fixtures makes it easy to get excited about this young squad.  And why shouldn’t we?  Regardless of what you might read elsewhere, the Bobcats have never entered into a season with so much quality depth.  There’s at least ten players who could make any roster in the League.  Don’t laugh, this is actually a big deal for the Bobcats.  And depending on how their preseasons play out, Ajinca or Derrick Brown may add themselves to that list of quality guys.  How’s that for optimism?