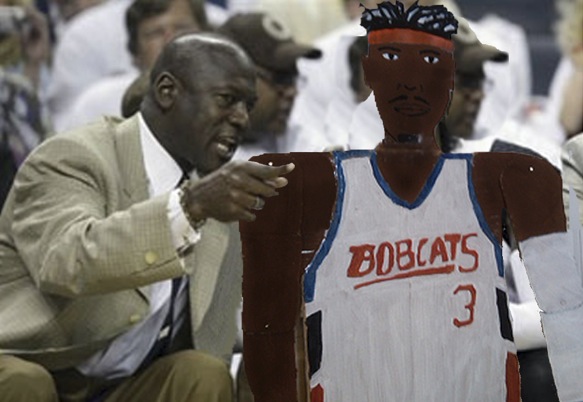 Hello there, loyal Bobcats Baseline readers and Charlotte Bobcats fans. If I may introduce myself, I am Cardboard Gerald, the newest contributor to this fantastic website. As you may have noticed, the website has undergone some intense changes (of which I am a big fan). Accompanying these innovations, the Baseline’s major contributors have decided to add me to the writing staff. I am excited to have this opportunity to write for one of the best Bobcats blogs out there. Originally I was supposed to be Senior Headline Writer and G-Force Cardboard Specialist but I guess the Baseline guys see some real talent in me.

In fact, I owe these guys a lot. They were the first to really notice me and my friend back when they wrote the article about us and our signs. Somehow it made it to Deadspin, where a multitude of readers apparently thought we were so awesome that they felt they had to make aggressive projective comments to make sure people didn’t think they were uncool.

Anyway, from there it kind of blew up to a minor degree, including a picture on the front page of the Charlotte Observer’s business section.

But considering I’ll be writing in this space on a regular basis, let me tell you about what I’m like and who I am.

I love this game. I have a serious love/hate relationship with Kurtis Blow’s “Basketball” because I don’t think it’s passionate enough.

I like to think I’m funny. I may or may not be, but that’s for you to decide. Regardless of your opinion, I’ll be using lots of satire, puns and my specialty, sarcasm.

I am a sneakerhead. I don’t even particularly like that name for sneaker enthusiasts but it’s the best name to describe the sub-culture. Feel free to chat me up on twitter (@CardboardGerald) or wherever about sneakers.

I love ultra-athletic forwards. Shawn Kemp in his Sonics years is my favorite player of all time. Gerald Wallace follows a similar mold and adds the perseverance and determination that wins over just about any basketball fan. To say I was a huge advocate for bringing in Tyrus Thomas last year would be an understatement. I love his style of play. Yes, it still needs some refining, but you can’t tell me he’s not headed in the right direction with the Bobcats.

I despise most rosterbation. Of course, like any NBA fan, I love the idea of some trades and get excited about some when I read rumors. However, when I’m reading through some comments on other blogs and I see stuff randomly shoehorned into the comment section like, “Hey, let’s get So-and-so! [Insert link to espn trade machine here],” I can’t stand it. Why? Most of it is stupid, thoughtless garbage and has a .000015439 percent chance of happening. The Trail Blazers are not going to ship us Greg Oden and his knee for Nazr Mohammed or DeSagana Diop. What, does Oden have Ebola? Okay, soapbox over.

Now that that’s out of the way, let’s take a look at the new guys on the Bobcats roster. This new group hasn’t exactly been lauded by the rest of the sports community, to say the least. So let’s take a look: there’s Shaun Livingston, Dominic McGuire, Eduardo Najera, Matt Carroll, Sherron Collins and Kwame Brown.

I am ecstatic to see Livingston on our team. Maybe I’m a sucker for the underdog story of a guy who fell from being a much-hyped kid coming straight out of high school to an injury prone journeyman but I think he can be a decent contributor to the Bobcats in his first year. At this point I would like to give Livingston a nickname. I shall from now on call him, “Knee Man.”

Knee Man brings some great things to the table for the Cats. Now, we all know that Larry Brown likes his players lean and athletic. Knee Man certainly follows in this mold. His size cannot go unmentioned. The man is 6 feet 7 inches tall – huge size advantage over most point guards. You’ll be sure to see a lineup with Knee Man at the point where everyone on the court for the Bobcats are 6 foot 7 or taller. Also, he has a terrific post game. If you don’t believe me, watch this highlights video from his previous season with the Wizards. If you do believe me, watch it anyway: it’s pretty good. He’s also an incredibly efficient passer. Last season about 30 percent of his possessions ended with an assist (hoopdata) which, to put it in comparison, was one percentage point higher than Raymond Felton’s.

However, Knee Man does have his shortcomings. The most concerning is his injury status. Should an injury come up (knock on wood), Sherron Collins would be our backup point guard. You hear that? All of Bobcats Nation just took a gulp. Another problem is that Knee Man has no outside shooting. But that’s not a big deal considering his above-average post game. Knee Man is pretty efficient scorer though. He doesn’t score a lot, though he had a great field goal percentage last year. He also doesn’t get to the line often and his defense will more than likely be a drop down from Felton although Larry Brown could improve that.

As a final note on Knee Man, don’t worry about his game last night against the Mavs. It looked a little disjointed, but that should be expected when you sit out the whole preseason and much of training camp. If he’s healthy, expect Knee Man to get more comfortable and to get back down around a 2:1 assist to turnover ratio.

I don’t really know what to say about this guy. Does anyone? If I may use some terminology from ol’ Donald Rumsfeld, he’s an ‘unknown unknown.’ He’s 6 foot 9 forward who Larry Brown says “can handle it, pass it, [and] he’s athletic.” Another one of LB’s projects, McGuire is raw potential. Of course, that’s just what Larry loves. McGuire describes himself as “do-it-all type” and a point-forward. “People will see I can pass the ball, I can bring the ball up-court. I’m very athletic, and I get to the rim and play defense” (Observer).

I haven’t been able to see him play because of a lack of preseason television broadcasts and an inability to pick up the radio station broadcasts. McGuire is out for about 5 more weeks with a stress fracture in his left shin.

The Charlotte Bobcats prodigal son returned this offseason in a trade with Dallas. I won’t go into much detail since his game is pretty simple and most of us know what he can do. He’s a shooter pure and simple. He’ll hustle his butt off but he’s not a great defender and he has trouble getting to the hoop, which isn’t good for a Larry Brown team. I have heard that he can dunk though!

Najera is a power forward who is probably best described as Mexican Don Draper trying to be Rasheed Wallace. But he wasn’t always like that. I don’t know what happened the summer of 2007 but Najera went from taking no more than 21 shots from downtown to 147 in 2007-08 alone. He combined for 24 three point attempts in the two season prior with nearly identical minutes. Someone please call Leonard Nimoy.

Anyway, Najera is known as pure hustle guy. That held true during the Hawks preseason game I attended. He got some garbage time and played hard. However, he also proceeded to jack long jump shots that he missed.

I believe Sherron Collins is a genuinely decent point guard. He’s short (5’11”) and has some weight issues right now but that’s nothing a documentary on Sean May can’t cure. I think he has some decent court vision and passing skills. He isn’t a terrible shooter either. The one major concern is his height and weight. He needs to lose weight to be able to stay with the ultra-quick point guards of the NBA.

Here it is: the moment we’ve all been waiting for: Kwame Brown. Like McGuire, I see him as a bit of an ‘unknown unknown.’ He’s a big body, which the ‘Cats need so at least he can get some rebounds. Of course his main problems, as they’ve been with him his whole NBA career, are small hands and poor footwork.

The one thing I can’t figure out is the reasoning behind this move. There were lots of other big bodies available when we signed Kwame. Why would Jordan want to okay a move to bring back his most notorious failure unless they saw something in him? Maybe I’m way, WAY off base here, but my Spidey Sense tingles concerning that roster move.

But of course, Kwame is still out with his severely sprained ankle for at least two more weeks.

So I was looking back through Deadspin from this week and saw this post on the Larry Brown hire, wherein Will takes note of the anemic Bobcats blogging community.  Will, we feel ya.  If there were better Bobcats blogs, maybe we wouldn’t have had to go and start our own.

And we’ve been plenty busy the past couple of weeks, with a two part breakdown of the current roster, part one of a series on this year’s draft, and a report from the Larry Brown press conference among various and sundry other posts.

And while Deadspin’s on the mind, some comments on Will’s adventure vs. Buzz Bissinger on Costas Now.  Will, thanks for taking the hit for the ‘blogosphere’.  I think your take is right on, especially the part about the origins of Bissinger’s particular brand of rage.  This situation can occur in any field, any area of life, really — when a new way of doing things emerges, the purveyors of the old way will fight to the death to defend their turf.  Sadly, the fight goes on even when there’s clearly plenty of turf to go around.

And in the end, it’s to be expected.  The emotions involved are all pretty basic and quite understandable.  But Will, if you continue to publicly take it on the chin for blogs everywhere, then I’ll start to worry.  Masochism isn’t quite so basic or understandable, and it’s certainly not healthy.