Another day, another winnable game lost — this time a wasted opportunity against a fellow Eastern Conference Playoff contender.  The Miami Heat do nothing special in this one except for playing a little less worse than the Bobcats and win the game 77-71, leapfrogging Charlotte in the standings to take over sixth place by a half game.

It’s the Little Things That Count

Dwayne Wade hardly dominated from a scoring perspective (6-18 from the field) but his fingerprints were all over the Heat’s win.  Wade registered 5 blocks including two MIND BLOWING rejections (one in waning seconds of the first half on Tyson Chandler and the other on Tyrus Thomas in the open court midway through the fourth quarter) and nine, count ’em nine assists to go along with five boards and fourteen points.  The very definition of a leader, DWADE did whatever he could to put the Heat in a position to win.

Bobcats shot 29.2% from the field and commit 5 TOs.  You just can’t win a game like this folks.  The final margin of victory would’ve been much greater for Miami had they not spotted the ‘Cats with an extra fourteen free throw attempts (20 compared to 34).  Stephen Jackson and Gerald Wallace take most of the blame here by going for a combined 8-33 from the field.  It wasn’t like the Heat were playing suffocating full court defense, the ‘Cats just weren’t hitting anything.  Fatigue could be an excuse as Charlotte just came off of Friday night’s OT loss at Atlanta but with the stakes this high this close to Playoff time, it’s just not an acceptable excuse.  The ‘Cats just weren’t moving the ball enough and were settling for too many one and done long jumpers.

Amazingly, as bad as the Bobcats played against the Heat they had the game tied 61 with just 8:59 to go in the 4th.  Miami was just closing out quarters strong and the 4th was no different — a 10-0 run put this baby to sleep.

At 35-34, the Bobcats are only a half game over .500 and just a half game up on Toronto for 7th place in the conference.  Fortunately the ‘Cats have the lowly Wizards twice this week sandwiching a home date against the T’Wolves.  If they don’t go 3-0 heading into the 29th home game against Toronto, then something is very, very wrong with this team.

Bobcats defeat the Heat 83-78 in Charlotte

With the hopes of the Bobcats’ first Playoff berth swinging just close enough to reach, the home team operated like a defensive machine to move ahead in the Eastern Conference standings. Time Warner Cable Arena saw a great turnout for a Tuesday night match up against two clubs positioning for the last (8th) spot for the post-season.

For much of the game, the crowd had little to cheer about. Charlotte allowed Miami to start hot with 30pts in the first quarter, and trailed by 9pts at the half. It was a lopsided start with Miami’s strong start and the Cats’ offensive struggles – poor free throw shooting, missed layups, and almost no perimeter scoring. Anyone watching had to question if the Bobcats had what it took to stand up for themselves and become the aggressors in a big game like this.

We Must Protect This House

For the Cats fanatics that check out the Open Practices or watch the inside videos on the Bobcats.com site, it’s common to see both Larry Brown and his consultant/assistant coach brother Herb Brown decked out in black Under Armour apparel. While the apparel line is marketed to the masses in chain stores, it’s hard to think that the physique of these aging men were what the product design team had intended for use. Well, Larry and Herb must have kept their Under Armour® compression shirts on under their suits last night. The half time talk to their big men probably started with Larry Brown ripping off his shirt and tie and fuming while wearing only an ultra tight, synthetic black “Tech Tee” with some rhythm stomping by Phil Ford. We can only imagine how Brown stepped up on a chair to look Tyrus Thomas in the face and declare “We Must Protect This House!”

The Bobcats opened the third period with a brief run that was immediately countered by Miami. Throughout the game, Dwayne Wade had his way in the lane with highlight reel style drives from right-to-left. He was hitting inside and out, with solid help from teammates Jermaine O’Neal and Michael Beasley (B Easy for those that believe he deserves any kind of pro nickname). Still, the Bobcats pushed forward in the third to enter the final period only trailing by 4 pts (Miami led 66– 62).

To push forward and close on Miami’s lead, Charlotte saw the return of the “Great DJ.” On key possessions to keep the Bobcats in the game, Augustin came up huge. The revived point guard was fouled on a successful three-pointer and hit the free throw for a complete 4 point play. He followed up with two consecutive, aggressive drives, drawing fouls against Miami. DJ hit all four of the free throws and pulled Charlotte within one point of the Heat’s lead. It seemed inevitable that the momentum would swing in favor of the home Bobcats at that point.

Larry Brown used a closing line up of Stephen Jackson, Gerald Wallace, Raymond Felton, Boris Diaw, and Tyrus Thomas. On paper, this is a group built to run. Yet, the Bobcats showed that this was Larry Brown’s dream of a defensive line squad – long, quick, and versatile athletes. Defense took center stage, as the two guys that the Bobcats count on for points (Wallace & Jackson) couldn’t score in the fourth. In the closing minutes, Raymond Felton hit a huge three-pointer to give the Cats their first lead and Miami challenged until Tyrus Thomas hit a beautiful baseline jumper to put the team ahead for good.

After the game, Dwayne Wade was reported to be very angry as a superstar competitor should be after such a tough loss. Still, he may have misplaced the blame for Miami’s loss when he told reporters “The ball didn’t go in the basket the same… I ain’t giving Charlotte no credit if that’s what you’re looking for.”

Where Was Wallace?
It was disappointing to see so little offense from Gerald Wallace for such a big game. His two missed dunks (from Felton lobs) made him look tired, but his stat line deserves a closer look. Only 8 Points – Really? Oh, but 17 Rebounds – Whoa!

Diaw Does Work
The average fan probably doesn’t get why Diaw is always on the court. His passing and awareness aren’t as impressive as throw-down slams or mega-blocks. Still, he played the first three quarters of Tuesday’s game like he wasn’t really fit for the NBA. Then in crunch time, he grabbed big rebounds, blocked a shot, found the open shooter, and drew fouls against the Heat. He really made up for his poor start.

O’Neal of Old
Jermaine O’Neal was hitting shots like it was 2005. It didn’t matter if Tyrus or Tyson had leaped at him with lanky arms in the air. Jermaine was nailing those baseline jumpers. The Bobcats did a good job of keeping him out of the paint in the second half, but he put an efficient offensive performance together with 19 pts.

Michael Beasley had a better stat line than Tyrus Thomas, but Charlotte’s young forward had such a bigger impact on the outcome of the game. It’s odd to say, but it looks like Beasley, in his second year, would be the more polished of the two. Tyrus Thomas probably has more “upside” if coached appropriately. 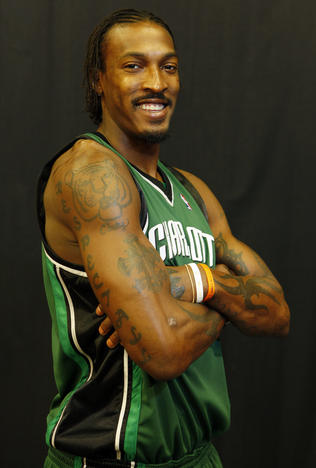