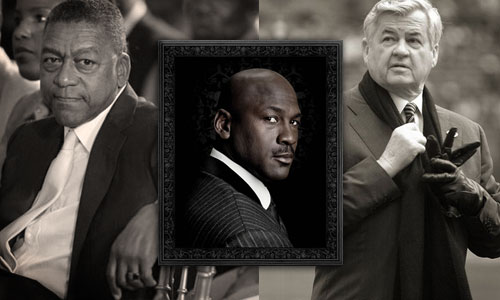 It’s official.  MJ came through in the clutch as he did time and time again during his playing days.  We all assumed that the George Postolos Group had the game wrapped up with just seconds to go on the clock but in a surprising turn of events, Jordan did to Postolos what he did to another geeky white guy 21 years ago – schooled him at the buzzer.  I’m not comparing Postolos to Craig Ehlo – the former Rockets president has a much more impressive resume – but we may have forgotten for a moment that we were dealing with the most competitive athlete in the history of professional sports.  MJ would NEVER have allowed himself to be outbid by a nerdy pencil pusher from Texas.  MJ posterized Postolos.

So Now What? (On the Court)

Massive changes would’ve occurred had the Postolos Group gained control the franchise.  Coach Larry Brown publicly announced earlier in the season that he’d walk away from the team (“preposterous!“) if MJ weren’t involved in the team’s ownership.  Friends of Mike featuring GM Rod Higgidy-Higgins and President Fred Whitfield would have certainly been cut loose.  There’s a great chance that Postolos would’ve rebuilt the roster as soon as this offseason, trading veterans for cap space and draft picks.

Now that Jordan is firmly in charge, it’s hard to imagine any major shift in philosophy from a basketball perspective.  Coach Brown will most likely honor his current contract and return next season.  The team will presumably retain its top veteran players and try to improve itself through trades and overlooked free agents during the summer.  Jordan has made most of the basketball decisions for the team since the summer of ’06 so we should know what to expect by now: Crappy Draft Picks (Morrison, Augustin), Quality Trades (Jackson, Diaw, Thomas), and So-So Free Agent Signings (Good: Gerald Wallace, Bad: Matt Carroll).

So Now What? (Off the Court)

This is the tricky part.  For the NBA to succeed in Charlotte, the team will need an owner who’s capable of conducting “Charlotte Business.”  You know, Good ‘ol Boy – How’s Yer Mama and Daddy – kind of business.  The kind that attracts big regional partnerships and sponsorships.  Very local, very social, very political, very congenial and (most importantly) very accessible.  I’m not so sure that MJ is any of these things quite yet.  Sure, he gets a partial-pass simply for being the greatest NBA player of all time and for being a local High School & Collegiate star but that only goes so far.  It reminds of another Nike superstar’s homecoming.

My father’s side of the family is Thai-Chinese and in the early 90s golf became the leisure sport of choice in Thailand thanks in large part due to the country’s sunny, tropical climate, low labor cost and (relatively) low real estate values.  Wealthy Japanese businessmen could fly into Bangkok, shoot a few rounds of golf, take in a few days at a luxury resort and be back in Osaka or Tokyo by Monday morning all for less money than playing a single round in The Land of the Rising Sun.  As a kid I saw my father’s wealthy Thai friends begin to emulate the Japanese golfers and then a few years later the middle class jumped in and all of a sudden Thailand was golf-crazy.
CUT TO: Around the turn of the millenium the greatest golfing talent the world has ever witnessed shows up on the scene and miraculously (seemingly by the grace of the bodhisatva Ben Hogan) he is half-Thai.  So Tiger Woods visits Bangkok and is fawned over by all and bestowed every honor available in the Siamese book and the people love him.  For about a year.  Maybe two.  Nowadays nobody even really talks about.  He’s just the dude who wears expensive Tag watches and bangs a bunch of chicks on the side.  So what.  All rich Thai guys do that.

Tiger missed out on becoming a national hero because he didn’t become part of the community.  He didn’t attempt to learn the language, the culture, teach or coach young Thai golfers — nothing.  He just showed up, picked up a huge check from the local golf promoters and said “sawadee – peace out.”

Michael Jordan is a global icon but is going to have to learn to do local.  It’s like one of those hackneyed Hollywood star vehicles in which the city folk have to “rough it” in the country – only to find that the small town life is what they were after all along.  Jordan is going to have to kiss babies and go to mega (and mini) churches and speak with local business groups and donate to local charities.  And unlike George Shinn, Jordan is going to have to be genuine about it.  The good news is that MJ has a model to follow just down the street from The Cable Box.  Jerry Richardson is another former athlete who has succeeded as a business entrepreneur and a professional sports owner.

The Ballad of Bob & Jerry

I walked into the Dilworth Harris Teeter just hours before the Bobcats made their ’06-’07 debut at the then unnamed Uptown Arena.  As I hit the snack aisle, Bob Johnson walks past.  I quickly turn to offer a few words of encouragement but before I can open my mouth he’s bolted off to the frozen foods.  This was strange because A.) We Clearly made Eye Contact and B.) I was dressed in FULL BOBCATS gear that included an authentic Bobcats Warmup, Bobcats Beanie and Primoz Brezec jersey.  Keep in mind that this was during a time in which most Charlotteans didn’t even know what the Bobcats were and couldn’t tell Brevin Knight apart from Urkle.
By chance, I walked past him two more times and finally ended up standing behind him at the checkout line.  The friendly HT checkout person tried chatting him up southern-style.  “Bob Johnson!  How are you doing sir!  Got a big game tonight.  Wish you the best!”  Johnson acknowledged her with a grunt and an uncomfortable smile, shoved some money in the cashier’s hand and then made a B-Line for the chauffuered Mercedes getaway car screeching to a halt immediately to the left of those vile, bourgeois tinted automatic exit doors.  The man seemed less sour than he seemed borderline autistic.

Contrast this to a chance encounter I had with Mr. Richardson outside of a Joseph A. Bank in South Charlotte.  Mr. Richardson rose gently from the driver’s seat of a vintage luxury sedan, pulled a couple of plastic covered suits from the back seat and limped into the shop.  I caught him on the sidewalk and quickly thanked him for his contribution to the city.  Richardson thanked me in return for supporting the team and continued along his way.  That’s all it took.  I care about basketball around two hundred times more than I care about football but I’ll always follow the Panthers because the owner is a class act.  Stories like these abound.  In an opinionated age in which most sports owners are viewed as an obstacle between fan and team success, Jerry Richardson is beloved.