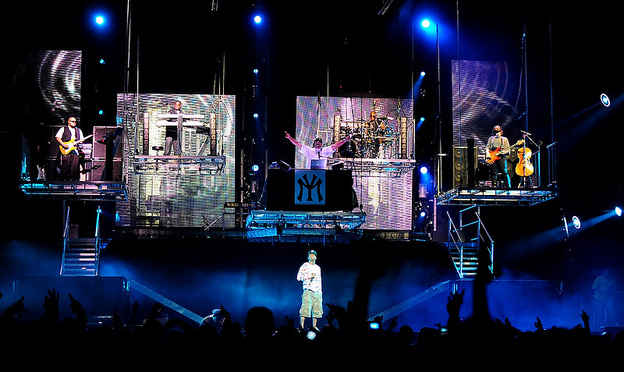 1.  So I caught a really good show at the Cable Box last night — only it wasn’t the Bobcats, who lost badly on the road in Milwaukee 103-75.  AP story here, box score here, PopcornMachine.net game flow here.  Bobcats drop to 11-22; Milwaukee improves to 16-18.

2.  The show I saw at the Arena last night was Lil’ Wayne’s I Am Music Tour.  It was fun, but note that I said it was a “really good” show — not great.  I missed the first two opening acts and got to my seat just as Keyshia Cole took the stage.  Unfortunately, Cole is not the R&B diva responsible for the song “Single Ladies“, which would pretty much be the only chick R&B song that I enjoy hearing these days.

T-Pain was up next — he did a fun set with a circus theme, complete with mimes/clowns, fire dancers, contortionists, and little people/midgets/whatever is PC these days.  The obvious problem with a T-Pain set is that all of his recognizable songs are duets at best, or feature him just singing the hook at worst.  So he ran through all those verses and hooks, danced around and goofed off, and that was that.  Everyone seemed to enjoy.

Lil’ Wayne, the artist of the 2008 by any criteria, was up next.  It was a solid show that, as the Observer review pointed out, lacked clear direction.  There were some cool moments: T-Pain came back out on a Segway (a la Gob Bluth) for “Got Money” and stuck around for a few more minutes, Wayne did his verse from the “They Know” remix (my favorite Wayne verse), and “Ms. Officer” and “A Milli” were big crowd pleasers.

But again, it was a scattered effort.  While Weezy himself has a strong, clear identity as an artist (“The Greatest Rapper Alive” who has begun to flirt with being an all-out rock star), his set lacked any such identity.  There was no theme, no point to all the action.   Some really good parts were in the mix, but they didn’t sum up to anything unified, consistent, or great.

Sound like a certain basketball team you know of?

3.  Back to the Bobcats; there was no local TV for this game, and the Broadband NBA League Pass is giving our international correspondent some issues (insisting on showing him the ATL/NJ game when clicking the CLT/MIL link), so we don’t have any first-hand observations for you.

Looks like a bad loss, though.  Michael Redd came out and jumped all over the Cats, going for 18 in the opening quarter and 10 more in the second (he had 3 more in the third for a total of 31 before sitting the entire fourth).  My first thought on seeing those numbers was that, with Raja Bell out with a strained groin again, Redd had toasted Matt Carroll.  But in looking at the game flow, Redd did it to everyone: Carroll, Shannon Brown and Felton.

And a quick look at the video highlights on ESPN.com shows that Redd was mostly hitting open jumpers after penetration & kickouts from his teammates.  Rotations looked slow in those highlights, and Redd was in the zone.

4.  Has DJ Augustin hit the rookie wall already?  It’s about that time, as he has logged 30+ games.  Since his 29-point dismantling of Derrick Rose and the Bulls back on December 16, Augustin has had 7 straight lackluster games, only going for double figures once during that stretch.

5.  That’s all for now.  The Bobcats are back in town tonight, hosting the Bucks for one of these strange same team back-to-backs that the schedulers like to give us.  7:00 ET at the Cable Box — I’ll be there and will be back with some post-game observations later tonight.