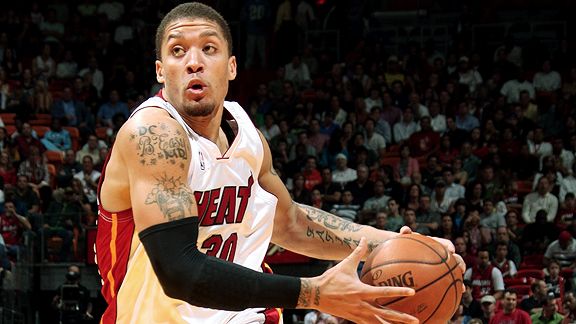 According ESPN.com’ s Chad Ford and Mark Stein, the Bobcats are working on a four team deal that would net them former second overall selection Michael Beasley.  The deal would reportedly send out Tyson Chandler’s expiring to Houston, bring the Rocket’s Jared Jeffries and the Heat’s Beasley to Charlotte while allowing the Toronto Raptors and Heat conduct a sign & trade for Chris Bosh, handing Toronto a massive trade exception in return.

The Houston Chronicle’s Jonathan Feigen started the rumor by tweeting that three of the four teams are in with the Raps wavering (read: “we want something else besides cap space in return”).

If the trade goes through, it would be a massive upgrade in talent for the Bobcats who’ve never had a frontcourt scoring presence in their six seasons of existence.  Beasley would instantly upgrade a putrid offense that ranked dead last in the League last season in points per game.

Mark Stein is now reporting that Beasley will be shipped off to to the Timberwolves for a second round pick.  Wolves will absorb Beasley’s contract into their cap space and send a second rounder back to Miami.  Also the deal will reportedly offer a first round pick swap in a future draft.

ANALYSIS: Tough loss for the Bobcats who could have gotten Beasley for less than what they paid for Tyrus Thomas back in February.  Beasley has a higher upside and a smaller contract and wouldn’t have cost them a first round pick outright.  Furthermore, the Bobcats might be painted into a corner with Tyrus as a team flush with cap space (the rumor mill suggests New Jersey) will likely offer a front-loaded contract to him.  Hope MJ is prepared to pay the luxury tax because if not, he’ll have thrown away a first round pick for a three month rental of Tyrus Thomas.