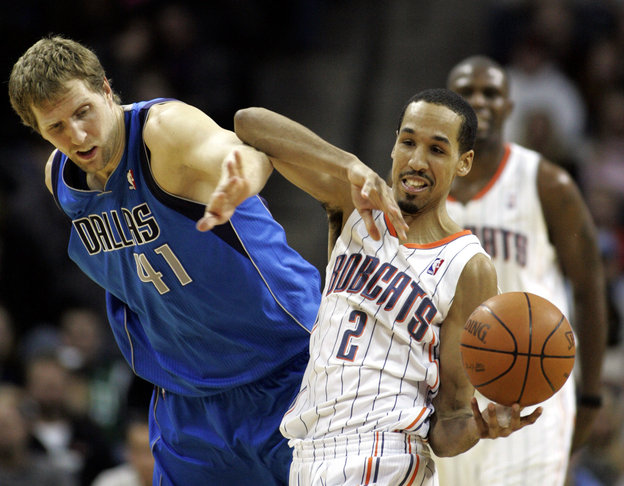 Another game against Dallas, another loss.

The Bobcats moved to 0-14 all-time against the Dallas Mavericks with tonight’s 101-92 loss.

The Bobcats, on the tail end of a back-to-back, were stuck with a consistent 12-point deficit (give or take, obviously) for most of the game as their offense only managed to shoot 37.1% from the field while the Mavs shot 46.5%. Dirk Nowitzki headed the Bobcat-Killing Committee once again, with 25 points, including some clutch shots in the fourth quarter. The quintessential Bobcats-Mavs game, if you will.

A slow start for the Bobcats was quelled by an unusual 11-point scoring flash by Boris Diaw. However, after the Mavs compensated for his offensive outbreak, the Bobcats couldn’t find anyone to step up for a while. D.J. Augustin and Stephen Jackson’s shots were off early and the Bobcats fell to a nine-point deficit after the first quarter.

Luckily in the second quarter, Shaun Livingston came alive and had 10 points on six shots. Unfortunately, it wasn’t enough to help cut into Dallas’ lead as the rest of the Bobcats were wholly ineffective. And that especially extends to the defense, which was atrocious. I can’t even remember how many dunks Tyson Chandler had in the first half (eleventy-jillion?). Augustin could shoulder much of the blame as he couldn’t defend Jose Juan Barea because of Barea’s quick first step. And once Barea, or another Dallas player, got to the interior, the defense again collapsed. The Bobcats weren’t talking to each other, which is an incredibly important part of defensive cohesiveness. Furthermore, Tyson Chandler (in his first game back in Charlotte since being traded) dominated from a rebounding perspective in the first half, grabbing 11 rebounds in the first half alone. Kwame Brown was simply not strong or quick enough to rebound against Chandler. And to make things seem worse, I found that Jackson seemed disinterested.

The third quarter was more of the same for the most part. Barea and Dirk were still hitting their shots. Tyson Chandler was slowed down though, en route to only four second-half rebounds. D.J. Augustin did make an encouraging turnaround after hitting a three-pointer which seemed to instill some confidence in him. He ran with it, completing a three-point play on the next offensive possession and pulling the Bobcats back into the game, somehow. On the other side of things, Stack Jack was doing the opposite. In the third quarter, Jackson was getting quite fussy and even drew a technical foul. I was fairly confident he would get tossed by the end of the night (he didn’t). The third quarter ended with the Bobcats down 16. As Dr. E noted, it just felt like the Bobcats weren’t in it.

In a pleasing turn of events (especially to those who paid to watch this game in person), the fourth quarter was much more entertaining and competitive. Playing much better defense and utilizing better ball movement on offense, the Bobcats cut the Mavs’ lead to six with a minute left. It could have been even closer than that, but the Mavericks had seven offensive rebounds between 10:22 and 5:01 left in the fourth quarter. And even though some of those did not lead to any points for the Mavs, it took time off the clock from the Bobcats’ comeback effort. And in the end, the Bobcats couldn’t muster the energy to complete a comeback, losing by nine.

Plays of the Night

There was also a very nice Shaun Livingston to Gerald Wallace alley oop that you can find here.

The Charlotte Bobcats fell to the Dallas Mavericks at the Cable Box 89-84, falling to 0-12 versus Dirk and Co. all time.  AP recap here, box score here.  After fleetingly moving up into the 8th spot when Miami lost back-to-back games over the weekend, the Cats have fallen back to 9th place in the East at 28-30 overall.

The Cats came out strong in this one, building an early 20-9 lead midway through the first quarter.  Another spurt to end the second had the Cats up 53-43 at the half.  Tyrus Thomas had a great first half, keeping Dirk quiet on the defensive end and pacing the Cats with 12 points.

But the second half was a different story, as the Cats could only muster 31 points the rest of the way and were overtaken midway through the fourth quarter.  The offense looked like a hot mess.

Here’s what you need to know: The Cats had more turnovers (11) in the second half than field goals (9).  Tyrus Thomas led the Cats with 16 FGA.  Gerald Wallace had just 8, with only 1 (a 20 foot jumper) in the deciding fourth quarter.  Stephen Jackson finished with 20 points on 6-14 FG, but spent more time fussing at referees and turning the ball over (6 times) than scoring.  There were three airballs in the fourth quarter, plus a monumental brick by Boris on a three attempt.

Meanwhile, despite decent defensive efforts from Boris Diaw and Tyrus Thomas, Dirk Nowitzki heated up and finished with 27 on 12-23 FG to put the Cats away.  Caron Butler went for 22 on 10-16 FG, while Jason Terry contributed 20 on 8-17 FG off the bench.  The Mavericks are now the hottest team in the league with 8 wins in a row.

Why did the Cats fade so badly after a solid first half?  You could argue that the Cats don’t have a go-to guy like Dirk, who can get buckets and draw double-teams.  You’d be partially right, but in Stephen Jackson we have the closest thing we’ve ever had to that guy, and he’s been pretty good this season.

You could argue that the pressure of facing the elite Mavericks, knowing that they were winless against them all-time, got to the Cats and caused some tightness.  I couldn’t prove you wrong.  It’s certainly happened before.

But tonight it appeared that the main factor was fatigue.  I tweeted halfway through the fourth quarter that the Bobcats looked to have “run out of gas” and I was right.  You could just feel the exhaustion and sense that the Mavs had more in the tank.  (Sad, since they were coming off a late back-to-back AND are more veteran-heavy than the Cats are.)

We’ve been worried about it all season.  Gerald Wallace leads the league at 42.4 minutes per game, while Stephen Jackson is sixth at 39.5.  Now look at the the rest of the guys at the top of that list (Monta Ellis, Rudy Gay, Kevin Durant, etc.) — all younger.  Crash and Jack have too many miles on them to be playing 40+ minutes a game regularly, and I fear that we’re starting to see all that court time take a toll.