The Charlotte Bobcats notched their fifth straight win by defeating the Los Angeles Clippers 106-98 at the Cable Box on Friday night.  Stephen Jackson paced the Bobcats with 24 points (9-21 FG) and 6 assists.  The Clippers actually outshot the Cats 57.5% to 54.2%, but committed 23 turnovers and were outrebounded by the Cats 36-30.

The Cats built a 61-45 lead by halftime, then coasted through the second half, withstanding a half-hearted fourth quarter push by the rag-tag, Eric Gordon-less Clippers.  With the win, the Cats move to 33-31 overall, 6th place in the East, and ensured their best ever home record with their 24th victory at the Cable Box.

But it was a play right at the end of the first half that will be causing Cats fans consternation in the coming days.

With the Cats already on a 6-0 run and causing the Clippers all sorts of problems closing out the first half, Gerald Wallace poked the ball away from Baron Davis.  Wallace had been dominant in the first half, with 17 points (7-8 FG), 6 rebounds and 4 steals.  The loose ball went to Stephen Jackson, who flipped it ahead to Wallace, already at full speed.  Gerald flew down the court with just seconds left on the clock, a step or two ahead of Baron.  But as Gerald took off and glided towards the basket, Baron caught up enough to make some contact.

Most of the contact he made was basically a cheap push in Gerald’s lower back with his left hand.  Gerald was fully extended and essentially defenseless, and was sent careening towards the basket support in a manner that we’ve certainly seen in the past, but not this season.  Gerald landed awkwardly on his left ankle and immediately grabbed for it.

Larry Brown soon made his way over as Gerald rolled around on the floor.  The rest of the bench was up and visibly upset. Raymond Felton fretted with both hands on his head; assistant coach Phil Ford angrily slapped some rolled up papers against his other hand.  Angry boos rained down; Baron’s perfunctory concern for Gerald and the fact that a flagrant foul was called was enough to prevent a minor incident.

Gerald was eventually able to get up and hit one of the two free throws to give the Cats 61-45 halftime lead, but headed straight back to the locker room with the trainers after that.  He reportedly had negative x-rays on the ankle, but did not return to the bench (or the game) for the second half.

With the Bulls having fallen off a cliff without Joakim Noah (and now without Luol Deng and Derrick Rose), there’s no longer much danger of the Cats finishing out of the playoff race.  But we can hardly afford to be without Gerald for too long as we try to jockey for the 6th seed and the right to play Boston (or possibly Atlanta) in the first round.  7th or 8th place buys us a matchup with the Magic or Cavs, respectively.  This season’s victories over the Cavs notwithstanding, both of those series would probably result in the Bobcats getting swept or nearly swept. 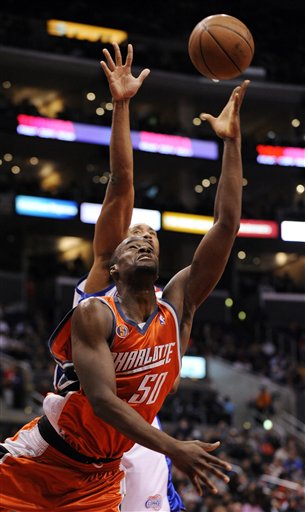 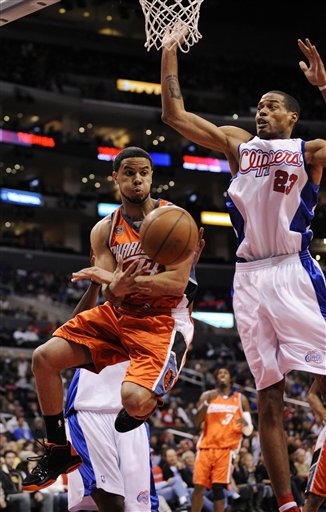