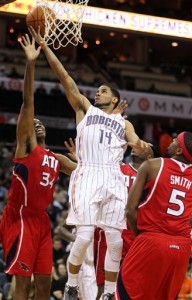 The Charlotte Bobcats defeated the Atlanta Hawks 109-100 at the Cable Box on Tuesday night.  The win ensures that the Cats will finish no worse than .500 for the season; however, the Cats remained mired in the 7th spot in the East as the Bogut-less Bucks also won again.

The Hawks started Jeff Teague and Mo Evans in place of Mike Bibby (toe) and Joe Johnson (thumb) and did not get off to a good start.  The Bobcats throttled them 34-14 in the opening quarter, with Gerald Wallace slashing to the basket on Evans at will.  Wallace finished with a game-high 28 points (10-18 FG, 8-8 FT) and 6 rebounds.

The Cats continued to shoot well (51% on the game) and went into halftime with a 23-point lead.  Things were looking good for banged up stars of the Bobcats to possibly have an easy night.  Gerald Wallace played the game with some sort of mini-shoulder pad thing on his left shoulder, while Stephen Jackson wore a wrap around his left hamstring that he readjusted frequently throughout the night.

But alas, it’s the NBA and everyone makes a run.  Atlanta was able to chip away at the Cats lead in the third quarter behind Jamal Crawford and Mo Evans.  The persistent Hawks were eventually able to cut the Bobcats lead to 9 points with 8 minutes left, forcing Larry Brown to keep the starters in for the bulk of the fourth quarter.

The move worked, as the Hawks were never able to get the lead below 9.  After Raymond Felton weaved through the Hawks backcourt pressure to get a driving layup to put the Cats up by 13 with two minutes left, the Hawks conceded by subbing Randolph Morris and Mario West into the game.  But with 3 more games remaining this week and an outside chance of overtaking the Bucks for the 6th spot, it would have been ideal night to have been able to give the starters some rest in the fourth quarter.