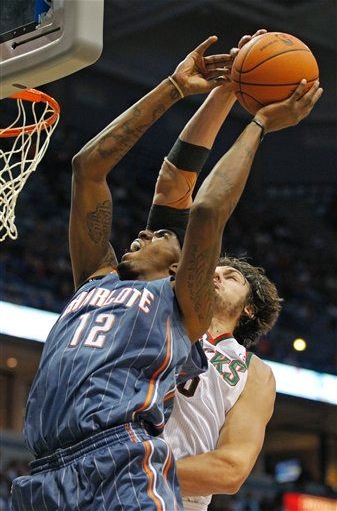 The Charlotte Bobcats scored a tough overtime win over the Milwaukee Bucks, 87-86 on Friday night at the Cable Box.  The teams exchanged defensive blows all night amidst a playoff atmosphere, with Stephen Jackson (32 points) supplying the offense for the Cats.

Though the ruggedness of the game had a distinct mid-90s feel (generally regarded as an ugly period of basketball for the NBA), this was one of the most fun games I’ve attended in the past two seasons. Bring on more playoff basketball.

This one was intense right from the get-go, and tight throughout.  The biggest lead either team held was 7, by the Bucks halfway though the second quarter.  That was just after Larry Brown was ejected after arguing about a non-call, inciting a brief “Lar-ry, Lar-ry, Lar-ry” chant from the crowd.  Assistant Dave Hanners assumed the lead role the rest of the way.

The Bobcats appeared to be primed for victory late in regulation after Jack hit a monster three with just over two minutes left to put the Cats up 76-73.  The Bobcats maintained that three point buffer, only to see John Salmons bury a contested three to tie it at 80 with 10 seconds left.

The Cats called timeout to set up a gamewinner, but Raymond Felton only managed a contested jumper that was off the mark.

The slugfest continued in overtime until Stephen Jackson stepped back and drained a deep three (again) with under a minute left to put the Cats up three 87-84.  After Salmons responded with a bucket to cut the Cats lead to one, disaster nearly struck.

With the shot clock running down and about 20 seconds left in the game, Jack was working against Bucks defensive bulldog Luc Mbah a Moute.  Mbah a Moute poked the ball away and a mad scramble ensued.  Jack was able to get a hand on it first and drew a foul on Mbah a Moute in the process — ball could’ve bounced the other way just as easily.

The Cats weren’t in the bonus, so had to inbound the ball.  The Bucks decided not to foul with a four-second shot clock/game clock differential.  Raymond worked himself free for another chance at a game-clinching shot and missed again, but Tyson Chandler was able to get a hand on the rebound and tip it back out to Felton, who grabbed it as time expired to seal the win.

It was an appropriate finish as the Cats only shot 37.5% on the game — they made up for it at the free throw line, making 20 free throws to the Bucks 10.  It was as if both teams, the officials and the fans all agreed early on that this was going to be physical, intense playoff-style basketball.  And the Cats were up to the challenge.

This game was not televised locally, and the news that Michael Jordan will become the controlling owner of the team is overshadowing, so our comments on the game will be pithy.

Needless to say, after dropping the first three games of this road trip, 7 of the last 10 overall and falling out of the eighth spot in the East, this was nearly a must-win.  On top of all that, we have the Mavs, Celtics and Lakers this coming week.

As of Saturday, the Cats are still on the outside looking in regarding the playoffs, a half game back of 8th place Miami.  Both the Bulls (currently 6th) and Bucks (currently 7th) are have won 8 of their last 10 to push the Cats back out.  Basically, every game is huge the rest of the way, and the Cats should be happy to have a relatively benign and home-heavy schedule down the stretch.

The Cats will take the weekend off to rest up, while continuing to work Tyrus Thomas and Theo Ratliff in the mix.  Hopefully, we can get Nazr back to bolster the frontline.  Next game is Monday night, 7 PM ET, hosting Dirk and the Mavs at the Cable Box.

A night after a rousing victory over the Cavaliers, the Bobcats fell on the road to the Milwaukee Bucks 93-88 on Saturday.  AP recap here, box score here.  The Cats have fallen back to .500 at 27-27.

Like they frequently do on the road, the Cats came out flat, falling behind by 10 early and 15 by half.  Behind a balanced attack of Brandon Jennings, Andrew Bogut and John Salmons, the Bucks eventually extended their lead to 20 early in the third quarter.  Raymond Felton and DJ Augustin both had trouble keeping the lightning-fast Jennings in front of them, while failing to make Jennings play much defense by shooting a combined 3-16 FG.

Midway through the third quarter the Bobcats began chipping away behind Stephen Jackson, who would finish with a game-high 35 points on 14-25 FG.  Tyrus Thomas was again a force inside, finishing with 11 rebounds and 4 blocks.

The Cats would eventually cut the Bucks lead down to three at 86-83 with 2:20 left on a Jackson layup, but couldn’t get any closer.  After a Carlos Delfino free throw increased the Bucks lead to four, Steven Jackson committed a completely unforced turnover to end the Cats comeback bid.  Jackson simply lost his dribble, giving John Salmons the easiest steal he’s ever had.  Worse yet, Jack grabbed Salmons for a clear path foul, which really ended things.

The Charlotte Bobcats get another solid win on the home floor Monday night, 94-84 over the struggling Milwaukee Bucks.  AP recap here, box score here.  The Cats are now 11-4 at home; but their dismal 1-13 road record has them at just 12-17 overall.  The Bucks have now lost 14 out of their last 18 to drop to a matching 12-17.

The Cats took control in the second quarter with excellent defense and cruised to a 22 point halftime lead.  Scott Skiles, unhappy with the Bucks’ first half performance, benched starters Andrew Bogut and Michael Redd in the second half.  Redd, in particular, looked awful.  I have to wonder if he’s done.  In looking at his game log, I’m surprised to see he went for 32 points against the Wiz last week — he looks like he’d have trouble mustering double digits.

The Bucks made a bit of a run in the fourth quarter but never seriously threatened.  The Cats outshot and outrebounded the Bucks by just a bit, and kept their turnovers a bit lower than the season average.

Gana Diop deserves special mention.  With Tyson Chandler out, Nazr Mohammed deservedly got the starting nod again.  However, Nazr had to sit early with two fouls and Gana was pressed into early and extensive action.  Gana acquitted himself well with 7 points on 3-4 FG with 3 rebounds and a block in 12 minutes.  He even hit a free throw.  Of course, he airballed another — that’s our Gana!