Chris Webber rates his 5.5 Greatest Hornets players of all time!

This is incredible.  Old-school Charlotte NBA fans are gonna love these highlights.

Who knew C-Webb was gonna be such a great TV personality!

What about the Baseline Readers out there?  Who’s your All Time Charlotte Starting 5 (plus a 6th man)???!!! 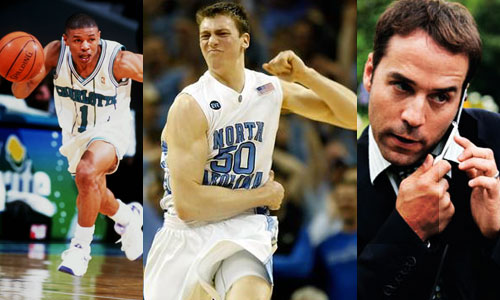 We Should All Hope That Ford’s Theory Works

Many of you non-“ESPN Insiders” out there may have missed Chad Ford’s recent pump-and-dump Combine Stock update (Insider only) of Tyler Hansbrough.

In his update you’ll find such gems as:

Hansbrough measured a legit 6-foot-8¼ in socks and 6-9½ in shoes. He also had a surprising 6-11½ wingspan and a standing reach of 8-10 — one inch better than Blake Griffin.

Professor Ford does his best with nuggets like these to sell us on the theory that since “Psycho T” has a similar wingspan, height and standing jump as many other established NBA players and top prospects, he will no doubt be equally as good.

If Ford’s Theory proves to be true, then this is really great news for the rest of us.
For instance:

1. My wife is 5’3″, which is the same height as Muggsy Bogues.  So there’s a good chance that she’ll be electrifying NBA crowds with a stellar 2:1 assist to turnover ratio for over 10 NBA seasons.  GREAT!  No more work for me!  I’ll quit and become her agent!  We’ll be like the Christies!!!

2. Speaking of agents, my buddy Greg is Jewish with similar male pattern baldness as Jeremy Piven.  He’s looking for a career change.  He’s the next Ari Gold!  Woo-Hoo!

3. My in-laws have a minivan that runs on fossil fuels which is the same fossil fuel used to power Formula 1 and Nascar vehicles.  YEE-HAW!  See you suckers at Le Mans!

The possibilities are endless.  I just want to extend Professor Ford thanks in advance if and when this new theory proves correct.  You’re the best Chad!

Oh, and btw, I think I speak for everyone when I say that EVERY BOBCATS FAN’S WORST CASE SCENARIO is:

With the 12th selection in the 2009 NBA draft, the Charlotte Bobcats select…Tyler Hansbrough, the University of North Carolina.