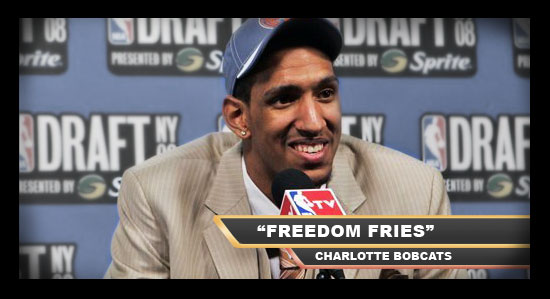 There will be plenty of message board rants going around about how a list of probable talents were available when the Charlotte Bobcats selected the 20th pick of the draft. Most will make noise about how the team overlooked some of the more well-known players available (Chalmers / Jordan ). NBA execs don’t really listen to those rants. NBA execs don’t seem to listen to the supposed “draft experts”. NBA execs usually do what they want to do and the fans are lucky if everyone is on the same page.

The Bobcats pulled out a strange book and shared an odd passage for us on Thursday night. Had any of the experts predicted that Larry Brown or Jordan were all that interested in a foreign Center? Did any local media cover how much the Bobcats needed another “Ryan Hollins-like” big man? Were any of the fans begging for the Bobcats to trade for a late first-round pick to nab up a guy that averages 5 pts in the French league?

The selection of Alexis Ajinca was strange. Still, one must commend him for appearing at the draft and walking across the stage. His workout must have really impressed Larry Brown. Otherwise, he might have been a backup plan with Roy Hibbert already off of the board. As no one has seen Ajinca’s game, the excitement lies in the 7′, 220lb, 20 yr old potential.