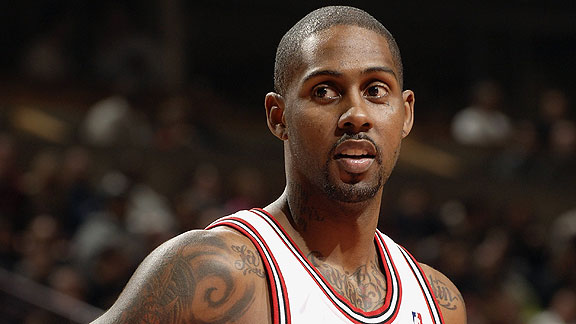 Adam Fleischer of SLAM Magazine broke the news last night on Twitter that Larry Hughes will be signing with the Bobcats in the coming days.  This morning, Rick Bonnell is confirming the news, presumably from a team source.

Hughes is a 12-year NBA journeyman who experienced the best stretch of his career in the early-to-mid 2000s when he was a major cog for the Washington Wizards.  In 2002-03, a budding Hughes was signed by Michael Jordan to relieve His Airness and his balky knees.  That season didn’t go so well, but after Jordan was fired in the offseason, Hughes came back to post the best marks of his career in 2003-04.

He, Antawn Jamison and Gilbert Arenas combined to become the highest scoring trio in the league that year and led the Wizards to a 45-37 regular season record and a first round playoff victory over the Chicago Bulls.  Hughes averaged 22 points, 6 rebounds and nearly 3 steals a game and was named to the All-Star Team and the All-Defensive 1st Team that year.

That performance bought Hughes a huge free-agent contract in the 2005 offseason, as he was signed by the Cavs to a 5-year, $70 million dollar deal to be LeBron James’ first big sidekick.  Unfortunately, injuries and an overall declining game contributed to things “just not working out” in Cleveland.  This stint resulted in a Cavs fan creating the blog Hey Larry Hughes, Please Stop Taking So Many Bad Shots, which amazingly was still being updated with Larry Hughes news as recently as last month.

Hughes’ minutes and scoring average have generally fallen every year since then, as he has bounced around between the Knicks and Bulls.

Hughes has had two career lowlights in the past few seasons.  The first came almost exactly two years ago, when Hughes, then a Bull, made comments to Cavs beatwriter Mark Windhorst that his goal as an NBA player was not necessarily to win, or win a championship.  Instead, Hughes indicated that he could be just as happy collecting his check and playing the way he preferred, which presumably was to be running the wing and jacking up a lot of shots — even if that didn’t translate to winning.

The comments essentially amounted to sacrelige and Hughes’ reputation has suffered greatly since then.  It hasn’t helped that his production has continued to decline, either.

Hughes second lowlight came earlier this season when he suffered the ignominy of riding the bench for the New York Knicks.  Now we may have to look back upon this from a slightly different angle as Mike D’Antoni’s wunderkind “7 seconds or less” reputation as a coach is increasingly taking a beating as time goes on, but the fact remains that Hughes was essentially deemed useless by a 22-44 team this year.

On February 18th, the Knicks sent Larry Hughes to the Kings as part of the Tracy McGrady trade.  At the time, Hughes was out with a broken finger, but was expected to be waived or bought out regardless.  On February 23rd, he was indeed waived, which freed him up to sign with any team down the stretch once his finger healed.  Which brings us to this weekend…

Life As A Bobcat

Hughes is a 6’4 or 5″ combo guard who will essentially fill Flip Murray’s role.  This shouldn’t come as much of a surprise, as Larry Brown is currently without his beloved “veteran third point guard” and couldn’t have been expected to go on much longer without such a trope/security blanket.

Beyond the fact that Michael Jordan brought Larry Hughes to the Washington Wizards back in 2002, Hughes has even deeper connections to the Bobcats — Larry Brown drafted and coached him to start his career in Philadelphia, and per Wikipedia, Hughes is a childhood friend of rapper and Bobcats minority owner (still?) Nelly.

Whether Hughes has anything left in the tank, or whether he’s willing to sublimate his ego enough to play spot minutes as a combo guard (sorta the role he bristled at in Cleveland) remains to be seen.

Perhaps most concerning for Bobcats fans is that the departure of Flip Murray has been associated with the rejuvenation of DJ Augustin and the emergence of rookie Gerald Henderson (maybe “emergence” is a bit strong, I know).  If Hughes’ presence results in any regression for these two young players, Bobcats fans will certainly be up in arms.

More likely than not, though, Hughes simply represents a cheap “insurance” option for the Cats, should Felton or Augustin suffer an injury down the stretch, or Henderson prove to be completely unprepared for even short stints of playing time in a pressure-filled playoff game.  Here’s hoping we don’t have to rely too much on him, though.