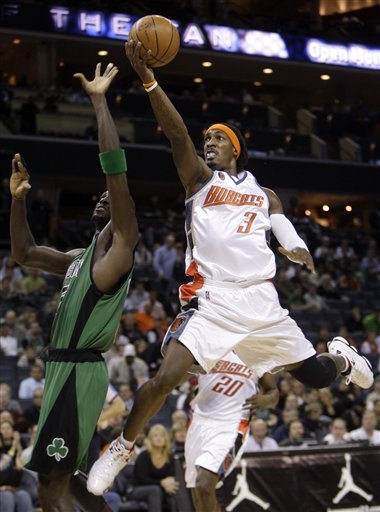 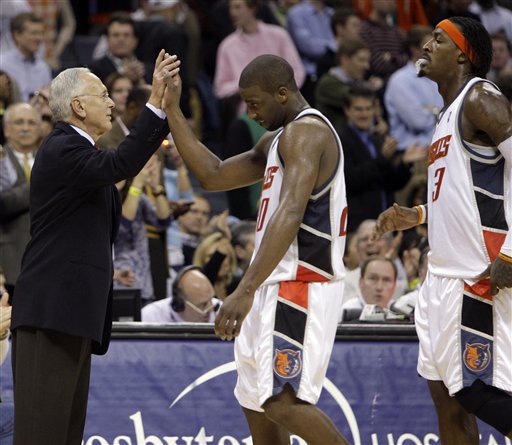 2.  This was easily the biggest win and the most fun game to attend of the season so far.  The arena was not quite as full as it had been the first time the Celtics came to town a few weeks back, but it was still a pretty good crowd.  As always, there were lots of Boston fans in the house; some diehards (like the old guy with a killer green satin Celtics jacket behind me), but also a ton of bandwagon jumpers (replete with gleaming new Garnett jerseys).

The Bobcats played a great first quarter, maintained a small lead for the rest of the first half, eventually relinquished it late in the third, then made big play after big play in the fourth to force the overtime.  The Celtics were out of gas in the overtime period, and DJ Augustin hit a big three and a handful of free throws to seal the deal.

3.  Raymond Felton is front and center in a lot of the highlights and stories, and rightfully so.  He played his heart out, leading the team with 25 points (9-17 FG, 6-8 FT), 3 rebounds, 8 assists and 2 steals.  He also hit two monster shots in the fourth quarter: the first was a three-pointer with the game tied at 85 with 6:39 left, the second was an extremely difficult Iverson-esque baseline fadeaway to give the Cats a 1 point lead with 38 seconds left.

But Raymond also made some bad plays down the stretch that made those big shots so necessary.  Amongst his seven turnovers on the night were two particularly bad passes with under 3 minutes left that prematurely ended crucial possessions.  And, after getting fouled with 20 seconds left, the Cats up by one, he hit only one of two free throws.  Pierce (of course) responded by backing down Augustin and coolly draining a turn-around jumper to tie the game with three seconds left.  Then, despite getting a good look from straight on, Felton missed his chance to be the hero by bricking a 20 footer at the buzzer.

4.  One of the big reasons the game was so fun to watch was its chippy nature.  Of course, nothing less should be expected with the Celtics in the building.  Their antics were on full display tonight.  Garnett was his usual assholey self; jawing with, and eventually elbowing Morrison at one point; fouling Carroll on a scramble for a loose ball and spending an excessive amount of time laying on top of him afterwards.  Oh, and his most annoying pseudo-intimidating move — you know, when he’s on defense, and there’s a foul call, and the offensive player will toss up a shot after the whistle, just because, and then Garnett jumps up and snatches the ball out of the air as it nears the basket? — yeah, he pulled that one tonight as well.

Pierce protested pretty much every call that didn’t go his way, nearly picking up a tech at one point.  Doc Rivers did pick up a tech for the same.  Kendrick Perkins continued to add to his league leading total of “menacing scowls”.  And Glen Davis was maliciously leaning hard into every pick he set.

The good news is that the Bobcats matched the Celtics antics with just the right amount of aggression and moxie; enough to stand up to the Celtics, and get themselves and the crowd going, but not so much that they took themselves out of the game.  Morrison matched Garnett’s jawing; Juwan Howard fouled Glen Davis hard on a break early in the fourth, drawing a flagrant 1; Felton stepped up to Davis after one of those bone jarring picks and drew a tech.  The crowd loved every bit of it.

5.  Gerald Wallace was great, with 23 points (7-17 FG, 8-8 FT!), 6 rebounds and 4 steals.  The points were nice (most came in the first half) and those steals were big, but what deserves particular mention is Wallace’s 3 assists.  Two of them were fantastic dishes in the paint that resulted in dunks for Okafor; one came in the first quarter, the other in the decisive overtime period.  Both were pretty uncharacteristic for Wallace, who is usually a black hole on offense.  Could it be that Larry Brown and Boris Diaw are really rubbing off on Crash?

6.  Okafor had a solid game, with 13 points and 17 rebounds (5 offensive); he didn’t get a lot of looks in the post and missed the ones he did get, but racked up tons of boards and put himself in position to get some easy buckets throughout the game.

7.  Adam Morrison certainly deserves mention.  He played his best game in several weeks, logging 15 minutes and scoring 13 points on 6-9 FG.  He got those buckets on a variety of shots: a layup (his first in ages), a runner, a step-back, and generally showed glimpses of the creative scoring that he was able to do in college.  Most encouragingly, only two of his attempts were standstill, spot-up threes — and he hit one of those.

8.  Rondophilia has been discussed plenty in the NBA blogosphere as of late (maybe so much that it’s jumped the shark), but let me add to the chorus.  That guy is great.  His speed, freakishly long arms, on-ball defense, and sense of pace/timing on offense are all excellent, and he showed it all tonight.  I was surprised to see that he had 9 turnovers — I don’t really remember them, but imagine that Celtics fans certainly do.  If/when Rondo adds a reliable jump shot, he’s an All-Star.

9.  ESPN and ESPNNews both gave a lot of airtime to the “What’s wrong with the Celtics?” meme tonight in conjunction with showing the highlights, and the same question has been asked repeatedly on the internet in recent days (especially in the context of the Marbury rumor), but I wouldn’t panic if I were them.  FIrst of all, to their credit, they really do usually get their opponent’s best effort every night.  Despite this, they started the year on fire, probably played their vets too many minutes, and are a bit worn out.  It took a West Coast road trip for everything to catch up with them.

Tonight, nothing really looked wrong with them — they still looked like a great team.  For some reason, over the past two seasons, they just seem to bring out the best in the Bobcats.

10.  No time to enjoy this win, as the Bobcats have to turn right around and play the other elite team in the East, this time on the road — @ Cleveland, Wednesday night.