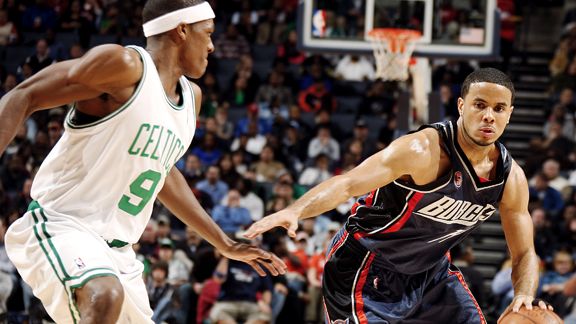 Is This What We’ve Been Waiting For?

The Bobcats dominated the second half to finish the night with a team record-setting win over the Raptors, 116 – 81. Never before had the Bobcats won by such a large margin – 35 pts.

In past seasons, the Cats were often stretched at the seams by Toronto’s quick, versatile and sharpshooting big men.  Chris Bosh had a great streak of abusing Emeka Okafor, and boosting his stats any time the clubs met.  Heading into this game, the trio of Bosh, Andrea Bargnani, and the newly-acquired Hedo Turkoglu looked to hurt Charlotte’s chance at even making this game competitive.

From the opening tip, the Bobcats showed no signs of intimidation from Bosh and Co.  Tyson Chandler set the tone for the Bobcats’ approach within the first minute of play.  Chandler followed a Wallace miss with an easy tap-in for the team’s first two points and then ran the floor to block Chris Bosh’s first shot attempt.  Those two plays forced the Raptors to do two things – hesitate around the rim and keep a man on Tyson. Chandler’s offensive stats don’t show his true presence and impact. Every other Bobcat on the floor benefitted from Toronto’s efforts to stay with both centers, Chandler and Mohammed.  Tyson’s six blocks sparked easy transition points and the Raptors seemed comfortable turning the ball over from start to finish.

For the entirety of the first quarter, the game went back-and-forth.  While no team held command early, there was a sense in the Bobcats’ attitude that they would take over the game at some stretch. Their slight lead at half-time was never threatened by Toronto after Gerald Wallace’s monster start to the second half.  The fluidity and rhythm that the Cats’ offense showed against the Raptors seemed like the complete antithesis of the struggles fans saw against Boston, Cleveland, or Orlando.  This version of the Bobcats showed aggression, speed, and style on offense.  Luckily, the pace of the game didn’t slow as the contest headed toward garbage time in the forth.  The final minutes were just about as entertaining as the rest of the game.  Charlotte worked hard for their Thanksgiving feast and sent the Raptors back to Toronto for whatever they do in Canada on the last Thursday of November.

The Charlotte Observer reported that Larry Brown has decided to slim down the team’s playbook and streamline the complications of their sputtering offense.  The main play featured in this contest was “dunk the ball.”  Just about every Bobcat got a chance to show some style of slam.  Gerald Wallace worked to showcase a highlight reel of dunks and had the crowd on their feet repeatedly.  Still, the “Gold Medal Dunk” came as rookie Derrick Brown turned a steal into a breakaway, two-handed reverse throw-down that had the Cats bench waving their towels around like helicopters.  The final dunk-fest highlight came in the closing garbage time minutes with a high alley-oop lob slam finished by Gerald Henderson.  It’s going to be great to watch this kid leap over the season.

Player of the Game

Gerald Wallace had a strong first half and set the tone of the offense with his continuous drives and cuts to the rim.  The Bobcats’ offense found a rhythm with his constant movement.  While fans have had to suffer through poor 3rd quarters in the past, this one was simply a flurry of Wallace drives and transition points.  G-Force took over early in the 3rd and never let up.  By the end of the period the game was sealed.  Wallace’s final line – 31 pts, 13 rebs, 2 blks.

Stephen Jackson’s 23 points were a great contribution to the team.  More importantly, his presence as an offensive threat kept the Raptors on their heels.  Also, Nazr Mohammed put on another solid performance – 11 pts, 9 rebs, 3 blks.  Whatever kept him on the bench last season was certainly shaken off over the summer.  This guy is really one of the better surprises of the season for Charlotte.

Derrick Brown and Gerald Henderson were inserted into the game for key stretches of the Bobcats success and both look fairly comfortable as pro basketball players.  Brown really shows tenacity in the paint and shows big potential on defense.  Henderson holds his own as a defender, but seems like he’s a month or two away from being a trusted offensive option.  Still, his speed and understanding of spacing keep him from falling to rookie mistakes.

Next Up : Cats take on the Cavs at the Cable Box this Friday night.  Be sure to get your tickets for the Lebron show and get a free Tyson Chandler growth chart.