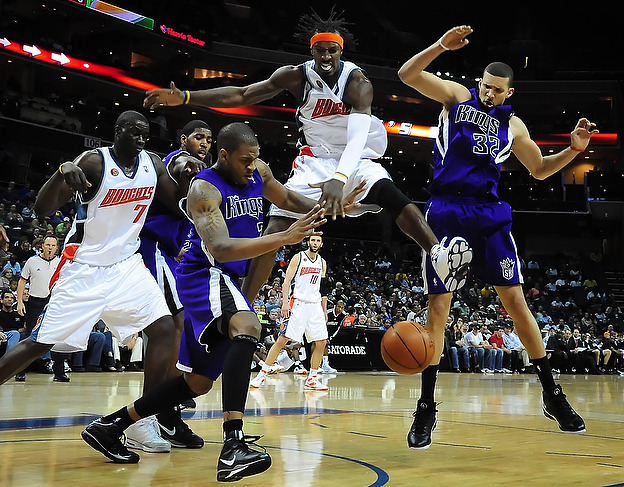 2.  So all day long on Wednesday, I’m having the hardest time remembering who in the hell the Bobcats are playing.  This never happens.  The Pacers?  No, that’s Saturday night.  T-Wolves?  No, already saw them earlier this year.  I know it’s a bad team from the Western Conference.  Grizzlies?  No, saw them already, too.  Finally found a minute to get on the internet and check — ah yes, the Kings!  That’s how forgettable the Kings are this season.

Meanwhile, my wife does know it’s the Kings and is desperately trying to find a way out of going.  As she later told me, she called her female counterpart of at least three couples we’re acquainted with throughout the day, trying to give up her ticket to one of their husbands.  No dice, so she begrudgingly went with me, then proceeded to play Scrabble on her iPhone the whole game.

Ladies and gentlemen, your 2008-09 Sacramento Kings!

3.  And as if the Kings weren’t already the least talented team in the league, they had to play without Kevin Martin tonight.  Martin apparently came down with a viral illness, and stayed back at the team hotel.  Nocioni was also out, so the Kings started Beno Udrih, Rashard McCants, Fransisco Garcia, Jason Thompson and Spencer Hawes.  I think my season ticket neighbor said it best: “I don’t know any of these guys!”

4.  Despite that, the Kings kept it much closer than they had any right to.  The Cats played a disjointed, ugly game and allowed the Kings to hang around far too long.  The league’s top sourpuss, Rashard “Born To Be Hated” McCants started in Martin’s place and took advantage of the extra PT with 30 points on 10-20 FG and 5-8 3PT.  However, as the Bobcats began to pull away in the fourth quarter, McCants turned an ankle on a drive and had to leave the game.  After that, the Cats finished the game on a 14-6 run to put it away.

5.  Here’s a good quote from Sacramento’s head coach Kenny Natt that sums up the Kings:

“We just have to get better production all around”

The Kings shot 39%, were outrebounded 52-28 by the Cats and played Calvin Booth for 12 minutes off the bench.  Ouch.

6.  Gerald Wallace led the Cats with 25 points (6-13 FG, 2-2 3PT, 11-11 FT!), 12 rebounds, 2 steals and 2 blocks.  He also caused those in attendance to have a collective heart attack when he went down in a heap in the second quarter.  He was trying to cut into the lane on a drive, but planted awkwardly and went down suddenly, holding his left knee.  The entire team surrounded him in concern while the crowd murmured.

The way he went down conjured up thoughts of achilles or patellar tendon tears, but when it was clear that he was holding his knee, my worries switched to ligament injuries.  Eventually Wallace was able to get up, bear weight (good sign), and limp to the locker room.

Then, much to no one’s surprise, Crash came out for the second half as if nothing had happened.  He did look a bit gimpy and tentative, but not dramatically so.  Postgame, the word is that there was talk of sending Wallace to the hospital at halftime (presumably for an MRI), but he refused and will instead have said MRI done on Thursday.  Right now, it’s just being called a sprain.

7.  Funny moment in the second quarter: Diop gets fouled, barely grazes front rim on his first free throw, completely airballs the second, drawing groans from the crowd.  Couple of minutes later he gets fouled again.  First free throw attempt results in his second straight airball. The crowd, obviously aware of his struggles, begins cheering.  Louder, louder still, then almost wildly as his teammates offer a little extra encouragement.  Finally, the cheers pay off as Diop drains the second free throw.

8.  One last word on the Kings.  My scouting report on rookie Donte Green:

#20 Green: likes to shoot — check that, loves to shoot

9.  Former Tarheel and current Pittsburgh Steelers freakshow kicker Jeff Reed was courtside near the Bobcats bench.  Unfortunately for Deadspin, he did not destroy any paper towel dispensers (that I know of).  He seemed to be enjoying the game in a pretty low-key manner.

10.  Milwaukee lost, but Chicago won on Wednesday night.  Thus, the Bulls stay solidly in the 8th spot; the Cats and the Bucks are now tied, 1.5 games back.  Next up for the Cats is a back-to-back at Toronto on Friday night, then back home hosting the Pacers Saturday night.  Gotta have both of ’em.