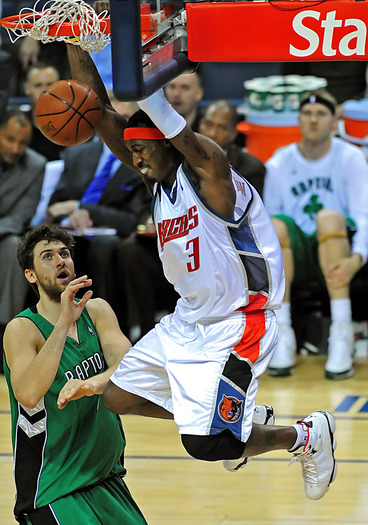 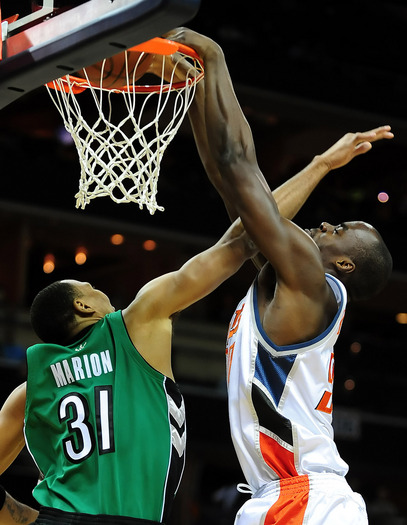 1.  The Bobcats end their three-game skid with a thorough beating of the Toronto Raptors, 112-86, on Monday night at the Cable Box.  AP story here, box score here.  The Cats improve to 29-38 overall, 19-16 at home, and more importantly, stay afloat in the race for the 8th playoff spot in the East.

2.  As the pics above show, the Raptors wore green unis in honor of St. Patty’s Day.  I’d love to relentlessly bag on them, but they actually looked pretty good.

Also, check Voskuhl in the background of the Gerald Wallace alley-oop shot sporting the warmup: a white longsleeve with green “Raptors” and a shamrock.  Red Auerbach is spinning in his grave right now.

3.  Save for a couple of minutes early in the first quarter, the Cats led this one from wire to wire and looked pretty good doing it.  Unlike the first two times these teams matched up back in November, Chris Bosh was held in check tonight.  CB4 only had 18 points (5-12 FG, 8-9 FT), but did dominate the boards with 14.  Overall, the Raptors shot poorly (38%, including 3-16 3PT).  (This morning’s film session must have helped.)

4.  Both Bosh and Calderon picked up technical fouls arguing calls.  Overall, the team looks like they were ready for the season to be over weeks ago.  And, so sad to see The Matrix like this: 12 points on 4-8 FG, 6 rebounds and 3 assists.  If Marion is Dirk Diggler, then this stint with the Raptors is definitely the “The Heat Will Rock You” segment.  Maybe next year will be like the scene where they try to rob/scam Alfred Molina.  Roko Ukic can play the little Asian boy with the firecrackers.

5.  I was honestly stunned to see that Andrea Bargnani had only 11 FGAs when I looked at the box score after the game.  It seemed like he was shooting the ball every other time down the court in person.  I would have bet a C-note that he shot over 20 times, yet the box score says only 11.

6.  For the Bobcats, everyone played pretty well.  A 16-4 run midway though the third quarter broke the game open, leaving the Cats with a 75-56 lead that they wouldn’t squander.  The Cats shot 49% from the field and 18-19 from the free throw line.  32 of the 44 baskets were assisted, versus only 12 turnovers on the night.  Pretty solid.

Despite shooting 1-7 3PTs, Radmanovic led the team with a robust +27 +/- in 31 minutes.  The 9 rebounds and 4 assists he notched probably had something to do with that.

8.  With the Bobcats in control early, Cartier Martin got some meaningful run in this one (9 points in 15 minutes).  Juwan Howard and Nazr Mohammed also got off the bench for a few minutes as well.  But the biggest applause was reserved for Sean May, who logged 3 minutes at the end of the game.  The fans ate it up as May went on a mini scoring binge of five points in garbage time.

In all seriousness, May looked OK out there — noticably thinner than he’s been in a long time.  And it was nice that none of the starters played 40 minutes.  In fact, only Felton and Wallace played over 30.

9.  New Jersey lost to Denver Monday night to fall to 2 full games back, while the rest of the 8th seed hopefuls were idle.

So Milwaukee and Chicago are tied for the 8th spot.  The Bobcats are 1 full game back, the Knicks 1.5.