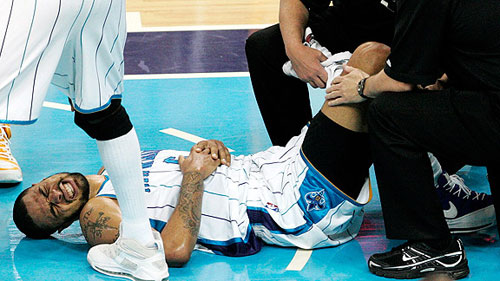 1. The Playoff Hunt is officially over for the Bobcats as they fall 84-81 to Chad Ford’s favorite team (OKC) Friday night.  The team stands at 35-44 with 3 games remaining in the season.

2. Ugly, ugly, ugly game for the Bobcats.  Charlotte shoots a combined 33% from the field (29 of 87) and commits 14 turnovers.  Quick question:
Name the 6 Charlotte Bobcats Players who shot:

Answer: The 6 guys who played the most.
The starters sucked it up bad and then DJ came in and sucked it up in reserve.  It wasn’t like the Thunder were playing Championship Defense (although the OKC broadcast team thought so).  The Bobcats as a team just couldn’t get the ball to stay in the basket.  I lost count of how many fast breaks, put-backs, easy 2-footers, etc that just didn’t fall.  And no disrespect to the Thunder, they played very good defense (notably 2008 Bobcat 2nd Round Pick Kyle Weaver on Gerald Wallace) but hardly the kind that should inspire 33% shooting.

Add this to the fact the OKC has about 37 first round picks in the next two drafts and we can all rest assured that Portland’s Kevin Pritchard will be receiving far less bon-bons and roses from Mr. Ford this June.

4. Jeff Green (btw) looks fantastic.  He finished the game with 10pts and 11rbs but scored his 5 buckets in every way imaginable.  Kristic was the real surprise though.  Even though he came back from Europe looking like a Rasho Nestorovich mannequin, the dude really lit it up with 19pts on 9-12 shooting and made Emeka look pretty useless all evening.

5. Speaking of Okafor, how is it biologically possible that a human being as atheletically endowed as Emeka can’t jump more than four inches off of the ground?  Someone please explain this to me.  Looking at the guy, you’d think that he’d be able to out-jump assistant coach Capel but in reality…  no dice.  And isn’t his inability to put back a shot (while jumping) completely incongruent with his proficiency at blocking opponents shots?  Rebounding?  I have a theory on Emeka and it goes something like this:
A few years ago Emeka Okafor read Malcolm Gladwell’s book “Blink.”  He then decided to dedicate his life to doing the opposite of whatever that book had to say.
I honestly think that Okafor is too damn intelligent for the NBA – his mind is just too analytical and he doesn’t have the ability to shut if off when he’s on the court.

6. OKC’s crowd went into this game (their home court finale) like it was Game 7 of the Finals.  Seeing the arena jam-packed and the crowd completely attentive and excited brought back some fond memories of the old Charlotte Coliseum and the glory days of LJ, ZO, and Muggsy.  [HEY!  RON GREEN, SR. stop hacking into my computer!]

7. Speaking of the old Hornets, OKC’s pre-game interviewer (their version of Stephanie Ready) is none other than Matt Pinto, who served as the Charlotte Hornets radio announcer (and Gerry Vallaincourt’s radio co-host) back in the early 90s.

8. Bright spots for the Bobcats?  Well, Dontell Jefferson came in and played very well in a cameo scoring 6pts in 6 minutes.  Other than that…well Radman had a steal in the open court early in the first and then finished it off with a reverse EURO-JAM! but then proceeded to brick a bunch of threes and get burned on defense by guys getting paid an eighth of what he does.  Hmm…more bright spots?  Maybe I’ll have some for you after Saturday night’s game in Chicago against the Bulls.

Till then, enjoy the loss Bobcats Fans…