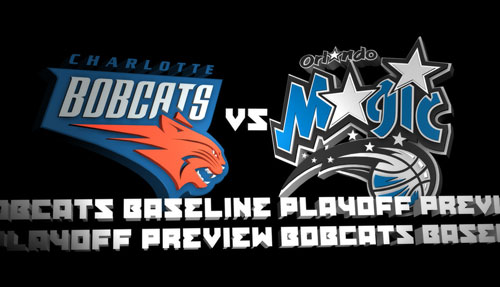 The final entry in our Round One Playoff Preview.

DrE: The coaching matchup is one where the Bobcats may be able to get a distinct leg up on the Magic.  Nothing against Stan Van Gundy — I mean, he got the Magic to the Finals last year — but you always feel like he’s just a couple exasperated tirades away from having his team tune him out.  Probably wouldn’t happen for another season or so, but I could imagine the seeds for it being planted in the playoffs this year.

One of the great things the Magic have that keeps the tightly wound Van Gundy from grating too much on his team is the happy-go-lucky, slightly immature personality of their star, Dwight Howard.  Coach and star are perfect foils for each other, keeping things balanced.

ASChin: SVG has proven himself as a top tier coach both with Heat and now with Magic.  His “Master of Panic” style may get him into some trouble with Big Ego alphas like Shaq but more reserved guys like Howard don’t seem to have a problem with him (yet).

As our friend Bonnell mentioned yesterday in his blog, Van Gundy utilizes a pro version of the old “4 Out, 1 In” offense.  As you’ll see from this excellent link at Coaches Clipboard, the 4-1 has traditionally been used for teams that have a lack of big men.  The strategy is to space the floor with shooters, pulling away defenders from the paint, and attack the basket through series of perimeter screens and picks.  The “1 In” has to pull double duty as the team’s only post player and offensive rebounder.  The strategy is unique in the NBA because teams running the 4-1 would generally get killed on the boards and in the paint on defense (from playing shooters at the “4” + having little interior help defense) and would have virtually no shot of securing an offensive rebound with just one man down low.
The Magic pull it off by having Dwight Howard as that man.

Obviously, defending the high pick and rolls and quick dives to the basket are key in defending the Magic.  Fortunately the Bobcats are one of the League’s best at it.  But they’ll have to be quick.  Theo Ratliff and Tyson Chandler have the quickness to defend Howard on those plays but I’m not so sure about Mohammed and Diop.  I could see Coach Brown substituting either Mohammed or Diop the moment Marcin Gortat checks into the game.  Actually Diop would be a decent candidate to take on Howard because of his size and Playoff experience (going back to Dallas a few years ago) but we just haven’t seen enough of him over the last couple of months to know where he’s at physically.

DrE: Larry Brown is several things: premier basketball teacher, great strategist, insecure leader, old guy who took a job in another city to redeem his reputation and is missing his family.

I fully expect Larry Brown to coach his heart out in this series.  It’s really the perfect situation for him.  Coaching from the underdog position, on the big stage of the playoffs, he has a chance to finally completely repair the damage that his time with the Knicks did to his reputation.

ASChin: Agreed.  It’s not often in the NBA that coaching has a chance to trump talent but with LB in there, I feel confident that the ‘Cats will be in it regardless of the Magic’s superior talent.  Take a look at this breakdown from NBA Playbook.  It’s an excellent frame by frame look at how D.J. Augustin nailed the clutch 3-pointer in New Orleans last week.  It shows the discipline that Brown has been able to instill in the team on offense.  Don’t get me wrong, Charlotte still has a long way to go.  They commit WAY TOO MANY TURNOVERS and are prone to settle for jumpers midway through games but when the stakes are high, the team has an uncanny ability to come through as we’ve seen from their big wins against the League’s elite (Lakers, Cavs, Magic, Jazz, Suns) this season.

DrE: It’s pretty easy to argue that the intangibles are in Charlotte’s favor as well.  There’s a lot of pressure on Orlando — they made it to the Finals last year, then had to make the tough decision to let Turkoglu go in free agency and bring in Vince Carter.  If they don’t at least get to the Conference Finals, this season will be a colossal disappointment.  And now they have to do it with Vince Carter — degree of difficulty is way higher!

Meanwhile, the Bobcats have great chemistry right now.  Say what you want about Stephen Jackson, but his teammates love him everywhere he’s been and Charlotte’s no exception.  Just look back to the infamous Jack-led 8-seeded Warriors first round upset of the Mavericks in the 2007 playoffs to see how his toughness can spread, especially against a team that shows signs of being soft.

ASChin: Hmmm.  Although the Bobcats aren’t an 8th seed like JAX’s Warriors a few years back, there are some similarities popping up again with Orlando.  The Magic are coming off a semi-unexpected Finals appearance in which they had a legitimate shot to win (see Dallas circa ’07), the Magic have basically been penciled in to make at least the Conference Finals again (as Dallas had just come off an outstanding regular season in ’07) and the Magic, like the Mavericks, seem to be a little too focused on Cleveland in Round 3 instead of worrying about the here & now of Round 1.

DrE: So you ready to make a prediction?  In the end, the Magic are just going to be too much, but I think the Bobcats will certainly make them sweat on their way out of the first round.  I say Magic in six.

ASChin: If the Magic take the series, I can’t see them winning in less than six games.  They ‘Cats just have too much fight in them.  I’m gonna go full-on Delano Little here and predict an upset.  Bobcats in six.  They’ll need to steal one of the first two in Orlando to do it but it’s possible.