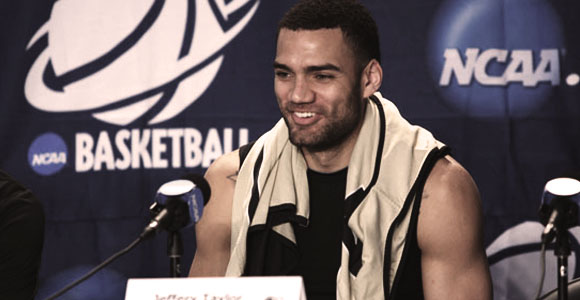 I watched the NBA draft last Thursday at my friend Reed’s house, and to my shock and surprise, Vanderbilt’s Jeff Taylor fell to the Bobcats in the second round. Baylor’s Quincy Miller may have had a higher upside at the 31st pick, but to have player ranked 15th overall by DraftExpress from my school snatched up by the Bobcats couldn’t have made me happier.

So when Reed’s dad came in to check on how the Bobcats blew yet another draft pick, I proudly told him: “we got Jeff Taylor, a small forward from Vandy!” He wasn’t nearly so excited, responding, “Oh yeah, well when’s the last time a Vanderbilt player was a messiah?”

It’s a good thing I didn’t tell him Taylor is from Sweden, too.

The second of two SEC small forwards taken by the Bobcats, Jeff Taylor doesn’t have the upside of Michael Kidd-Gilchrist, but he still should be a valuable role player—or even more. How can he help the Bobcats? In his own words, Taylor is “a guy that plays extremely hard on defense, can attack the basket and finish, and is also able to hit jump shots.” Really, Taylor fits right in with what Coach Mike Dunlap is looking for: energy, defense, athleticism, and shooting.

Despite being just 6’7” with a 6’6” wingspan, Jeff Taylor is one of the more incredible athletes of the draft. Only Darius Johnson-Odom, Marquis Teague, and Miles Plumlee bettered his 40-inch vertical jump, and only three players had less body fat than him (4.2%). Not just that, but Taylor tested in the 87th percentile of all players at the draft combine for bench press and agility drills.

Taylor’s main calling card is defense, where he really shined in the SEC. In his three games against Kentucky, he held Michael Kidd-Gilchrist to a 5.7 PPG and guarded every position except center. What’s more impressive, he earned three straight SEC All-Defensive Team honors thanks to opposing players making just 26.7% of jump shots against Taylor.

He’s not all defense, though; Taylor is a versatile scorer, too. He scores most of his points driving to the rim or in transition, but Taylor is also a very efficient jump shooter—something he’s improved upon each year at college. His 49.3% shooting, including 42.3% from beyond the arch, will be welcomed with open arms in Charlotte, where he can surely find his niche.

So what did the Bobcats find in their second round pick? They’ve got an elite athlete who can be a lock down defender and knock down long-range shots. He doesn’t have the potential to be a superstar like, say, LeBron James, but he can be an extremely valuable role player like Heat teammate Shane Battier.

Sure, Jeff Taylor is the “other” rookie small forward this season, and there’s no precedent for a Swedish Commodore in the NBA. But he should make an immediate impact on both sides of the ball and has the skills to be a building block going forward alongside MKG, Kemba Walker, Gerald Henderson, Bismack Biyombo, and four potential lottery picks over the next two years.