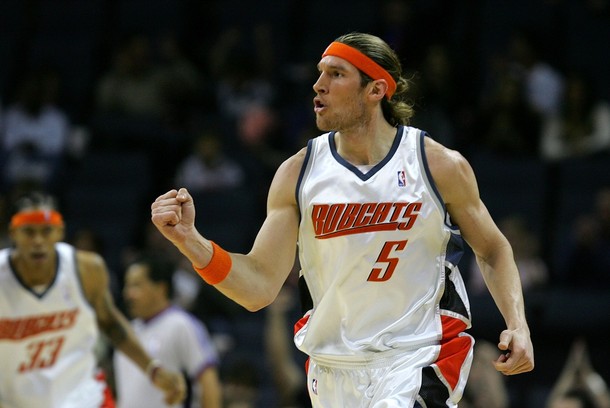 Herrmann In His First NBA Run With Charlotte

Will The Legend Return?

After browsing through the Baskonia section of noiciasdealava.com (Alava Daily News’ website) yesterday, I noticed a headline about former Charlotte Bobcat Walter Herrmann.  It looks like Herrmann has had talks with the Bobcats and could be returning to the NBA this fall. He’s a free agent and will likely come at a price that the Bobcats can fit into their payroll.

Here’s a link to the Google translated version of the story :
Water Herrmann terminated his contract and could return to the Charlotte Bobcats (English Translation)

For those that read Spanish a bit easier than I can:
Walter Herrmann rescinde su contrato y podría volver a los Charlotte Bobcats (Original Spanish Article)

Herrmann’s first NBA opportunity with Charlotte in 2006-2007 showed flashes of brilliance and potential. The following season, Herrmann was stuck on the bench by the bumbling head coach Sam Vincent. He was shipped off to Detroit with Primoz Brezec and played sparse minutes with the Pistons. There were certainly a few fans that loved Herrmann during his short stint with the Cats. To some, the “what could have been” speculations of Walter Herrmann became a kind of legend. It was the type of legend to add on top of the pile of other Bobcats mistakes. His physical abilities, energy and long-range shooting settled into a sore spot for everyone that questioned the Nazr Mohammed trade.

If Walter Herrmann does return to Charlotte, does this signal another roster move at the Power Forward spot?

Also we have to wonder, will Walter Herrmann will be the best NBA Player ever?